Comments (0)
Add to wishlistDelete from wishlist
Cite this document
Summary
A country's economic growth may be defined as a long-term rise in capacity to supply increasingly diverse economic goods to its population, this growing capacity based on advancing technology and the institutional and ideological adjustments that it demands.1
…
Download full paperFile format: .doc, available for editing
HIDE THIS PAPERGRAB THE BEST PAPER92.2% of users find it useful 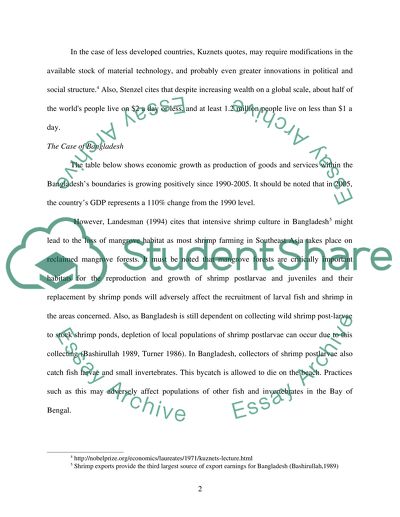 Extract of sample "Negative Consequences of Economic Growth in Bangladesh"

Download file to see previous pages Environmental damage is also inextricably linked to two widening gaps that go hand-in-hand: the gap between rich and poor and the gap between developed and developing countries (Stenzel, 2002). This is commonly referred to as the imbalance in a nation's income distribution. Economic growth is seen to widen the gap between the income of rich and poor.
Kuznets (1971) cites that one intriguing aspect of structural change brought by economic growth is that it represents shifts in the relative shares in the economy of the specific population groups attached to particular production sectors. Economic growth perforce brings about a decline in the relative position of one group after another - of farmers, of small scale producers, of landowners - a change not easily accepted, and, in fact, as history teaches us, often resisted. The continuous disturbance of pre-existing relative position of the several economic groups is pregnant with conflict - despite the rises in absolute income or product common to all groups.3
In the case of less developed countries, Kuznets quotes, may require modifications in the available stock of material technology, and probably even greater innovations in political and social structure.4 Also, Stenzel cites that despite increasing wealth on a global scale, about half of the world's people live on $2 a day or less, and at least 1.2 million people live on less than $1 a day.
The Case of Bangladesh
The table below shows economic growth as production of goods and services within the Bangladesh's boundaries is growing positively since 1990-2005. It should be noted that in 2005, the country's GDP represents a 110% change from the 1990 level.
However, Landesman (1994) cites that intensive shrimp culture in Bangladesh5 might lead to the loss of mangrove habitat as most shrimp farming in Southeast Asia takes place on reclaimed mangrove forests. It must be noted that mangrove forests are critically important habitats for the reproduction and growth of shrimp postlarvae and juveniles and their replacement by shrimp ponds will adversely affect the recruitment of larval fish and shrimp in the areas concerned. Also, as Bangladesh is still dependent on collecting wild shrimp post-larvae to stock shrimp ponds, depletion of local populations of shrimp postlarvae can occur due to this collecting (Bashirullah 1989, Turner 1986). In Bangladesh, collectors of shrimp postlarvae also catch fish larvae and small invertebrates. This bycatch is allowed to die on the beach. Practices such as this may adversely affect populations of other fish and invertebrates in the Bay of Bengal.
In terms of income distribution, we can see that Bangladesh bulk of the country's wealth is concentrated in the hands of the upper class. The most recent data on income distribution cites that during 2006, which the highest 10% in the population accounts for almost 28.96% of the total income while the lowest 10% holds a meager 3%. This is further aggravated by the recent economic development which puts a high concentration of growth in income in the hands of elite (Economy of Bangladesh, 2006).
Eutrophication of surrounding coastal areas from nutrients discharged in shrimp pond effluents is a looming problem on the water areas concerned in Bangladesh, which is especially true for intensive shrimp culture systems for the high feeding, fertilization and water exchange rates require frequent discharge ...Download file to see next pagesRead More
Share:
Tags
Cite this document
(“Negative Consequences of Economic Growth in Bangladesh Essay”, n.d.)
Negative Consequences of Economic Growth in Bangladesh Essay. Retrieved from https://studentshare.org/miscellaneous/1532950-negative-consequences-of-economic-growth-in-bangladesh

“Negative Consequences of Economic Growth in Bangladesh Essay”, n.d. https://studentshare.org/miscellaneous/1532950-negative-consequences-of-economic-growth-in-bangladesh.
Comments (0)
Click to create a comment or rate a document

CHECK THESE SAMPLES OF Negative Consequences of Economic Growth in Bangladesh

... economy and national culture (Mittelman, 2000). World Economic Forum and Davos 2010 The theme of this annual meeting is to improve the state of the world and rethink, redesign and rebuild. This annual meeting was to rethink the business models, financial innovation and risk management. This rethinking is sought to trigger redesign attempts at the institutions at the national and international levels. The aim of redesign is to close the gaps in governance, prevent systemic failures and restore growth. This effort requires common vision, collaborative innovation and public-private partnership to succeed in the long term. The prerequisite would be to rebuild trust. The meeting focused on the following six areas of enquiry: 1. strengthening...
7 Pages(1750 words)Coursework

President Andrew Jackson led an example of an administration that set the stage for the way in which James Polk would lead. In 1817, as a still yet military leader, Jackson led the United States into the first of three conflicts with the Seminole Indians from which the acquisition of Florida from Spain would be negotiated and finalized. The situation with Spain was tenuous and should have been dealt with in a diplomatic and cautious manner, but in 1817 President Monroe wrote a letter to General Jackson stating that “Great interests...
8 Pages(2000 words)Article
sponsored ads
Save Your Time for More Important Things
Let us write or edit the essay on your topic "Negative Consequences of Economic Growth in Bangladesh" with a personal 20% discount.
GRAB THE BEST PAPER

Let us find you another Essay on topic Negative Consequences of Economic Growth in Bangladesh for FREE!