Comments (0)
Add to wishlistDelete from wishlist
Cite this document
Summary
Right to live is certainly associated with the right by birth and is one of the laws of nature. It is the inherent right of every creature, including a human being. All men are created equal and independent and the duty of the sovereign is to preserve the life, liberty and the well being of its subjects…
Download full paperFile format: .doc, available for editing
HIDE THIS PAPERGRAB THE BEST PAPER93.7% of users find it useful 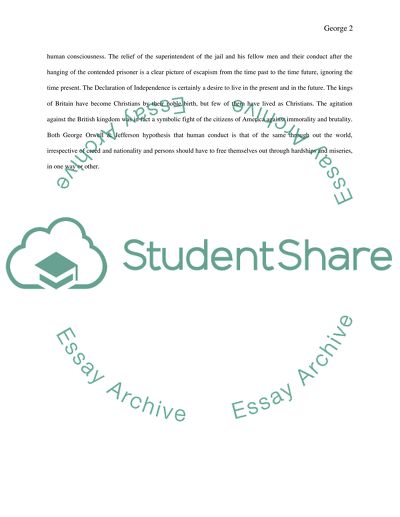 Manju George George Thomas Essay Comparison-V01 08 April 2009 Man is to err & the other is Divine Right to live is certainly associatedwith the right by birth and is one of the laws of nature. It is the inherent right of every creature, including a human being. All men are created equal and independent and the duty of the sovereign is to preserve the life, liberty and the well being of its subjects. When the subjects are disposed to suffer abuses, usurpations, it is their right much less their duty to throw off such authority and to provide new guards for their future security. Unfortunately, democracy usually gives way to monarchy and tyranny on the guise of achieving this goal, upholding the mighty ends.

In, 'Hanging' George Orwell has drawn a picturesque representation of the last minutes of a condemned prisoner, and also the relief of the authorities after finishing their task of execution. It goes without saying that the executants were executing the orders given by their superior authorities. Submitting without protest in a helpless state doesn't mean surrendering of one person and his will, before another. While his own nationals and fellow men didn't show any sort of sympathy or leniency to the condemned prisoner, George Orwell says that his dog hesitated to part with him during his last moments. George Orwell has put forth a question before us whether law is for man or man is for law If one cannot give life, has he got the right to take it away
In Declaration of Independence, Thomas Jefferson has very clearly depicted the denial of natural rights to the American Citizen by the British sovereign. The British king has denied the natural rights of the American citizen, ignored the laws of their land and by self assumed power he was imposing his will and desire over a nation for decades together. The American War of Independence is a red-letter mark in the history of the world and those events will remain engraved in the hearts of millions of people. The last moments of the condemned prisoner, his helpless condition, his submission to the mighty, with a prayer to his almighty 'Rama' is certainly moments pricking human consciousness. The relief of the superintendent of the jail and his fellow men and their conduct after the hanging of the contended prisoner is a clear picture of escapism from the time past to the time future, ignoring the time present. The Declaration of Independence is certainly a desire to live in the present and in the future. The kings of Britain have become Christians by their noble birth, but few of them have lived as Christians. The agitation against the British kingdom was in fact a symbolic fight of the citizens of America against immorality and brutality. Both George Orwell & Jefferson hypothesis that human conduct is that of the same through out the world, irrespective of creed and nationality and persons should have to free themselves out through hardships and miseries, in one way or other.
Works Cited
1. A Hanging Essay:
2. Declaration of Independence
Read More
Share:
Tags
Cite this document
(“Natural Rights, Essay Example | Topics and Well Written Essays - 500 words”, n.d.)
Natural Rights, Essay Example | Topics and Well Written Essays - 500 words. Retrieved from https://studentshare.org/miscellaneous/1532828-natural-rights

CHECK THESE SAMPLES OF Natural Rights,

... international treaties that affirm human rights, and that these are binding on the signatory states. An assessment regarding the binding nature of the provisions of the UDHR was made in this work. The UDHR was instrumental in the development of international law, specifically the International Covenant on Civil and Political Rights (ICCPR) and the International Covenant on Economic, Social and Cultural Rights (ICESCR). Furthermore, the role of ICCPR and ICESCR, which derive from the UDHR were examined. This was done by referring to case law and opinions of various authors. It also analysed UN Charter provisions, such as the preamble, Article 1(3), 2, 13(1), 51, 55, 56, 62(2) and 68.3 This work arrived at conclusions, by establishing...
8 Pages(2000 words)Case Study
sponsored ads
Save Your Time for More Important Things
Let us write or edit the essay on your topic "Natural Rights," with a personal 20% discount.
GRAB THE BEST PAPER

Let us find you another Essay on topic Natural Rights, for FREE!