Comments (0)
Add to wishlistDelete from wishlist
Cite this document
Summary
While I was working as a lower level manager at a major financial service center, a recently hired upper manager dictated a new formula for calculating workers' productivity. The new method was inherently flawed and actually rewarded the least productive employees, while the best employees were penalized…
Download full paperFile format: .doc, available for editing
HIDE THIS PAPERGRAB THE BEST PAPER97% of users find it useful 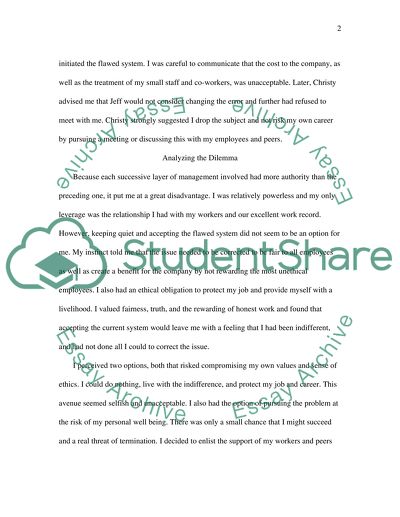 Download file to see previous pages I also had a duty to the company to correct the problem as it had resulted in unproductive workers "working the process" to give the illusion of an acceptable level of work. It was damaging to company profits as well as employee morale. There was also the obligation I had to myself, which was to do the right thing and present a creative solution when I pointed out the problem.
I felt confident confronting this issue, for as Vallance (1995) points out, "Ordinary decency and distributive justice are, then, the central ethical principals of corporate governance" (p. 135). Initially I pointed out the problem to Pamela, my immediate supervisor. She could readily see what the issue was and was in total agreement that the problem needed addressed. I offered her a simple and elegant solution. I later met with Christy, Pamela's manager, and reiterated the same information I had presented in the earlier meeting. Christy said she would meet with Jeff, the newly hired manager who had initiated the flawed system. I was careful to communicate that the cost to the company, as well as the treatment of my small staff and co-workers, was unacceptable. Later, Christy advised me that Jeff would not consider changing the error and further had refused to meet with me. Christy strongly suggested I drop the subject and not risk my own career by pursuing a meeting or discussing this with my employees and peers.
Analyzing the Dilemma
Because each successive layer of management involved had more authority than the preceding one, it put me at a great disadvantage. I was relatively powerless and my only leverage was the relationship I had with my workers and our excellent work record. However, keeping quiet and accepting the flawed system did not seem to be an option for me. My instinct told me that the issue needed to be corrected to be fair to all employees as well as create a benefit for the company by not rewarding the most unethical employees. I also had an ethical obligation to protect my job and provide myself with a livelihood. I valued fairness, truth, and the rewarding of honest work and found that accepting the current system would leave me with a feeling that I had been indifferent, and had not done all I could to correct the issue.
I perceived two options, both that risked compromising my own values and sense of ethics. I could do nothing, live with the indifference, and protect my job and career. This avenue seemed selfish and unacceptable. I also had the option of pursuing the problem at the risk of my personal well being. There was only a small chance that I might succeed and a real threat of termination. I decided to enlist the support of my workers and peers on the issue and had several conversations with them in reference to the inherent unfairness of the new system. It had become clear that I would either get the formula changed for the benefit of everyone, or be let go to the detriment of myself. My limited authority and power were ineffective at altering management's top-down directive leadership style or their unreasonable policy.
The Outcome of the Dilemma
Though I was able to get the support of the workers and other middle managers, that small power base was not adequate to deal with the authority of the upper staff. It further aggravated the situation and resulted in an acrimonious attitude towards me. I was viewed as a troublemaker ...Download file to see next pagesRead More
Share:
Tags
Cite this document
(“The Professional Workplace Dilemma Essay Example | Topics and Well Written Essays - 750 words”, n.d.)
The Professional Workplace Dilemma Essay Example | Topics and Well Written Essays - 750 words. Retrieved from https://studentshare.org/miscellaneous/1532689-the-professional-workplace-dilemma

CHECK THESE SAMPLES OF The Professional Workplace Dilemma

Freedom of Association in the Workplace

As pointed out by O’Connor J, “if the judicial power of the commonwealth is to be effectively exercised by way of conciliation and arbitration in the settlement of industrial disputes, it must be by bringing it to bear on representative bodies standing for groups of workmen….”  The observations made by O’Connor indicate that unions are necessary to redress the inherent power imbalance that exists between employer and employee and to provide effective representation for employees in the resolution of disputes.

Freedom of association under the Australian Workplace Relations Act 1996 provides the freedom to employers, employees as well as independent contractors, to join or not join indu...
6 Pages(1500 words)Term Paper

The chemically-impaired nurse is a nurse who has a substance-addiction problem. These substances include drugs and/or alcohol. These nurses usually have impaired functions because of their addiction to drugs or alcohol and their nursing practice is often compromised as a result of their addiction (Ellis & Hartley, 2004). A study conducted by Sullivan and colleagues in the 1980s revealed that substance addiction problems are about as great as the percentage for substance addiction in the general population (as cit...
7 Pages(1750 words)Coursework

Age discrimination is an equally critical issue as these other discrimination forms and possesses significant impacts in the workforce (Giacalone, 2012, p.167).
For instance, age discrimination in the workplace has significantly reduced the manpower capabilities within an organization, thereby negatively impacting the productivity and profit maximization within the business association (Snape & Redman, 2003, p.80). Additionally, age discrimination has compelled some business organizations into bad reputations, thereby impacting significantly on clientele loyalty. This means that such firms may have reduced sales, and consequently reduced profits.
Age discrimination comes in two aspects of business organizations. Orga...
6 Pages(1500 words)Case Study
sponsored ads
Save Your Time for More Important Things
Let us write or edit the essay on your topic "The Professional Workplace Dilemma" with a personal 20% discount.
GRAB THE BEST PAPER

Let us find you another Essay on topic The Professional Workplace Dilemma for FREE!