Comments (0)
Add to wishlistDelete from wishlist
Cite this document
Summary
Soccer is undoubtedly the most intriguing game, it is the most popular game played in the world. Football clubs like Manchester United, Chelsea, and Arsenal are some of the most popular football clubs all across the globe. The likes are Barcelona, Real Madrid are also equally popular…
Download full paperFile format: .doc, available for editing
HIDE THIS PAPERGRAB THE BEST PAPER98.1% of users find it useful 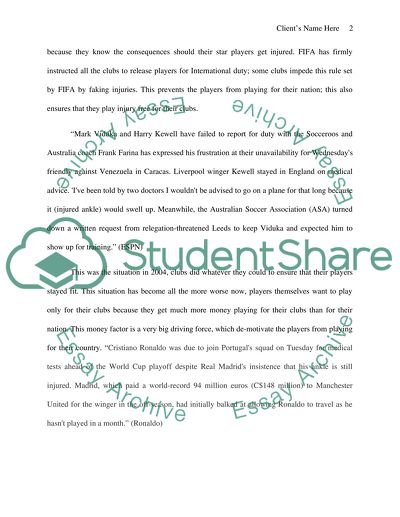 Download file to see previous pages The recent injury to Robin Van Persie will keep him out for five long months; he picked up this injury playing for his national team Holland. He plays for Arsenal in the Barclays Premier League and his club lost to Chelsea yesterday. He would have made some difference had he been on the field. Arsene Wenger the manager of Arsenal must be feeling hard done by and this situation is very common. Even Wayne Rooney was injured on international duty and missed several games for Manchester United. Christiano Ronaldo is another player who was injured playing for Portugal and as an inevitable result of which missed several games for his present club Real Madrid. The managers of these illustrious clubs unwillingly release players because they know the consequences should their star players get injured. FIFA has firmly instructed all the clubs to release players for International duty; some clubs impede this rule set by FIFA by faking injuries. This prevents the players from playing for their nation; this also ensures that they play injury free for their clubs.
"Mark Viduka and Harry Kewell have failed to report for duty with the Socceroos and Australia coach Frank Farina has expressed his frustration at their unavailability for Wednesday's friendly against Venezuela in Caracas. Liverpool winger Kewell stayed in England on medical advice. 'I've been told by two doctors I wouldn't be advised to go on a plane for that long because it (injured ankle) would swell up. Meanwhile, the Australian Soccer Association (ASA) turned down a written request from relegation-threatened Leeds to keep Viduka and expected him to show up for training." (ESPN)
This was the situation in 2004, clubs did whatever they could to ensure that their players stayed fit. This situation has become all the more worse now, players themselves want to play only for their clubs because they get much more money playing for their clubs than for their nation. This money factor is a very big driving force, which de-motivate the players from playing for their country. "Cristiano Ronaldo was due to join Portugal's squad on Tuesday for medical tests ahead of the World Cup playoff despite Real Madrid's insistence that his ankle is still injured. Madrid, which paid a world-record 94 million euros (C$148 million) to Manchester United for the winger in the off-season, had initially balked at allowing Ronaldo to travel as he hasn't played in a month." (Ronaldo)

According to the rules set by FIFA a club cannot stop international authorities from conducting fitness tests on a player, fitness tests were conducted on Ronaldo too and it was found that he was seriously injured. Portugal qualified after playing the World Cup play off but this again goes to show the breach of rules set by the governing body of football. "Ronaldo was hurt during Madrid's Champions League match with Marseille on Sept. 30. He then aggravated the injury while playing for Portugal in a World Cup qualifier against Hungary on Oct. 10 and hasn't played since. The Portuguese Football Federation said all other players from Spanish clubs must travel to Portugal on Wednesday, after Tuesday's Copa del Rey matches." (Ronaldo)
The African cup of nations is another tournament that brings out this tug of war between clubs and countries. This January the African Cup of Nations ...Download file to see next pagesRead More
Share:
Tags
Cite this document
(“International Football Management Essay Example | Topics and Well Written Essays - 1250 words”, n.d.)
International Football Management Essay Example | Topics and Well Written Essays - 1250 words. Retrieved from https://studentshare.org/miscellaneous/1532390-international-football-management

Civil Aviation Administration of China (CAAC) – undoubtedly advanc...
7 Pages(1750 words)Assignment
sponsored ads
Save Your Time for More Important Things
Let us write or edit the essay on your topic "International Football Management" with a personal 20% discount.
GRAB THE BEST PAPER

Let us find you another Essay on topic International Football Management for FREE!