Comments (0)
Add to wishlistDelete from wishlist
Cite this document
Summary
The whole discussion of opportunism is a post war analysis of the intentions of Great Britain's delay of opening the culminating cross channel attack so as to bring a speedy end to the war…
Download full paperFile format: .doc, available for editing
HIDE THIS PAPERGRAB THE BEST PAPER96.2% of users find it useful 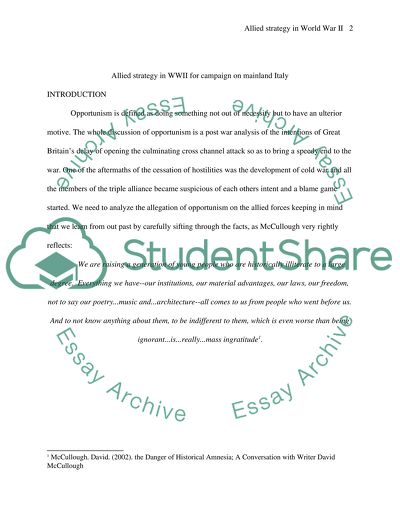 Download file to see previous pages We are raising a generation of young people who are historically illiterate to a large degree. Everything we have--our institutions, our material advantages, our laws, our freedom, not to say our poetry...music and...architecture--all comes to us from people who went before us. And to not know anything about them, to be indifferent to them, which is even worse than being ignorant...is...really...mass ingratitude1.

The allied invasion of mainland Italy began in September 1943. General Harold Alexander's 15th Army Group was responsible for starting this invasion. The first step was invasion of Sicily. This was completed successfully during the campaign.

How did it all start After the defeat in North Africa, the differences between the axis powers began to grow. The next strategic step of the allied forces was now not clear. Winston Churchill said the next step should be to invade Italy. He wanted to remove the influence of Regia Marina on Italy. The invasion of Italy would open the routes for the allied forces to enter the Mediterranean. The entrance in the Mediterranean was important as later on it could give way to the allied forces to enter Middle East and Far East. Another important reason for this was the increase in supply from America and Britain. This invasion would also help stop Germans who were planning to execute operation Overload. Operation overload was about invading Normandy. General George Marshall was against this operation. He did not want to delay the operation overload in any circumstances. However, when no solution could be made and differences started to grow, it was planned that first Sicily should be invaded .
Joint Allied Forces Headquarters AFHQ planned out all of this operation.
They ordered the invasion of Sicily and the Italian mainland.
Operation Husky, or in other words the invasion of Sicily began in July 1943. It was a very successful operation. Many of the allied forces escaped to the mainland Italy. Benito Mussolini was overthrown by a rebellion. He was the head of the Italian government. The actions were quick and swift. They thought that Italy would surrender if a quick invasion is done. However, they did not know that Italians and Germans together will be very strong. Even after Berlin was invaded, the Italians put up really good. The allied forces were now in a difficult position. They now had to provide food and other supplies to the troops in Italy.
Germany was putting up resistance too. In fact it was because of the Germans that the Italians felt so strong. Even though Germans whole economy was at war too, they were putting up a lot of resistance. According to Milward "here was little that was new and less that was orderly in the New Order"3.Solely in economic terms, the new German Empire in Europe would have been a large-scale structure organized for, and run on the principles of, a colonialism of the crudest kind. Germany's economic policy toward occupied countries can in essence be summed up in two terms: exploitation and colonization.
"Anti-Semitism as a political movement neither can nor should be based on fleeting emotions, but on the acceptance of ...Download file to see next pagesRead More
Share:
Tags
Cite this document
(“Allied strategy in WWII for campaign on mainland Italy Essay”, n.d.)
Allied strategy in WWII for campaign on mainland Italy Essay. Retrieved from https://studentshare.org/miscellaneous/1531761-allied-strategy-in-wwii-for-campaign-on-mainland-italy

“Allied Strategy in WWII for Campaign on Mainland Italy Essay”, n.d. https://studentshare.org/miscellaneous/1531761-allied-strategy-in-wwii-for-campaign-on-mainland-italy.
Comments (0)
Click to create a comment or rate a document

... WWII U boat Campaign Germany built its first U submarine in 1905. U-boats were effectively employed during Second World War in the Atlantic Ocean until allied implemented antisubmarine tactics to counter the U-boat threats to its merchant and naval fleets. German boats were equipped with 5 torpedoes and one main gun (Russell 122). U- Boats were mainly constructed for intelligence gathering of enemy movement and for launching special operations. German war planners very efficiently used U-boats to threaten and ultimately target the royal and merchant navy. U-boats sunk Royal navy and merchant ships sunk in huge numbers in different occasions. Restrictions of “treaty of Versailles” could not compel German navy to do away with submarine...
4 Pages(1000 words)Term Paper

The first step namely the strategy formulation involves the development of the business mission, evaluation of the opportunities and threats faced by the business organization in the business, by using tools such as SWOT analysis, examining the s...

Let us look at the trends observed in the business of the steel industry. The trend in the steel industry is very dynamic and always impacted by internal and extraneous factors. For almost 50 years the United States of America reigned in the industry of steel production, almost half of the entire p...
8 Pages(2000 words)Case Study
sponsored ads
Save Your Time for More Important Things
Let us write or edit the essay on your topic "Allied strategy in WWII for campaign on mainland Italy" with a personal 20% discount.
GRAB THE BEST PAPER

Let us find you another Essay on topic Allied strategy in WWII for campaign on mainland Italy for FREE!