Comments (0)
Add to wishlistDelete from wishlist
Cite this document
Summary
Mr. S, is a 73 y/o widower, whose c/c is swelling in bilat. LE & a weight gain of 26 pounds in a "short period of time". Pt also complains of occasional SOB relieved by rest. Pt feels that he "actually is in pretty good health because of all of the time spent outdoors"
…
Download full paperFile format: .doc, available for editing
HIDE THIS PAPERGRAB THE BEST PAPER94.2% of users find it useful 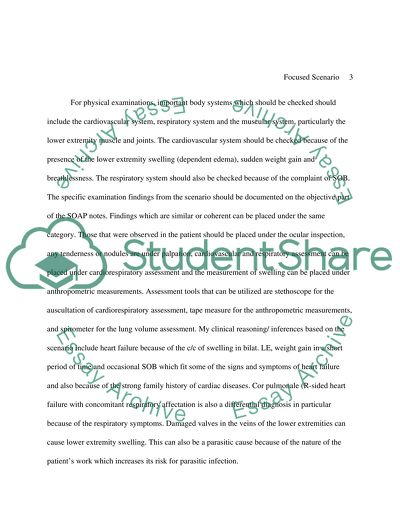 Focused Scenario Running head: FOCUSED SCENARIO "Focused Scenario" In APA Style Focused Scenario 2 Mr. S, isa 73 y/o widower, whose c/c is swelling in bilat. LE & a weight gain of 26 pounds in a "short period of time". Pt also complains of occasional SOB relieved by rest. Pt feels that he "actually is in pretty good health because of all of the time spent outdoors"
Family Hx> Pt's father died of CVD at age 54 and pt's mother died of breast CA at age 65. Pt's grandfather died of hypertension at age 97. Pt lives with his 47 y/o daughter, 54 y/o son-in-law and 26 y/o twin grandsons in his 145 acre farm.
Social Hx> Pt drinks 2-3 beers in the evening p dinner. Pt's food intake is from organic food produced from the animals and fruits & vegetables on his farm.
Occupational Hx> Pt works by helping the 6 farmhands and his family in managing the farm for the past 52 years.
This scenario lacks very important information which should be gathered during the health history/interview process. As for this patient, or for any patient for that matter, it is vital that the past medical history of the patient should be asked as to the diagnosis, date of onset, duration and medical management. The chief complaint was present, however, it still lacked in some aspects such as the onset of the complaint, duration and precipitating and relieving factors (though in this scenario, one relieving factor was given for the SOB). Lloyd & Craig (2007) noted that the medication history of the patient is "crucially important" and should not only consider the current medications but include as well past medications. For this patient, history of smoking or for any smokers in the household should be asked because of his cardiovascular risk.
Focused Scenario 3
For physical examinations, important body systems which should be checked should include the cardiovascular system, respiratory system and the muscular system, particularly the lower extremity muscle and joints. The cardiovascular system should be checked because of the presence of the lower extremity swelling (dependent edema), sudden weight gain and breathlessness. The respiratory system should also be checked because of the complaint of SOB. The specific examination findings from the scenario should be documented on the objective part of the SOAP notes. Findings which are similar or coherent can be placed under the same category. Those that were observed in the patient should be placed under the ocular inspection, any tenderness or nodules are under palpation, cardiovascular and respiratory assessment can be placed under cardiorespiratory assessment and the measurement of swelling can be placed under anthropometric measurements. Assessment tools that can be utilized are stethoscope for the auscultation of cardiorespiratory assessment, tape measure for the anthropometric measurements, and spirometer for the lung volume assessment. My clinical reasoning/ inferences based on the scenario include heart failure because of the c/c of swelling in bilat. LE, weight gain in a short period of time and occasional SOB which fit some of the signs and symptoms of heart failure and also because of the strong family history of cardiac diseases. Cor pulmonale (R-sided heart failure with concomitant respiratory affectation is also a differential diagnosis in particular because of the respiratory symptoms. Damaged valves in the veins of the lower extremities can cause lower extremity swelling. This can also be a parasitic cause because of the nature of the patient's work which increases its risk for parasitic infection.
Focused Scenario 4
References
Lloyd H, & Craig S. (2007). A guide to taking a patient's history. Nursing Standard (Royal College of Nursing (Great Britain) : 1987). 22 (13), 5-11. Read More
Share:
Tags
Cite this document
(“Nursing High School Case Study Example | Topics and Well Written Essays - 500 words”, n.d.)
Nursing High School Case Study Example | Topics and Well Written Essays - 500 words. Retrieved from https://studentshare.org/miscellaneous/1531405-nursing-high-school-case-study

...: Surveys that have been conducted on drug use among students shows that 52% of senior school students have tried cannabis and 15% report that they use it regularly*16. Therefore, the concerns the school has about the use of drugs among its students would appear to be well grounded. In order to prevent the disciplinary and other problems that arise out of drug use by students, many school bodies are resorting to expelling students who pass on drugs to other students. This reduces a young person’s opportunities in life and is a causal factor in other related problems.*17 Although some schools have commenced random drug testing, some experts are of the view that random drug testing at schools is likely to damage the trust and communication...
16 Pages(4000 words)Case Study

Nursing Care of an Orthopaedic Patient

Willow had a fall at home. An ambulance was called and the paramedics on arrival found her in extreme discomfort due to pain in her left hip and leg. They assessed Mrs. Willow, immobilized the left leg and gave her an analgesic injection to reduce her discomfort. The ambulance brought her to the local hospital and Mrs. Willow was presented to the Accident and Emergency department of a local hospital.
The attending doctor examined her. He found her in extreme pain, and the left leg could not sustain her weight and there was abnormal mobility of the left leg, raising a suspicion of a sub-trochanteric femur fracture (McRae 1989). The abnormal; immobility was identified, as the left leg could be externally rotated and abducted a...
11 Pages(2750 words)Case Study

As a result, the school asked the boys to stay away from school till the investigation was completed and Ali was thus excluded from school for successive periods from 9th March to 6th June 2001. Schoolwork was sent to the defendant’s home and he was allowed to sit for his SAT tests between 8th and 14th May 2001. The school then referred the student to the LEA for the continuation of his education with no further work being assigned to the student by the school after 14th May.
On 18th June 2001, the Prosecution informed Ali’s solicitors that the case was being discontinued for lack of evidence and this was formally executed the following day. The respondent approached the school with his brother and requested re-e...
6 Pages(1500 words)Case Study

The Provision of High-Quality Education

... Impact of Social on College Success Success exists as an equal shot to all in a perfect world. This can be achieved through the provision of high quality education by excellent schools that employ highly qualified educators. Conversely, research has proven that a student’s social class can greatly influence success in the field he or she is studying. As a result, a clear correlation exists between a student with low socioeconomic background and academic progress. Low or no academic progress could result into problems in the student’s life, for instance, unemployment, accepting employment on a low wage job or dropping out of college (Eimers and Pike 84). This paper will examine the traditions in which students’ upper or lower social...
9 Pages(2250 words)Case Study
sponsored ads
Save Your Time for More Important Things
Let us write or edit the case study on your topic "Nursing High School Case Study" with a personal 20% discount.
GRAB THE BEST PAPER

Let us find you another Case Study on topic Nursing High School Case Study for FREE!