Comments (0)
Add to wishlistDelete from wishlist
Cite this document
Summary
The major influence in the early colonial period was from the immigration of Puritans into the colonies. Under the early rule of John Winthrop, the newly elected governor, the Puritans established the Massachusetts Bay Company…
Download full paperFile format: .doc, available for editing
HIDE THIS PAPERGRAB THE BEST PAPER95.7% of users find it useful 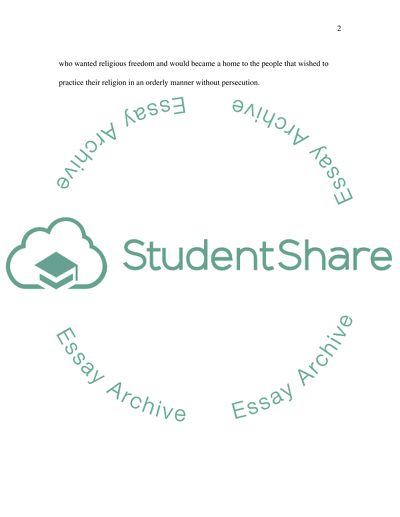 Download file to see previous pages They believed that material success was God's reward for honorable behavior. These early beliefs were transformed into the laws of the land in regards to the economic system of capitalism and morality laws. The Puritan movement in the colonies also had the effect of geographically dispersing those that disagreed with the concept of the church as state.
The Quakers were one of the early settlers that moved to escape the Puritan law. They believed that religion was more individualistic and split away to form new colonies, most notably Pennsylvania. These traditions of Puritan morality and Quaker individualism would later form the backbone of our constitution. A high degree of respect for the individual and a belief that America was a destiny, like Winthrop's 'House on the Hill', were woven into the fabric of America.
The Great Awakening brought religion to the frontier and religion became a dominant part of American politics. Overall, religion was the catalyst for colonization and also the venue for its experimentation. Religion was a major part of the colonist's lives and it shaped their laws and their philosophies. The Great Awakening further instilled the importance of religion in America. America had become a refuge for those who wanted religious freedom and would became a home to the people that wished to practice their religion in an orderly manner without persecution.
Timing and Motivation for the American Revolution
The American Revolution was the last step on a long journey from the split away from England. By the middle of the 1700s, the time had presented a realistic opportunity for self-rule. The Seven Years' War had driven Britain deeply in debt and they were set to collect the payment through taxation of the colonies. The war had also eliminated the French influence in the colonies and the British remained as the only obstacle to self-rule. These events would become the tipping point for a call for independence.
Many of the colonists during this period came under the influence of theorists such as Thomas Paine and John Locke. Locke professed that all men had a contract to each other, not to any authority. Paine argued that to illegally deprive a man of his property was to deny the man his life. The colonists during this period saw themselves as unrepresented in the British parliament. Though they had representation, it was across the ocean and was merely a token representation. The colonists wanted self-rule as a means to reclaim their property and their life.
The colonies, for all practical purposes, were self-governing. They had local law, legislatures, authority to tax, and social infrastructure. England provided little except the regulation of imports and exports. This was in conjunction with what the colonists felt was an unfair and unjust taxation. The enormous debt incurred by England, and their insistence on collecting it from the colonists precipitated the final movement toward independence. The colonies by this time had a de facto government in place and the issue of taxation was the means to move the public into action.
Diversity in the Colonies in 1760
By 1760, the population of the colonies had experienced a tenfold increase over the year 1700. The 2.5 million inhabitants were a mixed group of predominantly Europeans from England, Germany, Scotland, and Ireland. They tended to form own communities and many of them migrated into the south and settled into the backcountry of South Carolina and Georgia. These groups were further divided by religion.
Many people had no religion, but those who did were the majority Protestants. There were also significant numbers of Catholics and some Jews. In New England, residents were required ...Download file to see next pagesRead More
Share:
Tags
Cite this document
(“Religion's Impact on Colonial America Essay Example | Topics and Well Written Essays - 1000 words”, n.d.)
Retrieved from https://studentshare.org/miscellaneous/1531277-religions-impact-on-colonial-america

CHECK THESE SAMPLES OF Religion's Impact on Colonial America

American colonial architecture began during colonial rule in the 17th century. The settlers from various European countries arrived there, dwelled there and brought their own technique of architecture with them. Among them were the British, French, Spanish, Portuguese and German. European architecture became dominating in the Americas. As historians Burkholder and Johnson have pointed out, "in a remarkably short time, the conqueror's cathedrals, convents, administrative buildings, and private residences replaced the pyramids, elevated plazas, ball courts, and palaces of the indigenous elites.” (Mark A. Burkholder and Lyman L. Johnson, 2004) Thus the American architecture can be called amalgamative in its characteristic. But...
22 Pages(5500 words)Assignment

President Andrew Jackson led an example of an administration that set the stage for the way in which James Polk would lead. In 1817, as a still yet military leader, Jackson led the United States into the first of three conflicts with the Seminole Indians from which the acquisition of Florida from Spain would be negotiated and finalized. The situation with Spain was tenuous and should have been dealt with in a diplomatic and cautious manner, but in 1817 President Monroe wrote a letter to General Jackson stating that “Great interests...
8 Pages(2000 words)Article
sponsored ads
Save Your Time for More Important Things
Let us write or edit the essay on your topic "Religion's Impact on Colonial America" with a personal 20% discount.
GRAB THE BEST PAPER

Let us find you another Essay on topic Religion's Impact on Colonial America for FREE!