Comments (0)
Add to wishlistDelete from wishlist
Cite this document
Summary
We must do what we can to encourage corporate responsibility. But we cannot leave companies to regulate themselves globally, any more than we can do in our own national economies." - Jack Straw MP, Secretary of State for Foreign and Commonwealth Affairs, September 2001
…
Download full paperFile format: .doc, available for editing
HIDE THIS PAPERGRAB THE BEST PAPER93.4% of users find it useful 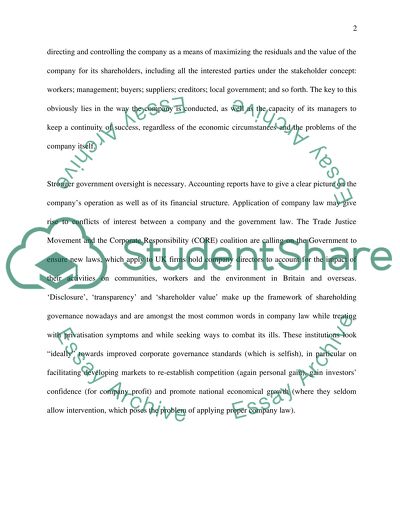 Extract of sample "Privatisation in UK"

Download file to see previous pages Privatisation in the UK has been part of a broader strategy to increase the role of markets in former state industries, to change the means of public control (by substituting arms-length regulation for more direct political control) and to modify incentives to economic efficiency. This process has taken more than fifteen years so far, and will take longer still to come to come to full fruition.
The Government's approach to Company Law Reform has been dominated by a desire to please sections of the business lobby. This has undermined attempts to deliver corporate responsibility. In November 2005, Gordon Brown announced his intention to scrap the Operating and Financial Review (OFR), which would have obliged companies to report on their social and environmental performance. It is thus inevitable to take into consideration the underlying system of national (corporate) laws that regulates this field or that suffers from proper implementation, reform or application. The law is directly related to the performance of management in the process of directing and controlling the company as a means of maximizing the residuals and the value of the company for its shareholders, including all the interested parties under the stakeholder concept: workers; management; buyers; suppliers; creditors; local government; and so forth. The key to this obviously lies in the way the company is conducted, as well as the capacity of its managers to keep a continuity of success, regardless of the economic circumstances and the problems of the company itself.
Stronger government oversight is necessary. Accounting reports have to give a clear picture on the company's operation as well as of its financial structure. Application of company law may give rise to conflicts of interest between a company and the government law. The Trade Justice Movement and the Corporate Responsibility (CORE) coalition are calling on the Government to ensure new laws, which apply to UK firms hold company directors to account for the impact of their activities on communities, workers and the environment in Britain and overseas. 'Disclosure', 'transparency' and 'shareholder value' make up the framework of shareholding governance nowadays and are amongst the most common words in company law while treating with privatisation symptoms and while seeking ways to combat its ills. These institutions look "ideally" towards improved corporate governance standards (which is selfish), in particular on facilitating developing markets to re-establish competition (again personal gain), gain investors' confidence (for company profit) and promote national economical growth (where they seldom allow intervention, which poses the problem of applying proper company law).
Trying to seek easier and cheaper alternatives to counter competition companies are going haywire with their social responsibility that seldom adhere to UK company law even if it exists or find ways to seek loopholes (since they remain unaccountable). Like companies, producing palm oil in the UK is actually obtaining by driving rapid rainforest destruction in South East Asia. Over 500 UK companies have been trading in palm oil, most for more than a decade now without any UK company law to curb them. Yet despite high profile public campaigns about its impacts, virtually none of these companies can prove ...Download file to see next pagesRead More
Share:
Tags
Cite this document
(“Privatisation in UK Essay Example | Topics and Well Written Essays - 1500 words”, n.d.)
Privatisation in UK Essay Example | Topics and Well Written Essays - 1500 words. Retrieved from https://studentshare.org/miscellaneous/1531115-privatisation-in-uk

CHECK THESE SAMPLES OF Privatisation in UK

Prison Privatisation in the UK

...Contract Journal: Prison Sector Spending Section I: 500 words Section II: 2,000 words TABLE OF CONTENTS SECTION I.3 I. Introduction.3 II. Essay Question I...3 SECTION II4 III. Essay Question II.4 IV. Conclusion9 SECTION I. I. Introduction Prison-building in the UK is a large and flourishing business. In January 2000, Prison Privatisation Report International noted that '[the Crime and Disorder Act] could create the need for more prisons. Since all new prisons in England and Wales are to be privately financed, designed, built and run this could allay the private sector's fears about future prison contracts'" ("Prison Privatization," 2000). Here...
10 Pages(2500 words)Essay

Plan of Privatisation in the UK

...﻿Privatisation Introduction Among the most eternal bequeathed of the 1990s one has been the programme of privatisations that the Thatcher government set in train in the foremost half of the decade. Entire portion of the UK economy that were previously part of the public zone were sold to the private sector. Their employees bought some out; the public at large bought others. Some civic services were indentured out to the private sector; others were laid on a more commercial foothold. The UK privatisation plan had a sway on economic policy all over the world. Privatisation plans were set off in Asia, South America, and Africa, as well as in Europe and North America. The most current to try out with privatisations have been the East European...
7 Pages(1750 words)Term Paper

...1. Assess the key macro factors that have influenced the UK grocery retailing industry since the early 1960s. The concept of organisational change is inherently intertwined with external threats and opportunities, which businesses must adapt to as part of strategic planning to continue long term growth. Senior and Fleming argue that the concept of organisational change has many faces, namely “convergent changes and transformational change that is organisation wide and characterised by radical shifts in strategy, mission values and associated changes of structures and systems” (In Thompson & Martin, 2005, p.41). Moreover, Johnson et al highlight that external macro-economic factors intrinsically impact strategy management and without...
13 Pages(3250 words)Assignment
sponsored ads
Save Your Time for More Important Things
Let us write or edit the essay on your topic "Privatisation in UK" with a personal 20% discount.
GRAB THE BEST PAPER

Let us find you another Essay on topic Privatisation in UK for FREE!