Comments (0)
Add to wishlistDelete from wishlist
Cite this document
Summary
Industry background: The construction industry in the UK employs 1.4 million people and contributes 10% of the nation's GDP. (DTI 2006) According to Loosemore (2003) quoted by Anumba et al. the industry combines a number of craft based and professional skills across a range of fairly disparate subsectors…
Download full paperFile format: .doc, available for editing
HIDE THIS PAPERGRAB THE BEST PAPER97.4% of users find it useful 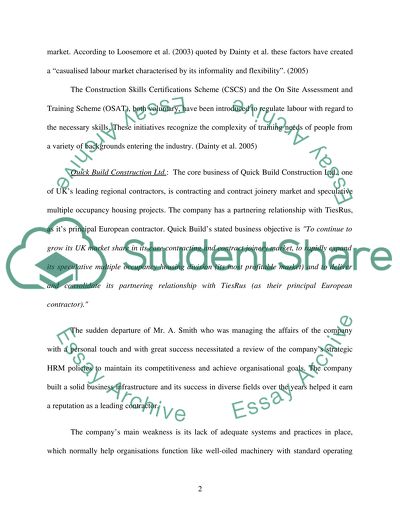 Download file to see previous pages (2003), quoted by Dainty, Mei-I Cheng, et al., is its unpredictability relative to static production industries. This is because the construction project teams that work for varying periods of time during the construction of projects are reconfigured and redeployed to work on other projects. The rapidly changing environments call for a great variety and flexibility of managerial skills. (2005)
While the construction industry is growing it is also facing a severe shortage of skills across the spectrum i.e. crafts, professional and managerial areas, some of which may be attributed to its strong growth over the last decade. Dainty et al. quote Mackenzie et al. (2000) to list out the factors that contribute to it: a demographic decline in the number of people entering the industry; the ever-changing nature of the market leading to a decline of operative skills; the emergence of new technologies which make re-training necessary; increased tendency of people for self-employment and the use of specialist and labour-only sub-contractors; the fragmentation of the industry; and most importantly the decline in training and related resources. (2005) Changes in industrial structure, wastage rates and international competition also impact the market. According to Loosemore et al. (2003) quoted by Dainty et al. ...
(Dainty et al. 2005)
Quick Build Construction Ltd.: The core business of Quick Build Construction Ltd., one of UK's leading regional contractors, is contracting and contract joinery market and speculative multiple occupancy housing projects. The company has a partnering relationship with TiesRus, as it's principal European contractor. Quick Build's stated business objective is "To continue to grow its UK market share in its core contracting and contract joinery market, to rapidly expand its speculative multiple occupancy housing division (its most profitable market) and to deliver and consolidate its partnering relationship with TiesRus (as their principal European contractor)."
The sudden departure of Mr. A. Smith who was managing the affairs of the company with a personal touch and with great success necessitated a review of the company's strategic HRM policies to maintain its competitiveness and achieve organisational goals. The company built a solid business infrastructure and its success in diverse fields over the years helped it earn a reputation as a leading contractor.
The company's main weakness is its lack of adequate systems and practices in place, which normally help organisations function like well-oiled machinery with standard operating procedures to fall back upon in times of crises. The lacunae especially in such areas as resources, training, development and responsiveness to change are greatly felt at the individual, group and organisational levels. The company's current rigid, hierarchical and archaic system of governance is more a hindrance and does not fully utilise the full potential of its human capital. There is an urgent need to instil a team ...Download file to see next pagesRead More
Share:
Tags
Cite this document
(“Human Resource Management: Industry background Essay”, n.d.)
Human Resource Management: Industry background Essay. Retrieved from https://studentshare.org/miscellaneous/1530423-human-resource-management-industry-background

The airline company, which has been chosen to structure this report, is the British Airways. It is one of the world's leading scheduled international passenger and cargo airlines catering to about 300 destinations across the world. ("Annual Report of British Airways", 2008).
According to the International Air Transport Association the airline industry, lost up to $8 billion in the year 2008 which surpassed previously forecasted amount. The marketing environment is constantly changing and with every change the industry gets affected. The demand for airline industry is highly income elastic ("An analysis of British Airways Marketing Environment", 2008). Thus the rise in fuel price last year and the recent economic turmoil has a...
21 Pages(5250 words)Essay

The more surprising aspect is that the service industries like for e.g. hotels depend much more than manufacturing industries on their human capital for the quality of service being delivered by the intangible interface between the staff (the service provider) and the customer.
The reason for this could be that the ‘services sector’ is not homogeneous and includes such diversified industries and services like banking, business services, catering, distribution, finance, insurance, leasing, hotels, and transport etc. In addition to this, it is estimated that sixty-five to seventy-five percent of work in the manufacturing industries also relates to ‘services’.
However, the services...

Let us find you another Essay on topic Human Resource Management: Industry background for FREE!