Iago, when No One is Looking - Essay Example

Comments (0)
Add to wishlistDelete from wishlist
Cite this document
Summary
Shakespeare's 1604 tragedy, Othello, describes the unfortunate tale of a Moor, who despite his race and origin, is reputed in Venice and beyond to be a brave and virtuous man who adheres to all the dictates of manliness in Renaissance society, yet is led to jealousy and murder by his seemingly-honest ancient, Iago…
Download full paperFile format: .doc, available for editing
HIDE THIS PAPERGRAB THE BEST PAPER91.3% of users find it useful 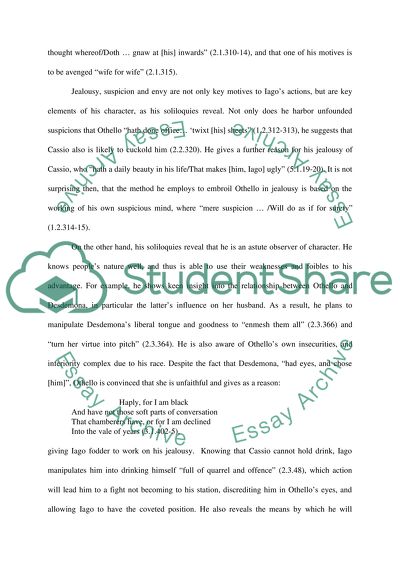 Extract of sample "Iago, when No One is Looking"

Download file to see previous pages Iago's soliloquies and asides, in contrast to his speeches in the presence of other characters, reveals quite clearly his deceitfulness and self-disguise. The audience is not duped for a moment, as, through dramatic irony and our privileged position, we come see that he is engaged in "double-knavery" (1.2.318), and not at all the "honest and true" Iago that others believe him to be. The audience would be amazed at the absolute faith that the character have in Iago's honesty, which we know to be a lie even from his first appearance onstage.
Iago's aim throughout the play is to "blacken" Othello's reputation to match the latter's face, in revenge for what he sees as a slight in Othello's appointing Cassio lieutenant over him. In his first soliloquy in Act I, scene iii, he gives three motives for his plotting: to fatten his purse (1.2.308), "to get [Cassio's] place" as lieutenant (1.2.318), and to make "sport" on Othello whom he hates (1.2.311). He later admits that he is somewhat in love with Desdemona, and reiterates his suspicion that "the lusty Moor/ Hath leap'd into [his] seat; the thought whereof/Doth gnaw at [his] inwards" (2.1.310-14), and that one of his motives is to be avenged "wife for wife" (2.1.315).
Jealousy, susJealousy, suspicion and envy are not only key motives to Iago's actions, but are key elements of his character, as his soliloquies reveal. Not only does he harbor unfounded suspicions that Othello "hath done office 'twixt [his] sheets" (1.2.312-313), he suggests that Cassio also is likely to cuckold him (2.2.320). He gives a further reason for his jealousy of Cassio, who "hath a daily beauty in his life/That makes [him, Iago] ugly" (5.1.19-20). It is not surprising then, that the method he employs to embroil Othello in jealousy is based on the working of his own suspicious mind, where "mere suspicion /Will do as if for surety" (1.2.314-15).
On the other hand, his soliloquies reveal that he is an astute observer of character. He knows people's nature well, and thus is able to use their weaknesses and foibles to his advantage. For example, he shows keen insight into the relationship between Othello and Desdemona, in particular the latter's influence on her husband. As a result, he plans to manipulate Desdemona's liberal tongue and goodness to "enmesh them all" (2.3.366) and "turn her virtue into pitch" (2.3.364). He is also aware of Othello's own insecurities, and inferiority complex due to his race. Despite the fact that Desdemona, "had eyes, and chose [him]", Othello is convinced that she is unfaithful and gives as a reason:
Haply, for I am black
And have not those soft parts of conversation
That chamberers have, or for I am declined
Into the vale of years (3.1.402-5),
giving Iago fodder to work on his jealousy. Knowing that Cassio cannot hold drink, Iago manipulates him into drinking himself "full of quarrel and offence" (2.3.48), which action will lead him to a fight not becoming to his station, discrediting him in Othello's eyes, and allowing Iago to have the coveted position. He also reveals the means by which he will achieve his "monstrous" ends: by insinuating false motives to Cassio, who is handsome, charming, "framed to make women false" (1.2.323). Iago soliloquies further reveal his real thoughts about these ...Download file to see next pagesRead More
Share:
Tags
Cite this document
(“Iago, when No One is Looking Essay Example | Topics and Well Written Essays - 1000 words”, n.d.)
Iago, when No One is Looking Essay Example | Topics and Well Written Essays - 1000 words. Retrieved from https://studentshare.org/miscellaneous/1530336-iago-when-no-one-is-looking

“Iago, When No One Is Looking Essay Example | Topics and Well Written Essays - 1000 Words”, n.d. https://studentshare.org/miscellaneous/1530336-iago-when-no-one-is-looking.
Comments (0)
Click to create a comment or rate a document

CHECK THESE SAMPLES OF Iago, when No One is Looking

Internationalisation Benefits No-One Other than a Few Rich Shareholders

Internationalization is the modern incorporation of the concept of free trade. It is the process whereby trade in goods and services (also involving free capital flow and transfer of technology) is carried on between countries so that there is an ultimate creation of interdependence between the nations of the world. The main aims of Internationalisation are to expand sales, acquire resources like technology and information, and to minimize business risks.   There is a strong notion that Internationalisation benefits only a few rich shareholders and that it does not very much benefit other stakeholders. The notion is controversial, as there are indications that Internationalisation does, in fact, benefit other stakeholders as...
8 Pages(2000 words)Term Paper

Negative Advertisement When It Works

Keeping aside honesty and ethics rich politicians invest huge amount of money to launch election campaign to win the favor of the public. Empirical evidences suggest that this strategy quite often works but by no means can we ignore the negative impact of such campaign. In general, propaganda concerns set of messages aimed at influencing the opinions or behavior of large numbers of people. Instead of impartially providing information, propaganda in its most basic sense presents information in order to influence its audience. The most effective propaganda is often completely truthful, but some propaganda presents facts selectively to encourage a particular synthesis, or gives loaded messages in order to produce an emotional rather...
9 Pages(2250 words)Case Study

... Pla One of History’s Greatest Contributors The dictionary typically defines philosophy as “the love of or search for wisdom or knowledge” or “as the theory or logical analysis of the principles underlying conduct, thought, knowledge and the nature of the universe” (Neufeldt, Goralnik, 1994, p. 1015). With such a general definition, one might begin to understand the complexities involved in studying philosophy as it seems to encompass just about all knowledge pursuits. Perhaps part of the confusion in trying to define the term can be found in the early days of the science when it applied almost universally to all avenues of knowledge in ancient Greece. The term itself derives from an ancient Greek word that translates to “love of wisdom...
12 Pages(3000 words)Case Study

In 1918, William Faulkner attempted to become a pilot for the U.S. Army but was turned down because of his height. He “never stood taller than five feet, six inches tall” (Padgett 1). He never gave up and traveled to Toronto, Canada where he posed as an English national and was admitted to the Royal Canadian Air Force (EGS 2). He then traveled to France with this force, though, when they reached France, the war had ended. (EGS 3)
From 1919 until 1921, after returning to the U.S, William Faulkner attended the University of Mississippi, where he wrote for the school’s newspaper, as well as his hometown’s newspaper. (EGS 3).He also drafted his first play that was presented by the university’s drama...
7 Pages(1750 words)Literature review
sponsored ads
Save Your Time for More Important Things
Let us write or edit the essay on your topic "Iago, when No One is Looking" with a personal 20% discount.
GRAB THE BEST PAPER

Let us find you another Essay on topic Iago, when No One is Looking for FREE!