Comments (0)
Add to wishlistDelete from wishlist
Cite this document
Summary
Don't be misled by the allure of the phrase "freedom of expression"; it is a double-edged sword that can cut either way. Freedom of expression was originally intended to be the "central indisputable element" (Fuller 1) of social life. Used responsibly it can create the harmony that it was meant to, between people of different races and religions…
Download full paperFile format: .doc, available for editing
HIDE THIS PAPERGRAB THE BEST PAPER91.2% of users find it useful 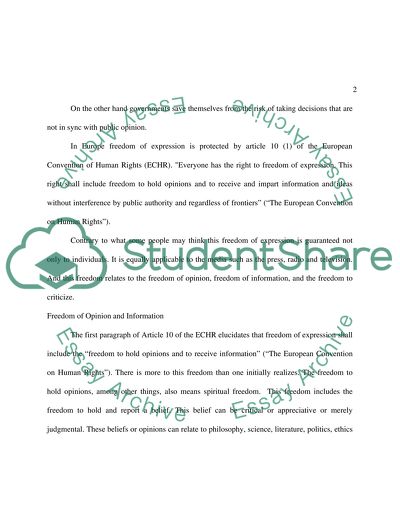 Download file to see previous pages It is an individual's most essential political right and the essence of democracy.
Freedom of expression is what makes it possible for even the most ordinary of citizens to make a political expression, even if that expression is against the state itself. It is this right that makes it possible for such an individual to hold an opinion that is different from the opinion of the majority. It is this freedom that gives people the power to protest inequality and oppression. From this freedom emanate all the other freedoms.
In a democracy, probably the most important consequence of the freedom of expression is to compel governments to the dialogue table, and it is because of this that governments are forced to consider the opinions of people in its decision making. This works to the advantage of both people and the government - if indeed one can make a distinction between the two. People have the advantage of ensuring that all or most governmental decisions consider their opinion.
In Europe freedom of expression is protected by article 10 (1) of the European Convention of Human Rights (ECHR). "Everyone has the right to freedom of expression. This right shall include freedom to hold opinions and to receive and impart information and ideas without interference by public authority and regardless of frontiers" ("The European Convention on Human Rights").
Contrary to what some...
And this freedom relates to the freedom of opinion, freedom of information, and the freedom to criticize.
Freedom of Opinion and Information
The first paragraph of Article 10 of the ECHR elucidates that freedom of expression shall include the "freedom to hold opinions and to receive information" ("The European Convention on Human Rights"). There is more to this freedom than one initially realizes. The freedom to hold opinions, among other things, also means spiritual freedom. This freedom includes the freedom to hold and report a belief. This belief can be critical or appreciative or merely judgmental. These beliefs or opinions can relate to philosophy, science, literature, politics, ethics and several such other aspects. This freedom applies as much to giving an opinion, as to receiving one.
3
Freedom of expression includes the freedom to information. This freedom applies to receiving information, as it does to the dissemination of information. This freedom is an offshoot of the freedom to opinion.
Yet another off-shoot of the freedom to express opinions is the freedom of criticism. This is a significant aspect of the freedom of expression as it gives even people in the minority the right to hold and express views that are not in consonance with the majority.
This Freedom is Not Unconditional
The freedom of expression is however not a platform for unfettered individual and institutional will. There are conditions. The freedoms guaranteed under Article 10 of the ECHR carry with them "certain duties and responsibilities". Exercise of this freedom must be within the parameters of certain procedures, conditions, controls and rules of infraction. These parameters are laid down by law in the wider interests of the ...Download file to see next pagesRead More
Share:
Tags
Cite this document
(“European human rights law Essay Example | Topics and Well Written Essays - 2500 words”, n.d.)
European human rights law Essay Example | Topics and Well Written Essays - 2500 words. Retrieved from https://studentshare.org/miscellaneous/1530089-european-human-rights-law

... to democracy and human rights. The process is lengthy, that involves many steps and procedures. At present three countries,Croatia, Turkey and Macedonia(the former Yugoslav Republic)are vying for membership and their application is under consideration. The procedure is methodical. By establishing relationship with the European Union, the country will send the application for membership to the European Council for evaluation. Unanimous approval of the Council is necessary for the process of further negotiations. The negotiations begins as per the terms and conditions set out in the 1993 Copenhagen agreement. Democracy is the watchword and it demands stable institutions, that are conducive to healthy functioning of democracy, human rights...
9 Pages(2250 words)Case Study

The painting...
7 Pages(1750 words)Coursework
sponsored ads
Save Your Time for More Important Things
Let us write or edit the essay on your topic "European human rights law" with a personal 20% discount.
GRAB THE BEST PAPER

Let us find you another Essay on topic European human rights law for FREE!