Comments (0)
Add to wishlistDelete from wishlist
Cite this document
Summary
In May 2001, Mark Hertsgaard journeyed through fifteen countries for six whole months to interview people from all walks of life on just one topic": the United States of America. He compiled all the anecdotes from his travels to write the controversial book called The Eagle's Shadow: Why America fascinates and infuriates the world In which he illustrates a perception he finds to be all pervasive around the world…
Download full paperFile format: .doc, available for editing
HIDE THIS PAPERGRAB THE BEST PAPER95.2% of users find it useful 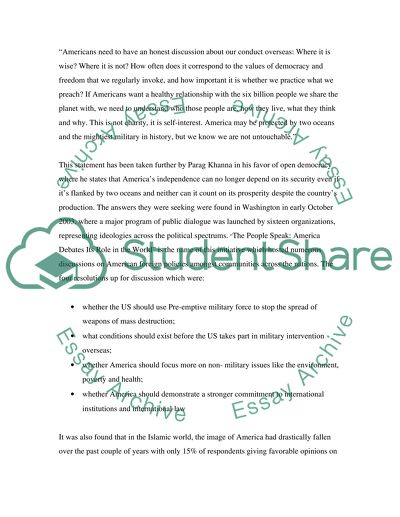 Download file to see previous pages It is a sincere and honest self-examination of the foreign and domestic policies of America.
Amidst the widespread patriotic hysteria and solidarity reawakening post the September 11th, the author braves to tackle the Sovietization of American politics and media, which seek to slander dissent or disagreement of any kind. He brings the present administration under scrutiny as well as exposing the hypocrisy of the so-called "liberal" American press. In his book, the foreigners have complained about the American's domination of a world which is poorly understood by them and who "sanctimoniously boast of democratic virtues while ignoring our complicity in the crimes of authoritarian regimes, and destroy other countries' deep-rooted cultural traditions by exporting our crass culture of self-indulgence and haste."(Bryce Christenson, American Library Association) While feelings of American patriotism and nationalism is at an all time high,Hertgaard brings the reader to the task of self-examining the truth behind those very sentiments. But his weakness lies in the manner he addresses his readers in a tone which is a bit too superior even while elaborating the perceptions of the rest of the world.
"Americans ne
America's foreign policy has been put up for questioning in his book where he writes:
"Americans need to have an honest discussion about our conduct overseas: Where it is wise Where it is not How often does it correspond to the values of democracy and freedom that we regularly invoke, and how important it is whether we practice what we preach If Americans want a healthy relationship with the six billion people we share the planet with, we need to understand who those people are, how they live, what they think and why. This is not charity, it is self-interest. America may be protected by two oceans and the mightiest military in history, but we know we are not untouchable."
This statement has been taken further by Parag Khanna in his favor of open democracy where he states that America's independence can no longer depend on its security even if it's flanked by two oceans and neither can it count on its prosperity despite the country's production. The answers they were seeking were found in Washington in early October 2003, where a major program of public dialogue was launched by sixteen organizations, representing ideologies across the political spectrums. "The People Speak: America Debates Its Role in the World" is the name of this initiative which hosted numerous discussions on American foreign policies amongst communities across the nations. The four resolutions up for discussion which were:
whether the US should use Pre-emptive military force to stop the spread of weapons of mass destruction;
what conditions should exist before the US takes part in military intervention overseas;
whether America should focus more on non- military issues like the environment, poverty and health;
whether America should demonstrate a stronger commitment to international
institutions and international law

CHECK THESE SAMPLES OF American Media

... on collaborating with the Japanese publications to gain a better reach to the manga comics loving US audience. Publication companies like ADV Manga of Houston, Del Rey Manga of New York, VIZ Media of San Francisco, Californiav are some of the most renowned names that have reached a broader arena of comics critics through publication of comics in manga style or popularizing the Japanese manga comics heroes. Collaboration of publishing companies regarding publication of manga comics commenced notably since the year 1986 onwards. Here it is important to mention that impact of these comics was further realized in the North American cities compared to the South, “While the other manga publishers have noted that the manga industry continues...
14 Pages(3500 words)Thesis

...Political communication: Today, voters no longer make decisions based only on personal opinion but view most issues through the eyes and ears of the media. Most options arise from interpretation of the symbols obtained from mass media. Political advertising is a prominent media for reaching voters. Political advertisements aim at increasing issue knowledge, influencing perceptions of the candidate’s character, altering attitudes and affecting candidate preference. In most political advertisements, politicians essentially promote themselves, their thoughts, beliefs, values, image and political propaganda. These advertisements can have a rather persuasive influence on voters. Political ads can convey both positive and negative feelings...
6 Pages(1500 words)Essay

9 Pages(2250 words)Assignment
sponsored ads
Save Your Time for More Important Things
Let us write or edit the essay on your topic "American Media" with a personal 20% discount.
GRAB THE BEST PAPER

Let us find you another Essay on topic American Media for FREE!