Comments (0)
Add to wishlistDelete from wishlist
Cite this document
Summary
Two basic assessment techniques for evaluating student progress are commonly in use. The most established technique is formal assessment with structured testing conducted for a specific purpose and involving the use of commercially-developed and standardized instruments (Rothenbacher & Leconte, 1990)…
Download full paperFile format: .doc, available for editing
HIDE THIS PAPERGRAB THE BEST PAPER92.9% of users find it useful 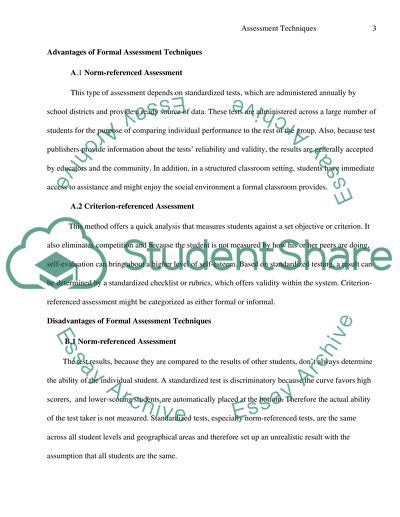 Download file to see previous pages While formal assessment offers accountability in an education system that calls for measured results, informal assessment is a method that can bring about improvement since it gives a student the ability to evaluate self and to see individually how further learning can lead to success.
The two major types of formal assessment are 1) norm-referenced tests and 2) criterion-referenced tests. Both depend on a particular standard, but norm is based on a comparison with other students taking the same test, and criterion-referenced tests measure student ability within a course of study. The student's performance is compared to an established level of achievement for each task or unit of the curriculum (Rothenbacher & Leconte, 1990). The broad definition of curriculum as it relates to this paper is "all the learning planned and guided by the school, whether in groups or individually inside or outside the school" (Kelly, 1983).
This type of assessment depends on standardized tests, which are administered annually by school districts and provide a ready source of data. These tests are administered across a large number of students for the purpose of comparing individual performance to the rest of the group. Also, because test publishers provide information about the tests' reliability and validity, the results are generally accepted by educators and the community. In addition, in a structured classroom setting, students have immediate access to assistance and might enjoy the social environment a formal classroom provides.
A.2 Criterion-referenced Assessment
This method offers a quick analysis that measures students against a set objective or criterion. It also eliminates competition and because the student is not measured by how his or her peers are doing, self-evaluation can bring about a higher level of self-esteem. Based on standardized testing, a result can be determined by a standardized checklist or rubrics, which offers validity within the system. Criterion-referenced assessment might be categorized as either formal or informal.
Disadvantages of Formal Assessment Techniques
B.1 Norm-referenced Assessment
The test results, because they are compared to the results of other students, don't always determine the ability of the individual student. A standardized test is discriminatory because the curve favors high scorers, and lower-scoring students are automatically placed at the bottom. Therefore the actual ability of the test taker is not measured. Standardized tests, especially norm-referenced tests, are the same across all student levels and geographical areas and therefore set up an unrealistic result with the assumption that all students are the same.
B.2 Criterion-referenced Assessment
Although this system offers more areas of evaluation for individual students, the end result is a standard measurement. Educators sometimes base their evaluation of a student's ability on the overall results instead of looking at an individual's response to different units within the curriculum. A set standard, no matter how informal it may seem, is still structured and the ...Download file to see next pagesRead More
Share:
Tags
Cite this document
(“Assessment Techniques for Evaluating Student Progress Essay”, n.d.)
Retrieved from https://studentshare.org/miscellaneous/1529319-assessment-techniques-for-evaluating-student-progress

CHECK THESE SAMPLES OF Assessment Techniques for Evaluating Student Progress

According to Lord Bridge in the ca...
6 Pages(1500 words)Case Study
sponsored ads
Save Your Time for More Important Things
Let us write or edit the essay on your topic "Assessment Techniques for Evaluating Student Progress" with a personal 20% discount.
GRAB THE BEST PAPER

Let us find you another Essay on topic Assessment Techniques for Evaluating Student Progress for FREE!