Comments (0)
Add to wishlistDelete from wishlist
Cite this document
Summary
Change of circumstances have to be convincing, grave and unavoidable for a Court to accept cessation of a contract. Customer changing the address and not informing the other party in Sale contract; customers having a joint credit sale contract, customer being unable to keep up the payments, customers applying for changes like extending the contract or postpone the payment on the basis of unforeseen hardship can credit frustration of contract…
Download full paperFile format: .doc, available for editing
HIDE THIS PAPERGRAB THE BEST PAPER93.8% of users find it useful 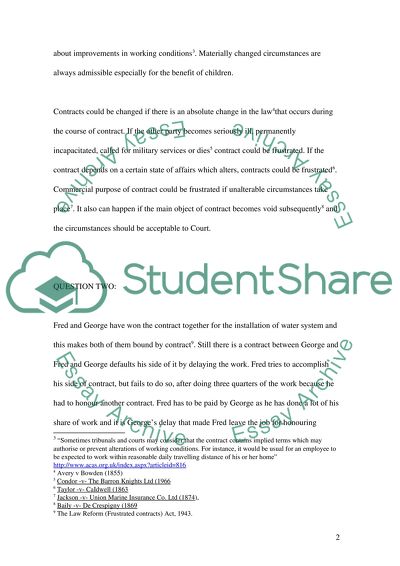 Download file to see previous pages Contract terms of employment could change due to changed economic circumstances, or to bring about improvements in working conditions3. Materially changed circumstances are always admissible especially for the benefit of children.
Contracts could be changed if there is an absolute change in the law4that occurs during the course of contract. If the other party becomes seriously ill, permanently incapacitated, called for military services or dies5 contract could be frustrated. If the contract depends on a certain state of affairs which alters, contracts could be frustrated6. Commercial purpose of contract could be frustrated if unalterable circumstances take place7. It also can happen if the main object of contract becomes void subsequently8 and the circumstances should be acceptable to Court.
Fred and George have won the contract together for the installation of water system and this makes both of them bound by contract9. Still there is a contract between George and Fred and George defaults his side of it by delaying the work. Fred tries to accomplish his side of contract, but fails to do so, after doing three quarters of the work because he had to honour another contract. Fred has to be paid by George as he has done a lot of his share of work and it is George's delay that made Fred leave the job for honouring another contract. Still George and Fred are liable for completing the water system to the third party and here their liability is equal. Fred can claim payment from George for the work he has done. If he could prove that it was George's delay that caused him trouble, he might be able to get damages from George via Court. Still he will be liable to honour the first contract of completing water systems and will be forced to do so10. If water systems claim damages from the two of them for delay, Fred too may have to pay the damages, though he could have a lesser share of it, if he succeeds in proving that George defaulted his contract with him as well as with water systems. Not paying Fred would go against George and will give more strength to Fred's argument and Court might take a lighter view of his abandoning one quarter of the work under changed circumstances of contract which clearly redeems Fred for non-payment and delay by George. This could be taken as self-induced frustration. Fred also will be paid for the contract completed as it could be considered as 'substantially completed' and it entitles for a payment of services and goods, though it will be compared with the work NOT done.
QUESTION THREE:
Presuming that the illness of the parties could be traceable to the sandwiches and fault lies with Harry, his defence will be weak. He might be able to prove that the meat was contaminated not through his fault, but was supplied to him in contaminated state and he was unaware of it, whereby the fault will be divided between the meat supplier and Harry. If he could not prove that and if the contamination is due to his fault (meat supplier might prove that other meat of the same category is not faulty), he will be liable for the sickness caused to the parties. Ian's garden getting neglected might not cause much harm to Harry. John can ...Download file to see next pagesRead More
Share:
Tags
Cite this document
(“CONTRACT LAW ASSIGNMENT 4 Essay Example | Topics and Well Written Essays - 750 words”, n.d.)
CONTRACT LAW ASSIGNMENT 4 Essay Example | Topics and Well Written Essays - 750 words. Retrieved from https://studentshare.org/miscellaneous/1529046-contract-law-assignment-4

... of the contractor, the contract will be terminated. To stop making payment to the contractor To initiate proper initiatives to make sure that the materials and works are safeguarded and kept on the site. Can assign the work to others and can recoup the costs from the original contractor and owner can even recover the cost of any damages or losses due to insolvency. It is to be observed that once the contract is put an end due to insolvency, and if the employer has already paid some advances, and in such event, he will be considered as an unsecured creditor and is only warranted to receive an analogous amount paid to all other unsecured creditors.( www2.biglotteryfund.org.uk). The decision in (“Melville Dundas Ltd (In Receivership”) 6...
13 Pages(3250 words)Essay

Some of the more important rights bestowed upon employees by the employment law are the right to claim wrongful or unfair dismissal and payment for redundancy. Other legislation, such as the health and safety statute and the insolve...
7 Pages(1750 words)Case Study
sponsored ads
Save Your Time for More Important Things
Let us write or edit the essay on your topic "CONTRACT LAW ASSIGNMENT 4" with a personal 20% discount.
GRAB THE BEST PAPER

Let us find you another Essay on topic CONTRACT LAW ASSIGNMENT 4 for FREE!