The World Into Which Christianity Came - Essay Example

Comments (0)
Add to wishlistDelete from wishlist
Cite this document
Summary
Christianity is a collective name applied to societies who believe on the ideas of the existence of Jesus Christ, the Son of God who was sent to save the world from sin by dying on the cross and rising from the dead after three days. These concepts are supported by a known document they call Scriptures, which are composed of the Old Testament - documents before Christ era and the New Testament - compilation of documents from Christ followers after his death, and other non-written accounts they refer to as traditions.
…
Download full paperFile format: .doc, available for editing
HIDE THIS PAPERGRAB THE BEST PAPER94.8% of users find it useful 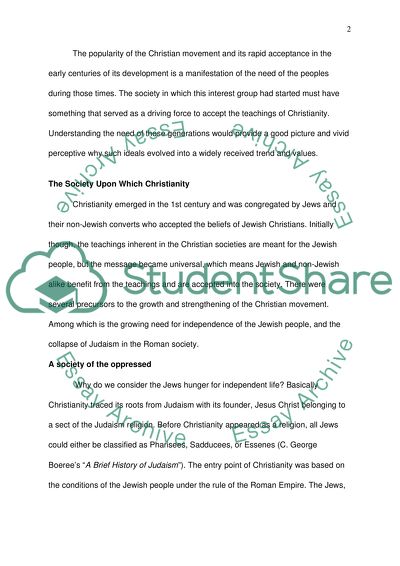 Extract of sample "The World Into Which Christianity Came"

Download file to see previous pages 20, 2007) and about 6 million are considered practicing or doing the mandates of the religion, including attendance to regular mass, doing the sacraments, and participating in missionary works. Although they trace to the same founder, Christians are classified into different congregations each having their own sets of ideals, fundamental beliefs, and practices, which are either solely based on the Scriptures or with tradition. The largest Christian group is the Roman Catholics. Other groups include: The Amish, Baptist churches, Church of England, Church of Jesus Christ of Latter-day Saints, Church of Scotland, Eastern Orthodox Church, Jehovah's Witnesses, Methodist Church, Pentecostalism, Catholic Church, Seventh-day Adventists among others that existed throughout the world.
The popularity of the Christian movement and its rapid acceptance in the early centuries of its development is a manifestation of the need of the peoples during those times. The society in which this interest group had started must have something that served as a driving force to accept the teachings of Christianity. Understanding the need of these generations would provide a good picture and vivid perceptive why such ideals evolved into a widely received trend and values.
The Society Upon Which Christianity
Christianity emerged in the 1st century and was congregated by Jews and their non-Jewish converts who accepted the beliefs of Jewish Christians. Initially though, the teachings inherent in the Christian societies are meant for the Jewish people, but the message became universal, which means Jewish and non-Jewish alike benefit from the teachings and are accepted into the society. There were several precursors to the growth and strengthening of the Christian movement. Among which is the growing need for independence of the Jewish people, and the collapse of Judaism in the Roman society.
A society of the oppressed
Why do we consider the Jews hunger for independent life Basically Christianity traced its roots from Judaism with its founder, Jesus Christ belonging to a sect of the Judaism religion. Before Christianity appeared as a religion, all Jews could either be classified as Pharisees, Sadducees, or Essenes (C. George Boeree's "A Brief History of Judaism"). The entry point of Christianity was based on the conditions of the Jewish people under the rule of the Roman Empire. The Jews, claiming to be God's people had been in bondage for a long time and was very desperate for freedom. About a hundred years before Jesus was born, the Romans granted them control over their kingdom but internal divisions weakened the Jewish kingdom that prompted the Romans to take control over once again in 63 BCE (BBC Team's "History of Judaism").
Oppression were felt by the lowly Jewish not only from the Romans but also from other Jewish who ruled them under Roman controls. The priests or Sadducees were allied to the rulers and lost favor with the people, who turned increasingly to the Pharisees or Scribes, from whose group Rabbis or teachers arose. Jesus was considered one among those messianic teachers who emerged from the oppressed Jewish society.
Under the circumstances of the Jewish race, the people ...Download file to see next pagesRead More
Share:
Tags
Cite this document
(“The World Into Which Christianity Came Essay Example | Topics and Well Written Essays - 2000 words”, n.d.)
The World Into Which Christianity Came Essay Example | Topics and Well Written Essays - 2000 words. Retrieved from https://studentshare.org/miscellaneous/1528974-the-world-into-which-christianity-came

“The World Into Which Christianity Came Essay Example | Topics and Well Written Essays - 2000 Words”, n.d. https://studentshare.org/miscellaneous/1528974-the-world-into-which-christianity-came.
Comments (0)
Click to create a comment or rate a document

CHECK THESE SAMPLES OF The World Into Which Christianity Came

On the other hand, these globalization standards are opposed by some critics and argue that globalization does not have to be a requirement for putting up a business in other countries, thus it is just a choice for entering a foreign market. Accordingly, standardization is applicable specifically to high-end markets and with accord to the market segmentation such as the trends that the young people patronize (Mullman, 2006) Regardless of the idea that globalization is mostly based on how the company standardizes the products, the home country still holds the profitability of the business as the economy affects how the foreign investors and other national sources back up the business (Stiglitz, 2006).
Maintaining a cluster in...
9 Pages(2250 words)Assignment

... A Brave New World 26 February Introduction Man has always wondered since time immemorial about his ultimate place in the big universe. He had attempted to find meaning in this scheme of things without much success. A key repeated theme is seeming failure to find that true meaning that will justify his existence. What usually happens is that the more Man goes deeper into the search for ultimate meaning, the more he finds nothing. This is confounding, to say the least, and goes to show how useless the search could be. Many people had been doing this search several times and came up with nothing. Out of this seeming hopelessness and uselessness came the philosophical idea of the absurd – that Mans search for individual meaning is bound...
8 Pages(2000 words)Term Paper
sponsored ads
Save Your Time for More Important Things
Let us write or edit the essay on your topic "The World Into Which Christianity Came" with a personal 20% discount.
GRAB THE BEST PAPER

Let us find you another Essay on topic The World Into Which Christianity Came for FREE!