Comments (0)
Add to wishlistDelete from wishlist
Cite this document
Summary
Toys and games is a business that is appreciated by everyone for its ground-breaking products. This industry is always innovative in its methods of marketing and makes use of opportunities by bringing out various products and technologies that are exhibited through different events like the trade shows, fair, epos etc…
Download full paperFile format: .doc, available for editing
HIDE THIS PAPERGRAB THE BEST PAPER97.9% of users find it useful 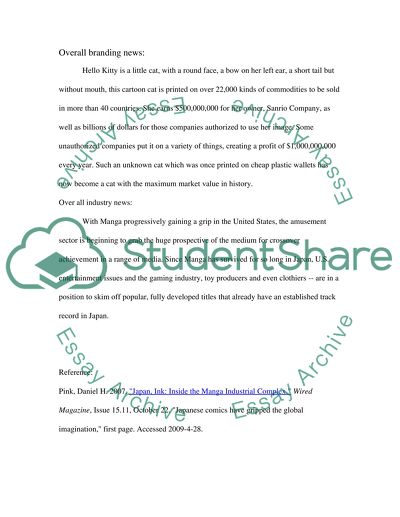 About the industry: Toys and games is a business that is appreciated by everyone for its ground-breaking products. This industry is always innovativein its methods of marketing and makes use of opportunities by bringing out various products and technologies that are exhibited through different events like the trade shows, fair, epos etc. Besides displaying a similar business of the same industry can easily get to know about the participants, promoters and organizers. These details can easily help new entrants to plan for new business deals.
Market analysis:
The authority of manga on international cartooning has developed significantly in the last two decades. Manga were brought out only slowly into U.S. markets, first in association with anime and then independently. As on December 2007[update], a minimum of 15 U.S. manga publishers have released 1300 to 1400 titles
The sway of manga on European cartooning is rather different than U.S. experience. Manga was open to the European market during the 1970s when Italy and France broadcast anime. According to the Japan External Trade Organization, sales of manga touched $212.6 million within France and Germany alone in the year 2006.
Times are tough across the globe. With the economic slowdown, many industries are badly hurt. Anime/manga sales have already been slumping in the local as well as the international market. If the favorite entertainment segment has to survive these hard times, then products have to be bought not only for ourself but for our near and dear ones.
Overall branding news:
Hello Kitty is a little cat, with a round face, a bow on her left ear, a short tail but without mouth, this cartoon cat is printed on over 22,000 kinds of commodities to be sold in more than 40 countries. She earns $500,000,000 for her owner, Sanrio Company, as well as billions of dollars for those companies authorized to use her image. Some unauthorized companies put it on a variety of things, creating a profit of $1,000,000,000 every year. Such an unknown cat which was once printed on cheap plastic wallets has now become a cat with the maximum market value in history.
Over all industry news:
With Manga progressively gaining a grip in the United States, the amusement sector is beginning to grab the huge prospective of the medium for crossover achievement in a range of media. Since Manga has survived for so long in Japan, U.S. entertainment issues and the gaming industry, toy producers and even clothiers -- are in a position to skim off popular, fully developed titles that already have an established track record in Japan.
Reference:
Pink, Daniel H. 2007. "Japan, Ink: Inside the Manga Industrial Complex." Wired Magazine, Issue 15.11, October 22. "Japanese comics have gripped the global imagination," first page. Accessed 2009-4-28. Read More
Share:
Tags
Cite this document
(“Manga in United States Essay Example | Topics and Well Written Essays - 500 words”, n.d.)
Manga in United States Essay Example | Topics and Well Written Essays - 500 words. Retrieved from https://studentshare.org/miscellaneous/1528860-manga-in-united-states

CHECK THESE SAMPLES OF Manga in United States

... in love and dealing with the challenges of everyday life. Thats not to say that Manga doesnt have its share of warriors and blade-wielding superheroes.”xv In the US media sector also Japanese manga is gradually becoming a major source for attracting mass attention. Use of manga “as one of the best ways to reach mass audience and shape their opinions” has long been adopted in the Japanese context and in that country manga has already received “nearly the same social status as novels and films.”xvi The situation may not be pervasive in the United States, but it is quite explicit that quite soon manga style will determine the orientation of teenage lifestyle. Pondering over the way manga has been fused into American cultural outlook...
14 Pages(3500 words)Thesis

For example, for farming communities, fertile and well-watered land has been a pull factor in migration. Business opportunities and political stability are also examples of pull factors.
Since the turn of the 20th century, Great Britain and Northern Ireland have experienced a great influx of foreigners migrating into the country due to pull or push factors. There have been different waves of migrations to the United Kingdom, which has had different impacts. Because of this, the United Kingdom has had to respond in several ways, which includes coming up with new acts on immigration, nationality, and providing asylum to refugees.1 However, the topic of migration to the United Kingdom has attracted different political views and...
23 Pages(5750 words)Assignment
sponsored ads
Save Your Time for More Important Things
Let us write or edit the essay on your topic "Manga in United States" with a personal 20% discount.
GRAB THE BEST PAPER

Let us find you another Essay on topic Manga in United States for FREE!