Comments (0)
Add to wishlistDelete from wishlist
Cite this document
Summary
Setting up a business or starting a new project in a new country always need extensive research and analysis. Every country has its own business environment and is attractive to some type of businesses. As a human resource manager it is important to consider all the aspects related to the department before starting up any new business of project (Bhatia & Dey, pg 1, 2005).
…
Download full paperFile format: .doc, available for editing
HIDE THIS PAPERGRAB THE BEST PAPER97.7% of users find it useful 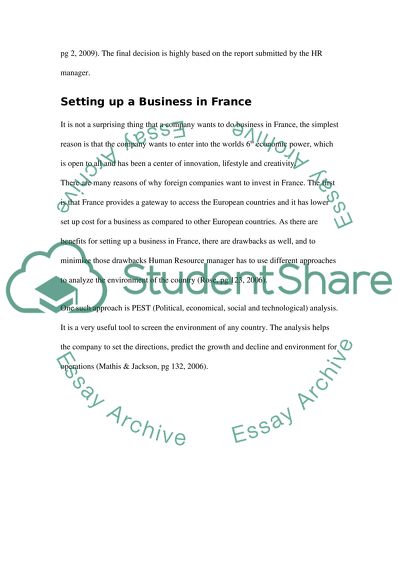 Download file to see previous pages Managers must screen the external environment before entering the market.
If these factors are neglected before going to the country, organization may end up in loosing huge amount of money and resources (Human Resource Management, pg 1, 2008). That is why HR managers should consider all the aspects very carefully as the availability of the required labor force also depend upon these factors.
Other than that a company has to answer the question that why they want to go to that country, who will be the workers, what will be the structure, from where will the finances come and what are the legal requirements to consider. As a HR manager ones job is to find out about the labor force availability and the legal requirements. Both the areas are the most important areas for the company to enter in a new country, as workers are the one who are responsible for running the business, where as legal laws keeps a check on your activities and business (Globalization and Environment, pg 2, 2009). The final decision is highly based on the report submitted by the HR manager.
It is not a surprising thing that a company wants to do business in France, the simplest reason is that the company wants to enter into the worlds 6th economic power, which is open to all and has been a center of innovation, lifestyle and creativity.
There are many reason...
As there are benefits for setting up a business in France, there are drawbacks as well, and to minimize those drawbacks Human Resource manager has to use different approaches to analyze the environment of the country (Rose, pg 123, 2006).
One such approach is PEST (Political, economical, social and technological) analysis. It is a very useful tool to screen the environment of any country. The analysis helps the company to set the directions, predict the growth and decline and environment for operations (Mathis & Jackson, pg 132, 2006).
PEST Analysis of France
Political environment:
The political environment is stable in the country for the new investors from abroad. Government has formed policies to support such business and at the same time safeguarding the interest of the employees by giving flexible working hours and good retirement packages. There is no political uncertainty in the country, thus it is safe to invest as far as political factors are concerned (Mathis & Jackson, pg 110, 2006).
Environmental conditions:
80% of the countries electricity is generated through nuclear plants, where are the main source of increase in temperature, where as, being the industrial country it is now facing environmental challenges. Thus any new business will have to deal with new environmental policies in order to set up the business (Daft, pg 123, 2001).
Social environment:
France is one of the most liberal countries in the world, but still face some social issues such as the diversity of among its residents and their life style conflicts. There is a huge % of child born with out a married couple and increase ...Download file to see next pagesRead More
Share:
Tags
Cite this document
(“Human Resource Issues in Setting up Projects in France Essay”, n.d.)
Human Resource Issues in Setting up Projects in France Essay. Retrieved from https://studentshare.org/miscellaneous/1528402-human-resource-issues-in-setting-up-projects-in-france

“Human Resource Issues in Setting up Projects in France Essay”, n.d. https://studentshare.org/miscellaneous/1528402-human-resource-issues-in-setting-up-projects-in-france.
Comments (0)
Click to create a comment or rate a document

This work arrived at conclusions, by establishing the binding nature of the UDHR on the member states. The UDHR was rendered binding...

The Resource-Based View of the firm, however, as Begermann (2006) indicates, pertains to two fundamental constructs other than the strategic management; the building of competencies and the sustainability of capabilities. However, prior to exploring these constructs, there needs to be a more thorough analysis of the RBV’s main points regarding t...

This report will aim at critically evaluating the role of human networks in knowledge creation and knowledge sharing within Patni Computer Systems Ltd. (Patni). For this purpose, an extensive literature review will be undertaken and various theories pertaining to human resource management will be made use of....

The painting...
7 Pages(1750 words)Coursework
sponsored ads
Save Your Time for More Important Things
Let us write or edit the essay on your topic "Human Resource Issues in Setting up Projects in France" with a personal 20% discount.
GRAB THE BEST PAPER

Let us find you another Essay on topic Human Resource Issues in Setting up Projects in France for FREE!