Comments (0)
Add to wishlistDelete from wishlist
Cite this document
Summary
The main topic of Anna Morgan's (2006) article published on The Washington Post is about the conflictive relationship between Canada and the United States regarding the war on terrorism. While Canada's politicians and public in general are not really worried about the real threats of terrorism against the United States, it is obvious that Canada is a strategic place for any possible future terrorist attacks as it has been evidenced lately before and after 9/11…
Download full paperFile format: .doc, available for editing
HIDE THIS PAPERGRAB THE BEST PAPER92.1% of users find it useful 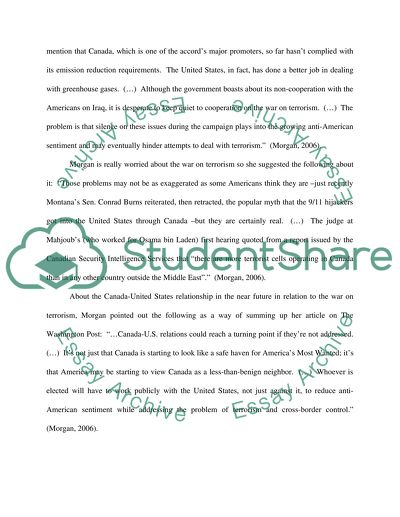 Extract of sample "War on terrorism"

War On Terrorism The main topic of Anna Morgan's (2006) article published on The Washington Post is about the conflictive relationship between Canada and the United States regarding the war on terrorism. While Canada's politicians and public in general are not really worried about the real threats of terrorism against the United States, it is obvious that Canada is a strategic place for any possible future terrorist attacks as it has been evidenced lately before and after 9/11. These facts are explained clearly by Morgan in a very well-written journalistic piece. Canadian politicians keep pointing their fingers at the United States and that way we can lose focus on the reality of terrorism coming directly out of Canada's borders into the homeland of the United States of America.
Morgan speaks about Canadian politicians in the following terms: "they've been using that familiar demon -the United States and all its evils- as the fuel to heat Canadian voters to a frenzy. () And all the while, they're studiously ignoring Canada's own homegrown issues."
Morgan stated the following about Canadians in general: "There's no denying that Canadians are in an even more anti-American mood than usual, thanks to the Iraq war and the Bush administration's perceived arrogance. () Politicians here know that Canadians love to read, talk and debate about U. S. transgressions. Newspaper articles point to ethnic profiling at airports and long border waits as evidence that the war on terrorism is a sham, and that Americans are simply looking for excuses to harass Canadians for the country's multicultural society." (Morgan, 2006).
Morgan pointed out the following about Canada's Prime Minister Paul Martin, the NAFTA's accord, and the Canadian government: "he (Martin) conveniently neglected to mention that Canada, which is one of the accord's major promoters, so far hasn't complied with its emission reduction requirements. The United States, in fact, has done a better job in dealing with greenhouse gases. () Although the government boasts about its non-cooperation with the Americans on Iraq, it is desperate to keep quiet to cooperation on the war on terrorism. () The problem is that silence on these issues during the campaign plays into the growing anti-American sentiment and may eventually hinder attempts to deal with terrorism." (Morgan, 2006).
Morgan is really worried about the war on terrorism so she suggested the following about it: "Those problems may not be as exaggerated as some Americans think they are -just recently Montana's Sen. Conrad Burns reiterated, then retracted, the popular myth that the 9/11 hijackers got into the United States through Canada -but they are certainly real. () The judge at Mahjoub's (who worked for Osama bin Laden) first hearing quoted from a report issued by the Canadian Security Intelligence Services that "there are more terrorist cells operating in Canada than in any other country outside the Middle East"." (Morgan, 2006).
About the Canada-United States relationship in the near future in relation to the war on terrorism, Morgan pointed out the following as a way of summing up her article on The Washington Post: "Canada-U.S. relations could reach a turning point if they're not addressed. () It's not just that Canada is starting to look like a safe haven for America's Most Wanted; it's that America may be starting to view Canada as a less-than-benign neighbor. () Whoever is elected will have to work publicly with the United States, not just against it, to reduce anti-American sentiment while addressing the problem of terrorism and cross-border control." (Morgan, 2006).
The limited subject of Morgan's article is the following: Canadians' politicians and public in general and their indifferent position against the war on terrorism, which is really a threat to the United States.
Morgan's thesis is the following: Canadians are taking an indifferent position against the war on terrorism while this is a real and very serious threat against the United States.
My thesis statement for the essay is as follows: Due to its strategic position Canada can be used for terrorist activities against the United States, but in spite of this fact Canadians' politicians and common citizens remain indifferent on the war on terrorism as an expression of their anti-American sentiment.
This article portrays eloquently how Canada is not taking seriously the war on terrorism as it is obvious that their anti-American sentiment is playing its part in fueling up their quiet indifference. My opinion is in favor of the United States and against terrorism in any form. I really think that Canadians have to face the reality of terrorism against their closest neighbors, the United States. They should put aside their anti-American sentiment and help the United States on their war on terrorism.
Works Cited
Morgan, Anna. "Northern Ire; Canadian Politics Are All About America". (8 January, 2006). In The Washington Post. p. B.02. Washington, D. C. 26 January 2006. http://proquest.umi.com/pqdwebdid=959422591&sid=1&Fmt=3&clientld=25238&VName=PQD Read More
Share:
Tags
Cite this document
(“War on terrorism Essay Example | Topics and Well Written Essays - 500 words”, n.d.)
War on terrorism Essay Example | Topics and Well Written Essays - 500 words. Retrieved from https://studentshare.org/miscellaneous/1525543-war-on-terrorism

CHECK THESE SAMPLES OF War on terrorism

...?argumentative essay on global war on terrorism The war on terrorism is a campaign launched against Al-Qaeda and other terrorist organizations with the objective of defeating them.It is led by the United States and the United Kingdom with the support of other NATO and non-NATO countries.It officially started after the 9/11 attacks on the US soil although earlier attacks on US embassies in Kenya, Tanzania and the attempted bombing of the Los Angeles international airport were alarming.The then president, George Bush took the initiative and claimed to fight the war on terrorism on behalf of the whole world.Following the invasions of Afghanistan in 2001 and then targetting Iraq in 2003,NATO forces have been involved in all operations... the...
5 Pages(1250 words)Assignment

...What are the legal consequences of such warrants, indictments, and investigations on the war on terrorism and related international conventions and practices The sp-called "war on terrorism" has raised new questions as to the extent to which countries must adhere to their treaty agreements, convention signings and general principles of lawful practice. A number of countries, including the United States, have claimed the right to essentially rewrite their treaty obligations and even their own laws under, in the case of the US, the guise of "executive authority" in time of war. As the case in Italy illustrates, limits both should be and are being placed on...
8 Pages(2000 words)Essay

...War on terrorism On September 12, 2001, less than 24 hours after the terrorist attacks in New York and Washington, NATO invoked Article 5 of the North Atlantic Treaty and declared the attacks to be an attack against all 19 NATO member countries. In the following months, NATO took a wide range of measures to respond to the threat of terrorism. On November 22, 2002, the member states of the EAPC decided on a Partnership Action Plan against Terrorism which explicitly states that "EAPC States are committed to the protection and promotion of fundamental freedoms and human rights, as well as the rule of law, in combating terrorism". The invasion of Afghanistan is seen as the first action of this war, and initially involved forces... to...
4 Pages(1000 words)Research Paper

War on Terrorism under the Bush administration

...War on Terrorism Question The three foreign policy goals of political and economic freedom, peaceful inter relations, and respect for human dignity have not been realized under the Bush administration. Our political freedom has been hampered by the politics of fear and the ability of both parties to exploit the issue of terrorism for their own political gain. The economic cost of the war has necessitated that the US postpone and cancel the implementation of needed social programs such as health care and social security reform. Rather than giving the citizens greater freedom, the war on terror has enslaved the populous. The...
2 Pages(500 words)Essay

...Order#124776 May 13, 2006 The War on Terrorism The terrorist attacks of September 11, 2001 changed the way the U.S. government dealt with security almost overnight. A few days later U.S. president, George W. Bush, declared that the U.S. would use whatever force necessary against those connected with the bombings. Since the war on terrorism was launched, the U.S. has taken lengthy measures both at home and abroad to find and apprehend anyone who might be a terrorist. The government has also increased Homeland Security by using surveillance techniques that were previously considered an invasion of privacy. President Bush’s war on terrorism...
6 Pages(1500 words)Essay

War on Drugs and War on Terrorism

Ethics and the War on Terrorism

...Ethics and the War on Terrorism: justifying torture in the war against terrorism Following the September-Eleventh attacks on the United States, lively debates on the support of torture interrogation of terrorists emerged within the public forums. These arguments base largely on the “ticking bomb” scenario. Although these virtue ethics provide incisive arguments from both supporting and opposing sides of torture, they remain subject to further practical evaluations. The utilitarian arguments alongside other ethical and logical perspectives form the basis of these arguments on the subject of torture in terror. This essay discusses the issue of torture in...
8 Pages(2000 words)Research Paper

...﻿War on Terrosism War on terrorism is nothing but the waste of lives and resources, all for the personal interest of the countries involved in this war, like the United States of America. It is a war which started after September 11, 2001 and has not ended since then. Due to this war, many children have lost their fathers, many Afghanis and Iraqis have lost their men and the right to be free in their country (Lansford, Watson & Covarrubias, 2009). The war on terrorism has done more bad than good for the world, as because of the aggression of the USA, an extremist group of people, who call themselves...
1 Pages(250 words)Coursework
sponsored ads
Save Your Time for More Important Things
Let us write or edit the essay on your topic "War on terrorism" with a personal 20% discount.
GRAB THE BEST PAPER

Let us find you another Essay on topic War on terrorism for FREE!