Stem Cell Legislation in the US - Essay Example

Comments (0)
Add to wishlistDelete from wishlist
Cite this document
Summary
Research using stem cells is a very promising area for assessing possibilities of developing newer cell replacement therapies. A stem cell is defined by its ability of self-renewal and its totipotency. This article covers the history, current status and comparison of US legislation on stem cells with the rest of the world.
…
Download full paperFile format: .doc, available for editing
HIDE THIS PAPERGRAB THE BEST PAPER92.4% of users find it useful 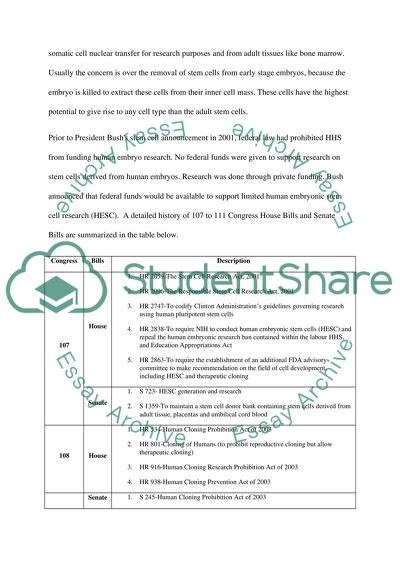 Extract of sample "Stem Cell Legislation in the US"

Download file to see previous pages Since 1998, when the scientists in University of Wisconsin isolated cells for the first time from the inner cell mass of the early human embryo, called the blastocyst, and developed the first human embryonic stem cell lines, an enhanced research is being done to understand therapeutic potential of stem cells. Moreover, the interest of scientists is increasing in regenerative medicines so that the stem cell therapy can be brought to clinics. Research efforts have focused on spinal cord injury, multiple sclerosis, Parkinson's disease, Alzheimer's disease, diabetes, and other diseases or conditions. Scientists hope to use specialized cells to replace dysfunctional cells in the brain, spinal cord, pancreas, and other organs. The stem cells are obtained from 2-8 days old embryo created by in vitro fertilization (IVF), 5-9 weeks old foetuses aborted by elective abortion, embryos created by IVF or somatic cell nuclear transfer for research purposes and from adult tissues like bone marrow. Usually the concern is over the removal of stem cells from early stage embryos, because the embryo is killed to extract these cells from their inner cell mass. These cells have the highest potential to give rise to any cell type than the adult stem cells.
Prior to President Bush's stem cell announcement in 2001, federal law had prohibited HHS from funding human embryo research. No federal funds were given to support research on stem cells derived from human embryos. Research was done through private funding. Bush announced that federal funds would be available to support limited human embryonic stem cell research (HESC). A detailed history of 107 to 111 Congress House Bills and Senate Bills are summarized in the table below.
Congress
Bills
Description
107
House
1. HR 2059-The Stem Cell Research Act, 2001
2. HR 2096-The Responsible Stem Cell Research Act, 2001
3. HR 2747-To codify Clinton Administration's guidelines governing research using human pluripotent stem cells
4. HR 2838-To require NIH to conduct human embryonic stem cells (HESC) and repeal the human embryonic research ban contained within the labour HHS, and Education Appropriations Act
5. HR 2863-To require the establishment of an additional FDA advisory committee to make recommendation on the field of cell development, including HESC and therapeutic cloning
Senate
1. S 723- HESC generation and research
2. S 1359-To maintain a stem cell donor bank containing stem cells derived from adult tissue, placentas and umbilical cord blood
108
House
1. HR 534-Human Cloning Prohibition Act of 2003
2. HR 801-Cloning of Humans (to prohibit reproductive cloning but allow therapeutic cloning)
3. HR 916-Human Cloning Research Prohibition Act of 2003
4. HR 938-Human Cloning Prevention Act of 2003
Senate
1. S 245-Human Cloning Prohibition Act of 2003
2. S 303-Human cloning ban and Stem Cell Research Protection Act of 2003
109
House
1. HR 162-Use of Federal Fund to Research an HESC
2. HR 222-Prohibition of Federal Funding for Research on the Cloning of Humans
3. HR 810-The Stem Cell Research Enhancement Act of 2005
4. HR 1357-The Human Cloning Prohibition Act of 2005
Senate
1. S 471- Stem Cell Research ...Download file to see next pagesRead More
Share:
Tags
Cite this document
(“Stem Cell Legislation in the US Essay Example | Topics and Well Written Essays - 1250 words”, n.d.)
Retrieved from https://studentshare.org/miscellaneous/1525174-stem-cell-legislation-in-the-us

“Stem Cell Legislation in the US Essay Example | Topics and Well Written Essays - 1250 Words”, n.d. https://studentshare.org/miscellaneous/1525174-stem-cell-legislation-in-the-us.
Comments (0)
Click to create a comment or rate a document

CHECK THESE SAMPLES OF Stem Cell Legislation in the US

...is capable or justified to terminate another’s life. For the same reason, McLaren (2001) insists that destruction of blastocysts created from artificially fertilized gametes in the laboratory is immoral, hence, unacceptable. Additionally, antagonists of the stem cells research hold that in some cases the human embryonic stem cell therapy has led to increased growth of tumors and cancer cells on bodies of individual patients. Significant to note is the danger attributed to the possibilities of scientists who may take advantage of the legislations accrediting stem cells research in practicing human...
6 Pages(1500 words)Research Paper

...and rejuvenating mechanism, stem cells have the ability to “divide endlessly and replenish other cells of the living person, and their product could either maintain a form of a stem cell or become another functional cell in the form of a muscle, brain or red blood cell” (National Institutes of Health, 2010). Some scientists, in fact, see the stem cell as the 'bright future of medicine' and the 'source of the elixir of life.' In treating diseases, stem cells can also be used to generate new genes from the damaged ones to give them healing...
6 Pages(1500 words)Term Paper

...?Stem Cell Research Legislation Introduction Stem cell research and its applications are one of the most controversial topics and practices in the health care delivery system. It has gained much controversy because of its ethical and physiological implications which have polarized people’s position and opinion on its use and application. Advocates for stem cell research highlight its benefits and they support the laws which have been suggested in its favor. Others are however not highly enthusiastic about its application within the current health system. As a result, many laws and versions of...
6 Pages(1500 words)Research Paper

..., which encourage the progress of research activities in this field (Schechter, 2010). Meanwhile, some other countries such as the USA tightened their legislations to oppose the research, a stand that has loosened with time. Under this topic, the paper will mainly focus on USA, a country that has undergone a series of changes in legislations governing human embryonic stem cell research. In the year 1996, the Congress passed a bill called Dickey Amendment, which prohibited the DHHS and the NIH from funding any activity that involves creation or destruction of human embryo for the purpose of research. However, the Bill did not restrict the use of private...
5 Pages(1250 words)Research Paper

...for research purposes. Two years later, in 1996, there was a legislative ban on NIH’s spending on stem cell research from human embryos. Thereafter, every year, the government passed such a ban. As Wertz (2002, p. 674-678) points out, according to the ban, federal funds could not be used for the development of human embryos for research purposes where human embryo is destroyed, discarded, or knowingly subjected to risk of injury or death. However, as the Wisconsin scientists successfully grew embryonic stem cells into specialized cells, there arose increased demand from NIH to again look into the governmental ban on...
5 Pages(1250 words)Research Paper

...? Legislation on Human Stem Cell Research Introduction There is a continued debate on the use of stem cells for the treatment of terminal illness. This has been a controversial subject due to the ethical, political and religious issues surrounding this subject. Stem cells are biological cells that have the ability to form new cells. Stem cells can differentiate into diverse, specialized cell types. These cells have been in the treatment of cancer, immunodeficiency diseases and other autoimmune diseases...
6 Pages(1500 words)Research Paper

...potential information for the benefit of the Americans, was hoping from the start to receive financial support from the government, and consensus votes among the legislators in both Congress and Senate (US Congress, 2010, p.9967). However, the Congressional Bill, Stem Cell Research Enhancement Act, vetoed by Bush administration, was highlighting scientific progress which would be under constraint through living up to ethical responsibilities (Rimmer, 2008, p.258). Under this point, stem cell research has difficulty finding funding support from the Federal Government, which leads to varying scrutiny from the point of view of the...
5 Pages(1250 words)Essay

Let us find you another Essay on topic Stem Cell Legislation in the US for FREE!