The Negro Speaks of Rivers by (Langston Hughes) - Essay Example

Comments (0)
Add to wishlistDelete from wishlist
Cite this document
Summary
In this poem, 'The Negro Speaks of Rivers', the poet, Langston Hughes uses a voice that speaks for all people of his race, defining the history, heritage and civilization of all Black people of African origin or descent. He takes the four great rivers that have long been connected to the development of human civilization and links them to the African American, or Negro experience…
Download full paperFile format: .doc, available for editing
HIDE THIS PAPERGRAB THE BEST PAPER95.8% of users find it useful 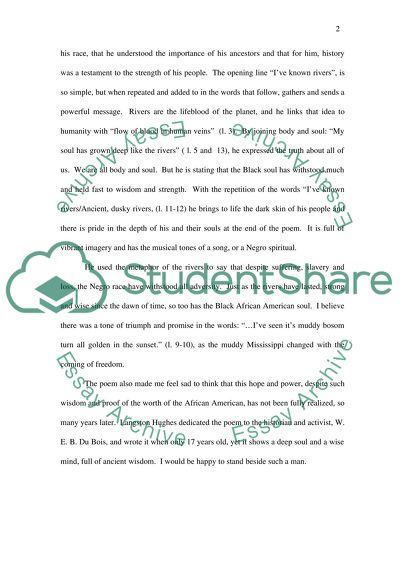 Extract of sample "The Negro Speaks of Rivers by (Langston Hughes)"

Marquita L. Franklin Maryniak English 1102 December 2007 Analysis of 'The Negro Speaks of Rivers' by Langston Hughes, 1921 In this poem, 'The Negro Speaks of Rivers', the poet, Langston Hughes uses a voice that speaks for all people of his race, defining the history, heritage and civilization of all Black people of African origin or descent. He takes the four great rivers that have long been connected to the development of human civilization and links them to the African American, or Negro experience. In order to show this, he takes us back in time, with this powerful metaphorical poem, and forward to the more recent days of slavery and abolition. The second to fourth lines declare his intent and his feelings, with a wise and majestic tone
"I've known rivers ancient as the world and older than the
flow of human blood in human veins.
My soul has grown deep like the rivers." (l. 2-4)
So he begins to tell of his people's history, and how much they contributed, suffered and survived. The 'I' who "bathed in the Euphrates when dawns were young" (l. 5), who
"built my hut near the Congo", (l. 6), who "looked upon the Nile and raised the
pyramids above it" (l. 7) and who "heard the singing of the Mississippi when Abe Lincoln went down to New Orleans," (l. 8) represents all Black people. Their presence and contributions to the development of civilization is ancient and timeless, like the rivers.
I found this poem to be powerful and moving, and it made me feel joyous and uplifted, yet humbled by what it portrayed. I felt that Hughes was rightfully proud of his race, that he understood the importance of his ancestors and that for him, history was a testament to the strength of his people. The opening line "I've known rivers", is so simple, but when repeated and added to in the words that follow, gathers and sends a powerful message. Rivers are the lifeblood of the planet, and he links that idea to humanity with "flow of blood in human veins" (l. 3). By joining body and soul: "My soul has grown deep like the rivers" ( l. 5 and 13), he expressed the truth about all of us. We are all body and soul. But he is stating that the Black soul has withstood much and held fast to wisdom and strength. With the repetition of the words "I've known rivers/Ancient, dusky rivers, (l. 11-12) he brings to life the dark skin of his people and there is pride in the depth of his and their souls at the end of the poem. It is full of vibrant imagery and has the musical tones of a song, or a Negro spiritual.
He used the metaphor of the rivers to say that despite suffering, slavery and loss, the Negro race have withstood all adversity. Just as the rivers have lasted, strong and wise since the dawn of time, so too has the Black African American soul. I believe there was a tone of triumph and promise in the words: "I've seen it's muddy bosom turn all golden in the sunset." (l. 9-10), as the muddy Mississippi changed with the coming of freedom.
The poem also made me feel sad to think that this hope and power, despite such wisdom and proof of the worth of the African American, has not been fully realized, so many years later. Langston Hughes dedicated the poem to the historian and activist, W. E. B. Du Bois, and wrote it when only 17 years old, yet it shows a deep soul and a wise mind, full of ancient wisdom. I would be happy to stand beside such a man.
Work Cited
Hughes, Langston. The Negro Speaks of Rivers. English 1102, Compositions and
Modern English 11 (8th Ed.). Boston, Mass. Pearson Custom Publishing.
Custom Edition for Troy University. 2007. 461-462
Bibliography
Blau DuPlessis, R. Genders, Races and Religious Cultures in Modern American
Poetry, 1908-1943. Cambridge. Cambridge University Press. 2001
McMahan, D., Day, S. X. and Funk, R. Literature and the Writing Process. (7th Ed)
New Jersey. Prentice Hall. 2004
The Art and Language of Langston Hughes. Kentucky. The University Press of
Kentucky. 1989 Read More
Share:
Tags
Cite this document
(“The Negro Speaks of Rivers by (Langston Hughes) Essay”, n.d.)
Retrieved de https://studentshare.org/miscellaneous/1525094-the-negro-speaks-of-rivers-by-langston-hughes

(The Negro Speaks of Rivers by (Langston Hughes) Essay)
https://studentshare.org/miscellaneous/1525094-the-negro-speaks-of-rivers-by-langston-hughes.

“The Negro Speaks of Rivers by (Langston Hughes) Essay”, n.d. https://studentshare.org/miscellaneous/1525094-the-negro-speaks-of-rivers-by-langston-hughes.
Comments (0)
Click to create a comment or rate a document

...? “What happens to a dream deferred Does it dry up/like a raisin in the sun? /Or fester like a sore- and then run Does it stink like rotten meat? /Or crust and sugar over-/like a syrupy sweet? / May be it just sags/ like a heavy load. / Or does it explode? (Harlem: A Dream Deferred - Collected Works of Langston Hughes, Vol.3.) Langston Hughes is one of the most influential African American writers of the twentieth century. He was one of the leaders of the ‘Harlem Renaissance” of the 20’s and 30’s that was centered in the Harlem neighborhood of New York City and that saw an upsurge of the cultural expression of the black people including musicians Musicians ,poets and writers. Not only black literature but other forms of expression... of the...
5 Pages(1250 words)Book Report/Review

...here 3 August A Part of It All Regardless of whether or not America and the rest of the world want to admit it, Harlem Renaissance poet Langston Hughes and his fellow African Americans are – and have been for thousands of years – an integral and vital part of the land in which they inhabit. This epic truth rings true in two of Hughes’ poems, “The Negro Speaks of Rivers” and “I Too.” Contending for identity and a sense of importance within the white-dominated racist culture dominating the United States in the 1920s, the renowned Black author used these poems to tell the reader that Blacks have always belonged and share a rich heritage....
5 Pages(1250 words)Term Paper

...8 April Poetry Normal words are simply incapable of inspiring the same feelings in ones heart as poetry does. This essay is a comparisonbetween two relatively contemporary poems, The Negro Speaks of the River by Langston Hughes and The Secretary Chant by Marge Piercy. The poem by Langston Hughes is in homage to the depth and strength of the soul of the black people. It was published in 1921, when black people were still referred to as Negroes and were subjected to racist prejudice. Langston Hughes wrote the poem when he was only 17 and dedicated it to W. E. B. Du Bois...
3 Pages(750 words)Essay

...that he is not being very effective in putting off his worries, despite all his efforts to stay happy. He keeps on playing till late night; and, when he goes to bed, he dreams of himself as a rock with no emotions or a dead man. The musician is a Negro in the poem. And he is sad. This refers to the poet himself, because Hughes was an African-American, and was also a victim of racism. Hence, the poem talks about his own gloom and shattered state of mind, because he has to go through emotional turmoil due to his race. “The Negro Speaks of Rivers” Langston Hughes, being an African-American poet, suffered from racial...
3 Pages(750 words)Essay

...A Discussion of the Major Themes in the Poetry of Langston Hughes Langston Hughes is regarded as one of the major African-American poets. In a sensethis designation might be seen as an ironic commentary upon the very dilemmas and themes that Hughes wanted to tackle within his career. Should he be regarded as "African-American", "American" or simply a poet Hughes constantly returned to the theme of how a person should identify him/herself and how society would do the same thing. Should a person agree with how he is classified or should he insist upon a self-definition and self-realization. It is these themes that will be considered in this...
8 Pages(2000 words)Book Report/Review

..._________ ID: _____ ID: _____ Introduction It is often considered that despite all the poetic efforts in favor of Southern blacks, Langston Hughes's viewed south as if it were a huge nightmare. Unlike his fellow writers, he was not ready to welcome the Southern experience open heartedly, the cause was simple. What Langston sought and admire was the communal identity in Southern blacks. His work is the greatest evidence of the racial unity he experienced directly throughout his life and it was due to this experience that he served in strengthening the faith constructing an ideal America. Langston's sensitive nature was also responsible paradoxically in reinforcing his...
9 Pages(2250 words)Essay

.... New York: Norton, 1996. 1258. Print. In this text, Langston expresses the need to fight for the right of citizenship and equal treatment among the Americans. He states that, for people to be given equal treatment despit of belonging in different races, they have to be firm on what they believe in. He stresses that individuals must not be judged by their outside look instead of getting to know his or her ability since the better side of a person might be hidden. By stating that “I, too am an American” in his poem, he illustrates that he is still an American even though he is black in color and therefore should be treated fairly and equally to the whites. Hughes, Langston. “The...
2 Pages(500 words)Annotated Bibliography

Explication of a poem

...Langston Hughes’ Self-expression through Poetry: “Danse Africaine”, “Lenox Avenue: Midnight”, and “Dream Boogie” LangstonHughes is one of the most celebrated and well-known African-American poets and has been active around the middle of the 20th century, around the time when the Civil Rights Movement has been gaining ground. Hughes is much known for his insightful and colorful portrayals of how African-Americans lived during the 20’s up to the 60’s, and was credited for the growth and development of the Harlem Renaissance (Academy of American Poets). Using his own experiences and fusing these with concepts strongly-tied and significant to African-American culture such as dancing and the...
4 Pages(1000 words)Essay

Let us find you another Essay on topic The Negro Speaks of Rivers by (Langston Hughes) for FREE!