Comments (0)
Add to wishlistDelete from wishlist
Cite this document
Summary
Costco Wholesale Corporation was originally founded in Kirkland, Washington way back in September 15, 1983. Since then Costco has its headquarter moved and is currently situated in Issaquah, Washington, United States. The corporation also enjoys good trade existence in countries such as Canada, Japan, Australia, Taiwan, Mexico, South Korea, and the United Kingdom…
Download full paperFile format: .doc, available for editing
HIDE THIS PAPERGRAB THE BEST PAPER98.9% of users find it useful 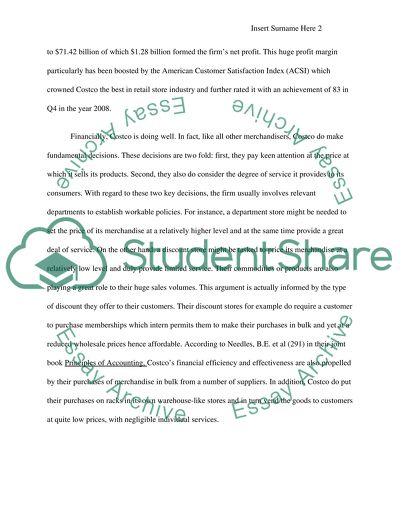 Download file to see previous pages Globally, the firm is rated the ninth merchandising corporation. Additionally, Costco has been regarded the largest seller of fine wine entirely in the world, since October 2007. In the United States in particular, the main challengers operating membership stores are companies such as Sam's Club as well as BJ's Wholesale Club.
Between the two competitors, Sam's Club actually has more warehouses than Costco as a matter of comparison. However, Costco does register superior overall sales volume (Costco Wholesale company profile 8). This informs Costco's ability to employ roughly 142,000 employees on full- and part-time basis, including even the seasonal workforce. Costco had about 55 million memberships by September 2009.[update] For financial year 2009, the Costco's sales summed to $71.42 billion of which $1.28 billion formed the firm's net profit. This huge profit margin particularly has been boosted by the American Customer Satisfaction Index (ACSI) which crowned Costco the best in retail store industry and further rated it with an achievement of 83 in Q4 in the year 2008.
Financially, Costco is doing well. In fact, like all other merchandisers, Costco do make fundamental decisions. These decisions are two fold: first, they pay keen attention at the price at which it sells its products. Second, they also do consider the degree of service it provides to its consumers. With regard to these two key decisions, the firm usually involves relevant departments to establish workable policies. For instance, a department store might be needed to set the price of its merchandise at a relatively higher level and at the same time provide a great deal of service. On the other hand, a discount store might be tasked to price its merchandise at a relatively low level and duly provide limited service. Their commodities or products are also playing a great role to their huge sales volumes. This argument is actually informed by the type of discount they offer to their customers. Their discount stores for example do require a customer to purchase memberships which intern permits them to make their purchases in bulk and yet at a reduced wholesale prices hence affordable. According to Needles, B.E. et al (291) in their joint book Principles of Accounting, Costco's financial efficiency and effectiveness are also propelled by their purchases of merchandise in bulk from a number of suppliers. In addition, Costco do put their purchases on racks in its own warehouse-like stores and in turn vend the goods to customers at quite low prices, with negligible individual services.
COSTCO'S FINANCIAL HIGHLIGHTS
Operating Results (In million)
Fiscal-Year Ended August 28, 2005 August 29, 2004 Change
Net revenue $ 52,935 $ 48,107 10.0%
Cost of sales 46,347 42,092 10.1
Gross margin $ 6,588 $ 6,015 9.5
Operating expenses 5,114 4,630 10.5
Operating income ...Download file to see next pagesRead More
Share:
Tags
Cite this document
(“Management Issues and Policies Case Study Example | Topics and Well Written Essays - 1750 words”, n.d.)
Management Issues and Policies Case Study Example | Topics and Well Written Essays - 1750 words. Retrieved from https://studentshare.org/miscellaneous/1522173-management-issues-and-policies

CHECK THESE SAMPLES OF Management Issues and Policies

Assess the human resources management strategy and policies of the Royal Mail over the period 2005-2010.The evidence you consider should be evaluated in the context of the relevant HRM theory and literature.Among other issues students may wish to consider

...Assessment of the human resources management strategy and policies of the Royal Mail over the period 2005 Introduction At presentRoyal Mail Group is in the process of reorganization, caused by governmental regulation and economic crisis. For several centuries Royal Mail had been a government department and monopolized national market of postal services, but after nationalization of 1969 it came through numerous changes. Within this period its infrastructure, range of services provided, methods of customers’ servicing, management system and other substantially altered. In 2001 the Group was redirected to Consignia plc and further transformed into Royal Mail Group Ltd (RMG). It has lost monopoly on UK postal market and, thus, endures...
12 Pages(3000 words)Essay

Civil Aviation Administration of China (CAAC) – undoubtedly advanc...
7 Pages(1750 words)Assignment
sponsored ads
Save Your Time for More Important Things
Let us write or edit the case study on your topic "Management Issues and Policies" with a personal 20% discount.
GRAB THE BEST PAPER

Let us find you another Case Study on topic Management Issues and Policies for FREE!