Comments (0)
Add to wishlistDelete from wishlist
Cite this document
Summary
Bank reports about Kuwait are quite favorable, what with all the expectations about its continuous budget surplus and its current fiscal position. Owning 9 percent of the world's crude reserves and ranking fourth in Middle East as an oil exporter, Kuwait could just be perfect financial center, taking into account its very liquid position (El Gamal, 2007).
…
Download full paperFile format: .doc, available for editing
HIDE THIS PAPERGRAB THE BEST PAPER91% of users find it useful 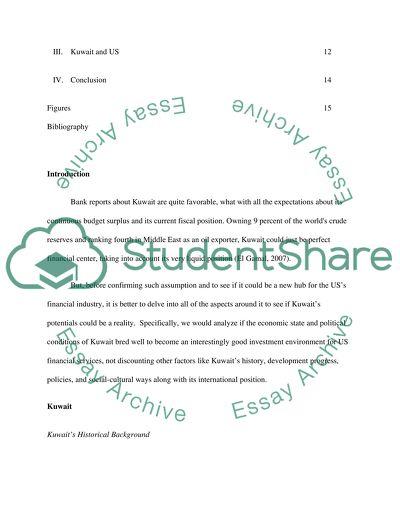 Download file to see previous pages Once a British colony, Kuwait's independence was granted in 1961. Throughout, its economy's survival is almost entirely bolstered by its oil production and sales. With the income, the government can have considerable support for its revenues, and attract in foreign workers (Factsheet, 2007).
When Iraq under Saddam Hussein absorbed Kuwait in the 1990s, Iraq was overthrown from the country by a US-led military coalition, an event known as the 1991 Gulf war. With that aid, Kuwait became a close ally of the US (Factsheet, 2007).
As IMF and the World Bank encouraged most of the countries to do, Kuwait opened to foreign capital and vied for international investment starting from the 1990s. Mainly, Kuwait's strategy is to produce and sell as much oil as they can worldwide that it would become largely, the sole provider of the world's oil and US would certainly have it in its interests. (Pfeifer, 2002) Being the fourth largest producer now, this isn't a far-fetch goal.
FDI had been advocated by many to be the boost developing economies need in order to progress sustainably. Globalization through FDI is a mainstream event since the 90s. But policymakers in Kuwait as in the other developing countries are not aware that when their economic fundamentals do not match what is needed for this increase in FDI, however many the incentives they offer to attract FDI , they would just go to waste. But, internationalization through exports is Kuwait's overriding strategy; it is a country looking toward development by globalizing through FDI. (Nunnenkamp, 2001)
Kuwait's Foreign Direct Investment
A costly financial initiative like the later-to-be-discussed FDI Law is implemented because Kuwait anticipates the potential benefits to outweigh these costs. But the view's shortcoming is that Kuwait, like the others, cannot be sure if FDI really could do much in gearing them towards development. After all, the impact of FDI relies on many ...Download file to see next pagesRead More
Share:
Tags
Cite this document
(“International Business Environment Essay Example | Topics and Well Written Essays - 3500 words - 1”, n.d.)
International Business Environment Essay Example | Topics and Well Written Essays - 3500 words - 1. Retrieved from https://studentshare.org/miscellaneous/1517325-international-business-environment

... much for children, young professional, college students, tourists, and business travelers. As we talk about the environment of Club IT that is designed in a very good way with High ceilings, live music, dance floor and energy lighting. Here we can eat and drink watch move and lot of other entertainment (Case Study). Current Technology Structure of Club IT This section is about the present technology structure at Club IT. In the present structure they have small computer based database system, a small Internet, security system and small other IT based structures. They have main IT equipments that comprise a Computer and a printer, Software, Modem, Photocopier, Fax Machine, Postage Scale and Meter and Paper Shredder. The communication...
8 Pages(2000 words)Case Study

..., 2000). This theory discouraged the notion of self-interest while promoting every individual to act as a means of charity. Analysis from the point of view of Kant’s deontology (Furrow, pp. 79-88, 2005) indicates that Coca-Cola has been very unethical in its actions. All the practices discussed earlier in the paper were universally inappropriate and adverse for farmers and their families, as well unsustainable for the whole environment that became the victim of Coca Cola’s bottling plant in Kala Dera, and several other villages in India. Conclusion In conclusion, it is an observation that only one ethical theory showed ethical status of Coca Cola’s business practices in India, whereas, the other two regarded them as unethical. Personally...
10 Pages(2500 words)Case Study

Civil Aviation Administration of China (CAAC) – undoubtedly advanc...
7 Pages(1750 words)Assignment
sponsored ads
Save Your Time for More Important Things
Let us write or edit the essay on your topic "International Business Environment" with a personal 20% discount.
GRAB THE BEST PAPER

Let us find you another Essay on topic International Business Environment for FREE!