Comments (0)
Add to wishlistDelete from wishlist
Cite this document
Summary
Retired Harvard Business School Professor John P. Kotter, who was born in 1947, is a graduate of MIT and Harvard. He joined the Harvard Business School faculty in 1972 and is today considered to be the world's leading expert on leadership and change. He is the author of numerous articles published over the past two decades in The Harvard Business Review as well as 15 books on these topics that are in the top 1% of sales from Amazon.com…
Download full paperFile format: .doc, available for editing
HIDE THIS PAPERGRAB THE BEST PAPER92.2% of users find it useful 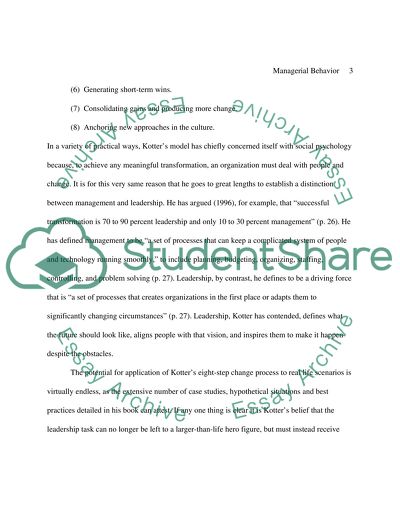 Download file to see previous pages He based his model on many years of consulting experience that gave him insights on the many complex difficulties that organizations face with their change efforts, around which he developed a platform of central themes that involve an eight-step process for implementing successful organizational transformations.
Kotter's guiding principle in the book, which is that most organizations today lack the leadership they need,is based on a series of six articles that he originally published in The Harvard Business Review. To summarize, his eight-step change process prescribes:
In a variety of practical ways, Kotter's model has chiefly concerned itself with social psychology because, to achieve any meaningful transformation, an organization must deal with people and change. It is for this very same reason that he goes to great lengths to establish a distinction between management and leadership. He has argued (1996), for example, that "successful transformation is 70 to 90 percent leadership and only 10 to 30 percent management" (p. 26). He has defined management to be "a set of processes that can keep a complicated system of people and technology running smoothly," to include planning, budgeting, organizing, staffing, controlling, and problem solving (p. 27). Leadership, by contrast, he defines to be a driving force that is "a set of processes that creates organizations in the first place or adapts them to significantly changing circumstances" (p. 27). Leadership, Kotter has contended, defines what the future should look like, aligns people with that vision, and inspires them to make it happen despite the obstacles.
The potential for application of Kotter's eight-step change process to real life scenarios is virtually endless, as the extensive number of case studies, hypothetical situations and best practices detailed in his book can attest. If any one thing is clear it is Kotter's belief that the leadership task can no longer be left to a larger-than-life hero figure, but must instead receive modest contributions from all people within an organization, because everyone can assist with the leadership agenda in their individual spheres of activity.
Managerial Behavior 4
The implications of Kotter's model as it might apply to a surgical nurse is that, rather than managing change, he or she can make modest contributions to the organization by leading
it on the front lines where matters of life and death are concerned. In considering that the first stage of the eight-stage change process is establishing a sense of urgency, it is logical that a surgical nurse could be the individual best positioned to observe and make suggestions to supervisors for improvements in patient care, ...Download file to see next pagesRead More
Share:
Tags
Cite this document
(“Managerial Behavior: Kotters Model for Organization Change Essay”, n.d.)
Retrieved from https://studentshare.org/miscellaneous/1515174-managerial-behavior-kotters-model-for-organization-change

It was in the 1990s that the world began to hear serious warnings on global warming and climate change. The summary for policymakers prepared as part of the first assessment report by the Intergovernmental Panel on Climate Change was the first-ever in-depth study on this topic (Houghton, Jenkins and Ephirams, 1990). This report explored climate change and stumbled upon revolutionary revelations. This study announced in very clear terms that there is a natur...
6 Pages(1500 words)Literature review

Climate change and globalization are intricately linked. With the passage of time, many environmental issues, like global warming, have...
6 Pages(1500 words)Coursework
sponsored ads
Save Your Time for More Important Things
Let us write or edit the essay on your topic "Managerial Behavior: Kotters Model for Organization Change" with a personal 20% discount.
GRAB THE BEST PAPER

Let us find you another Essay on topic Managerial Behavior: Kotters Model for Organization Change for FREE!