Comments (0)
Add to wishlistDelete from wishlist
Cite this document
Summary
Quite often, a man's individual responsibility towards mankind is quite at odds with that of the government's. The role of the government is designed to maintain law and order in the state. It may as well be the case that the two roles are quite in contrast…
Download full paperFile format: .doc, available for editing
HIDE THIS PAPERGRAB THE BEST PAPER97% of users find it useful 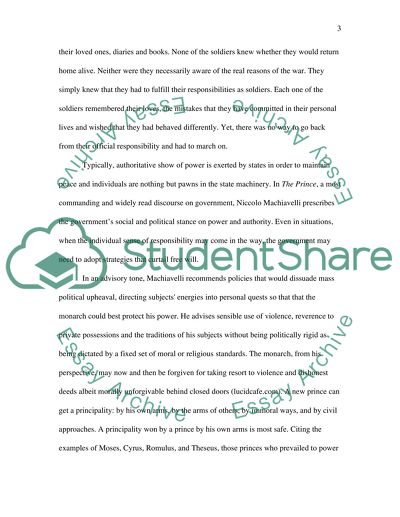 Download file to see previous pages This is quite evident in George Orwell's short story, A Hanging (first published in 1931 and reprinted in James and Merickel, 2001), the author describes a European's experience of watching a Hindu man's execution in Burma. As he acknowledges, he has never known what it feels like to destroy a perfectly healthy human body. Throughout the story, there is no inkling that the executioners know what the prisoner is accused of or why he is being hanged. It is simply the Europeans' duty to carry out orders in the name of the law. They go about doing their duty mechanically and go for their drink after the execution is over, quite oblivious of what the dead man could have felt like in his last minutes. The executioner, in his role as the government's representative, is simply carrying out his assigned role even when personally, the act is disgusting to him.
In Things They Carried (reprinted in James and Merickel, 2001), Tim O'Brien describes the things that a group of soldiers carried with them when they went to the World War II. While most of them carried things of utter necessities, like can openers, pocket knives, wrist watches, mosquito repellants and so on, some also carried letters of their loved ones, diaries and books. None of the soldiers knew whether they would return home alive. Neither were they necessarily aware of the real reasons of the war. They simply knew that they had to fulfill their responsibilities as soldiers. Each one of the soldiers remembered their loves, the mistakes that they have committed in their personal lives and wished that they had behaved differently. Yet, there was no way to go back from their official responsibility and had to march on.
Typically, authoritative show of power is exerted by states in order to maintain peace and individuals are nothing but pawns in the state machinery. In The Prince, a most commanding and widely read discourse on government, Niccolo Machiavelli prescribes the government's social and political stance on power and authority. Even in situations, when the individual sense of responsibility may come in the way, the government may need to adopt strategies that curtail free will.
In an advisory tone, Machiavelli recommends policies that would dissuade mass political upheaval, directing subjects' energies into personal quests so that that the monarch could best protect his power. He advises sensible use of violence, reverence to private possessions and the traditions of his subjects without being politically rigid as being dictated by a fixed set of moral or religious standards. The monarch, from his perspective, may now and then be forgiven for taking resort to violence and dishonest deeds albeit morally unforgivable behind closed doors (lucidcafe.com). A new prince can get a principality: by his own arms, by the arms of others, by immoral ways, and by civil approaches. A principality won by a prince by his own arms is most safe. Citing the examples of Moses, Cyrus, Romulus, and Theseus, those princes who prevailed to power through their own skills ruling well, he points out that they were all armed, unlike Savaronola, who lost his command as he did not take resort to arms. According to him, a principality acquired by the arms of others requires a prince with both luck and high merit. Cesare Borgia was lucky to have ...Download file to see next pagesRead More
Share:
Tags
Cite this document
(“Government responsibility Vs Individual responsibilty Essay”, n.d.)
Government responsibility Vs Individual responsibilty Essay. Retrieved from https://studentshare.org/miscellaneous/1514250-government-responsibility-vs-individual-responsibilty

CHECK THESE SAMPLES OF Government responsibility Vs Individual responsibilty

... Mansfield. Lord Mansfield though rejected Carter’s claim for not having disclosed the material facts, he cited an example of the insurer insuring the ship knowing full well that it had already arrived. He observed that good faith prohibited either party from hiding the fact so as to tempt the other into a bargain. The principle of mutual responsibility of disclosure was challenged by the underwriters in Banque financiere de la Cite SA v Westgate Insurance Company Ltd2. Although a non- marine case, it may be relevant for the purpose of utmost good faith principle. A group of banks advanced monies to four companies represented by one Mr Ballestro on the basis credit insurance policies. The gemstones deposited as security for the loan turned...
6 Pages(1500 words)Case Study

A holistic understanding why organizations can have such lasting effect on the society may be drawn from Dawe’s (1970; p.214) explanation of sociology that identifies two distinct aspects, sociology of social...
8 Pages(2000 words)Assignment
sponsored ads
Save Your Time for More Important Things
Let us write or edit the essay on your topic "Government responsibility Vs Individual responsibilty" with a personal 20% discount.
GRAB THE BEST PAPER

Let us find you another Essay on topic Government responsibility Vs Individual responsibilty for FREE!