Comments (0)
Add to wishlistDelete from wishlist
Cite this document
Summary
Occupational safety and heath is concerned with protecting the health and safety of people at their workplace. At a secondary level, it also deals with the health and welfare of the families of the workers. The International Labour Organisation (ILO) and the World Health Organisation (WHO) unitedly define Occupational Health as, "Occupational health should aim at: the promotion and maintenance of the highest degree of physical, mental and social well-being of workers in all occupations; the prevention amongst workers of departures from health caused by their working conditions; the protection of workers in their employment from risks resulting from factors adverse to health; the placing and m…
Download full paperFile format: .doc, available for editing
HIDE THIS PAPERGRAB THE BEST PAPER91% of users find it useful 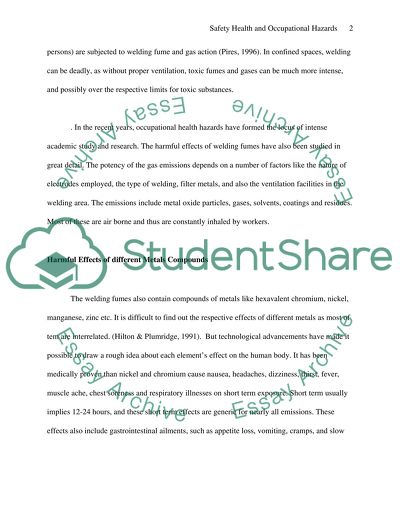 Download file to see previous pages Welding, a major industrial process is concerned with joining metals by using a filler material. This filler material, known as the consumable is usually a coated electrode or wire. The process of melting this and the parent metal releases particulate fumes and gases, majority of which is produced from the consumable. The four most common welds are the tungsten inert gas (TIG), metal inert gas (MIG), metal active gas (MAG), and manual metal arc (MMA). (Pires et al, 2006)
Some of these emissions are toxic in nature which can prove hazardous on prolonged exposure. Presently, 1-2% of workers from different professional backgrounds (some 3 million persons) are subjected to welding fume and gas action (Pires, 1996). In confined spaces, welding can be deadly, as without proper ventilation, toxic fumes and gases can be much more intense, and possibly over the respective limits for toxic substances.
. In the recent years, occupational health hazards have formed the locus of intense academic study and research. The harmful effects of welding fumes have also been studied in great detail. The potency of the gas emissions depends on a number of factors like the nature of electrodes employed, the type of welding, filter metals, and also the ventilation facilities in the welding area. The emissions include metal oxide particles, gases, solvents, coatings and residues. Most of these are air borne and thus are constantly inhaled by workers.
Harmful Effects of different Metals Compounds
The welding fumes also contain compounds of metals like hexavalent chromium, nickel, manganese, zinc etc. It is difficult to find out the respective effects of different metals as most of tem are interrelated. (Hilton & Plumridge, 1991). But technological advancements have made it possible to draw a rough idea about each element's effect on the human body. It has been medically proven than nickel and chromium cause nausea, headaches, dizziness, thirst, fever, muscle ache, chest soreness and respiratory illnesses on short term exposure. Short term usually implies 12-24 hours, and these short term effects are generic for nearly all emissions. These effects also include gastrointestinal ailments, such as appetite loss, vomiting, cramps, and slow digestion. Nickel and Chromium fumes can also cause skin rashness and dermatitis. Nickel is also known to cause asthma, while chromium may cause sinusitis.
The chronic, long term effects of fumes containing nickel and chromium still remain ambiguous, but there are vague indications that they might be carcinogenic in nature i.e. they might act as cancer causing agents. The National Institute for Occupational Safety and Health has declared that some forms of hexavalent chromium, nickel and their inorganic compounds be considered carcinogenic.(American Welding Society, 2003) As a matter of fact, the long term effects of welding smoke in general remain disputes. Though there are reasons to believe that prolonged exposure might lead to immunosuppression, lung cancer development, ...Download file to see next pagesRead More
Share:
Tags
Cite this document
(“Safety Health and Occupational Hazards Essay Example | Topics and Well Written Essays - 2250 words”, n.d.)
Safety Health and Occupational Hazards Essay Example | Topics and Well Written Essays - 2250 words. Retrieved from https://studentshare.org/miscellaneous/1508146-safety-health-and-occupational-hazards

CHECK THESE SAMPLES OF Safety Health and Occupational Hazards

Worse, because the family sometimes cannot afford to cover their medical expenses, these mentally ill patients end up with no medical care at all; they are forced to suffer the debilitating symptoms of their mental illness and to be subjected to worsening mental and general health conditions.
This paper shall discuss the lack of insurance among mentally ill patients. It shall first describe the mental health issue and the student’s position on such an issue. This paper shall also explain why this position is important and the relevance of the position to nursing practice, the mentally ill, and society. The rationale of this position shall be clearly explained and two factors that contribute to this issue shall be identi...
8 Pages(2000 words)Assignment
sponsored ads
Save Your Time for More Important Things
Let us write or edit the essay on your topic "Safety Health and Occupational Hazards" with a personal 20% discount.
GRAB THE BEST PAPER

Let us find you another Essay on topic Safety Health and Occupational Hazards for FREE!