Comments (0)
Add to wishlistDelete from wishlist
Cite this document
Summary
The effectiveness of the communication between the organization and its intended public was exemplary in its nature. Johnson and Johnson, although only the parent company of McNeil Consumer Products subsidiary stepped in immediately, taking swift and decisive action to contain the situation…
Download full paperFile format: .doc, available for editing
HIDE THIS PAPERGRAB THE BEST PAPER97% of users find it useful 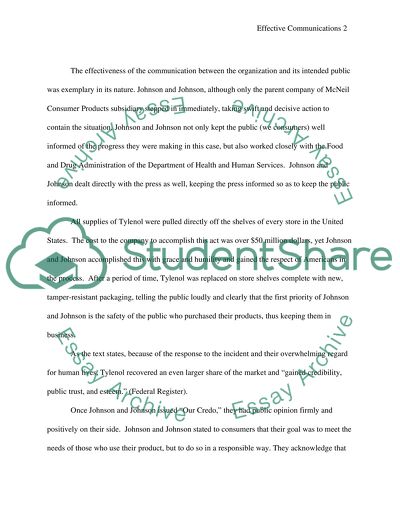 Download file to see previous pages All supplies of Tylenol were pulled directly off the shelves of every store in the United States. The cost to the company to accomplish this act was over $50 million dollars, yet Johnson and Johnson accomplished this with grace and humility and gained the respect of Americans in the process. After a period of time, Tylenol was replaced on store shelves complete with new, tamper-resistant packaging, telling the public loudly and clearly that the first priority of Johnson and Johnson is the safety of the public who purchased their products, thus keeping them in business.
As the text states, because of the response to the incident and their overwhelming regard for human lives, Tylenol recovered an even larger share of the market and "gained credibility, public trust, and esteem." (Federal Register).
Once Johnson and Johnson issued "Our Credo," they had public opinion firmly and positively on their side. Johnson and Johnson stated to consumers that their goal was to meet the needs of those who use their product, but to do so in a responsible way. They acknowledge that they have the right to make a fair profit, which, again, puts public opinion firmly in their corner. ...
Another public might be considered the people such as doctors, nurses and the institutions of hospitals that regularly dispense Tylenol to their patients. This sector of the public had a grave responsibility in the face of the Tylenol tragedy, in that they had to make absolutely sure that none of the product that could possibly have been contaminated remained in their hospitals. A possible third public could be the press, who, in many cases become the most direct line to the general public. What the press is told and what they release to the general public is extremely important and akin to walking a tightrope.
The internal public would be the employees and stockholders of Johnson and Johnson. The employees were put into a difficult situation in that if public opinion, fickle as it is, had gone the "other" direction; the employees of Johnson and Johnson could well have borne the brunt of public righteous indignation. It would have become rather non-politic to answer the question "Where do you work," because the employees would have been guilty by association.
The stockholders, another faction of the internal public would have been seen as equally "guilty," and it is likely that rumors would have abounded concerning the culpability of the stockholders in the aftermath of tragedy.
The external public, on the other hand, I would see as the consumer of Johnson and Johnson products. I'm sure every mother and father in America experienced a sense of panic and horror when they learned of the cyanide laced Tylenol capsules, thinking it could have been their child or another parents' child that fell victim to the capsules. It was ...Download file to see next pagesRead More
Share:
Tags
Cite this document
(“Effective Communications Essay Example | Topics and Well Written Essays - 1250 words”, n.d.)
Retrieved from https://studentshare.org/miscellaneous/1508064-effective-communications

CHECK THESE SAMPLES OF Effective Communications

It contains a shot of a group of Americans protesting against the health plan which induces a negative feeling as the target audience usually relates to the public shown in tapes.  There are no shots in this ad showing the American flag which usually gives the audience a sense of oneness, leaving a positive effect. The video does not have any positive comments regarding the health plan which means that both sides of an argument are never featured in the same ad. There are several shots in this advertisement showing various political leaders making comments regarding the health plan which aims at statistically proving the lack of support regarding the same.  It includes shots where politicians are asked questions to wh...

6 Pages(1500 words)Essay
sponsored ads
Save Your Time for More Important Things
Let us write or edit the essay on your topic "Effective Communications" with a personal 20% discount.
GRAB THE BEST PAPER

Let us find you another Essay on topic Effective Communications for FREE!