Comments (0)
Add to wishlistDelete from wishlist
Cite this document
Summary
The last two decades have witnessed major changes in the migration to European countries. There have been new destinations and new regions of origin for the people to think of migration. This has made most of the traditional models of migration not only inadequate but also out of date…
Download full paperFile format: .doc, available for editing
HIDE THIS PAPERGRAB THE BEST PAPER97.6% of users find it useful 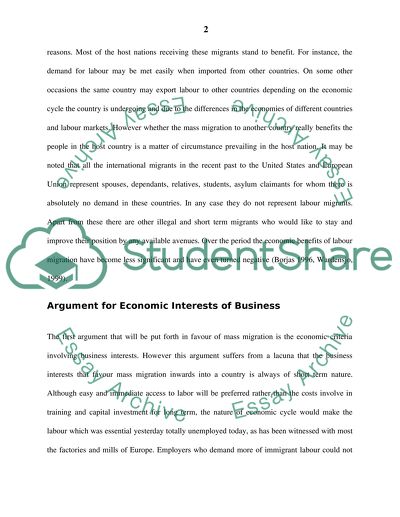 Download file to see previous pages The flows for the non-European region led to a large scale migration to Europe. The increased restrictions on immigration policies have resulted in the increased flow of non-conventional and illegal migrants in to the European nations. The involvement of European Union in the migration policies of the individual member nations has increasingly become necessary and further enlargement in the European Union territory has accentuated this necessity. The flows of migration in both directions have resulted in some major impact on the economies of the host countries in the EU. This paper analyzes the possible effects of the migration as to whether the mass migration results in some benefit or it should be construed as a threat to the nations.
People migrate from one country or region to another for their own benefits which may include getting a better pay, joining the spouse of parent, to obtain more welfare benefits or for security reasons. Most of the host nations receiving these migrants stand to benefit. For instance, the demand for labour may be met easily when imported from other countries. On some other occasions the same country may export labour to other countries depending on the economic cycle the country is undergoing and due to the differences in the economies of different countries and labour markets. However whether the mass migration to another country really benefits the people in the host country is a matter of circumstance prevailing in the host nation. It may be noted that all the international migrants in the recent past to the United States and European Union represent spouses, dependants, relatives, students, asylum claimants for whom there is absolutely no demand in these countries. In any case they do not represent labour migrants. Apart from these there are other illegal and short term migrants who would like to stay and improve their position by any available avenues. Over the period the economic benefits of labour migration have become less significant and have even turned negative (Borjas 1996, Wardensjo, 1999).
Argument for Economic Interests of Business
The first argument that will be put forth in favour of mass migration is the economic criteria involving business interests. However this argument suffers from a lacuna that the business interests that favour mass migration inwards into a country is always of short term nature. Although easy and immediate access to labor will be preferred rather than the costs involve in training and capital investment for long term, the nature of economic cycle would make the labour which was essential yesterday totally unemployed today, as has been witnessed with most the factories and mills of Europe. Employers who demand more of immigrant labour could not be blamed for the changed scenario. If the businesses are made responsible for the dealing the with the life time cost of these labour immigrants they would obviously reduce their demand for immigrant labour and make long term capital investment. However it must be remembered that the countries can not be just treated as just a set of economic levers but they consist of communities of people who have their own shared values, commitments, identities, origins and aspirations all of which will be affected by mass migration of people.
Argument for General Economic Interest
Mass ...Download file to see next pagesRead More
Share:
Tags
Cite this document
(“Is mass migration more of a threat or a benefit to European host Essay”, n.d.)
Retrieved from https://studentshare.org/miscellaneous/1508037-is-mass-migration-more-of-a-threat-or-a-benefit-to-european-host-countries

(Is Mass Migration More of a Threat or a Benefit to European Host Essay)
https://studentshare.org/miscellaneous/1508037-is-mass-migration-more-of-a-threat-or-a-benefit-to-european-host-countries.

“Is Mass Migration More of a Threat or a Benefit to European Host Essay”, n.d. https://studentshare.org/miscellaneous/1508037-is-mass-migration-more-of-a-threat-or-a-benefit-to-european-host-countries.
Comments (0)
Click to create a comment or rate a document

Mass Migration in Europe - a Threat or Benefit to Host Countries

...﻿Mass Migration to Europe: A threat or benefit to host countries? Introduction Europe now compares to North America in its magnitude of immigrants. All European states are now net immigration countries, which means that more immigrants are entering these countries than leaving them. Established host countries like France, Germany, the United Kingdom, Benelux countries, Austria, Switzerland, Sweden and Denmark have been net immigration countries since the 1960s (Boswell 2005, p. 2). Though there was a decline in migration in 1973-4 due to discontinuance of recruitment, there have been high degrees of immigration since the 1990s to most of these countries. Family reunions, refugee flows and labour migration accounted for most...
11 Pages(2750 words)Coursework

... groupings/organisations: UN, NATO, the Council of Europe, the Organisation for Security and Co-operation in Europe (OSCE), Organisation for Economic Co-operation and Development (OECD), an Associate Member of the Western European Union, and a candidate for accession to the European Union (negotiations began on 3 October 2005).”(Country....) The population of Turkey as per World Bank Indicators, as per last updated data on February 2,2010 was 73,914,260.(www.google.com/publicdata) The major events relating to history of Turkey in chronological order are: “BC 7500, First Stone age settlements at Çatalhüyük,1250 The Trojan war and the fall of Troy, 546 Cyrus the Great leads the Persians into Anatolia, 334 Alexander the Great drives out...
9 Pages(2250 words)Case Study

An EWC is a forum that would a...
9 Pages(2250 words)Coursework
sponsored ads
Save Your Time for More Important Things
Let us write or edit the essay on your topic "Is mass migration more of a threat or a benefit to European host countries" with a personal 20% discount.
GRAB THE BEST PAPER

Let us find you another Essay on topic Is mass migration more of a threat or a benefit to European host countries for FREE!