Comments (0)
Add to wishlistDelete from wishlist
Cite this document
Summary
During the Vietnam War, as a reaction of various flag burning actions that were in protest against the war, Congress enacted the first Flag Protection Act in 1968 which was considered as a violation to the freedom of expression that is known to be a basic element in US society…
Download full paperFile format: .doc, available for editing
HIDE THIS PAPERGRAB THE BEST PAPER91.2% of users find it useful 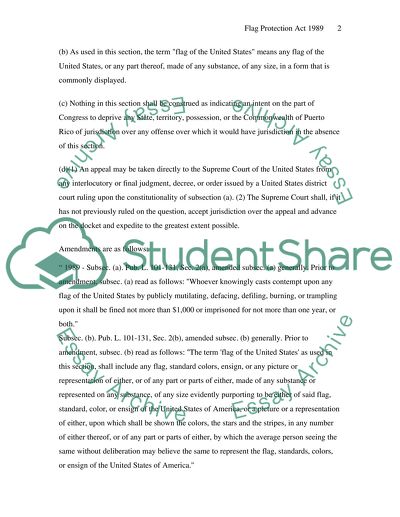 CHECK THESE SAMPLES OF Flag Protection Act of 1989

...Health taking and the Data protection Act The Data Protection Act defines a legal basis for the handling in the UK of information relating to living people. Recording data is just as necessary and important as gathering data. Significant facts should be so recorded that they can be used when and where they are needed. Records must be cumulative, accurate, complete and reliable; there must be space for additional information from time to time. The cumulative record has information concerned with the appraisal of the individual pupil usually kept on a card, sheet, folder, cards in an envelop, or a combination of all. Records should cover the entire span of the student's school career and should be kept in a safe place. The first cumulative...
4 Pages(1000 words)Essay

...﻿Introduction to the Children Act 1989 The Children Act 1989 pulled together and simplified all pre-existing legislation in relation to children and families. It imposes new duties on local authorities (LAs) - for example, the identification and assessment of 'children in need'; a) gave LAs new responsibilities for children that are 'looked after' (eg children in care) b) provided new court orders to protect children at risk of harm (eg Emergency Protection Orders that replaced the old Place of Safety Orders) c) emphasized the importance of inter-agency work and a corporate approach to providing services to children and families (eg the creation of multi-professional responses to children identified as children in need). The Children...
11 Pages(2750 words)Book Report/Review

... and feelings should be incorporated into the decision-making concerning them. Legally based intervention Children's act 1989 is fully equipped with the legal laws and norms that strengthen the cause of Child welfare. These legal intervention are mostly carried out in assistance of Local authority Duty to Investigate - Significant Harm: The Local Authority has a duty to investigate when there is reasonable cause to suspect that a child is suffering, or is likely to suffer, significant harm. The investigation will include an objective of the needs of the child, including the risk of abuse and need for protection, as well as the family's ability to meet those needs. Legal laws are in place to handle Emergency Situations, Emergency...
4 Pages(1000 words)Essay

The Whistleblower Protection Act of 1989

Let us find you another Essay on topic Flag Protection Act of 1989 for FREE!