Demonstration of the Value of Health, Safety and Environmental Programs in Corporate Settings - Essay Example

Comments (0)
Add to wishlistDelete from wishlist
Cite this document
Summary
Occupational Safety and Health Programs are an important component of organizations. Occupational hazards are numerous and expensive to the organizations. There are laws that safeguard the employee's physical and emotional well-being. As per Herzberg's theory, working condition which assures safety is a factor of motivation in organizations.
…
Download full paperFile format: .doc, available for editing
HIDE THIS PAPERGRAB THE BEST PAPER95.8% of users find it useful 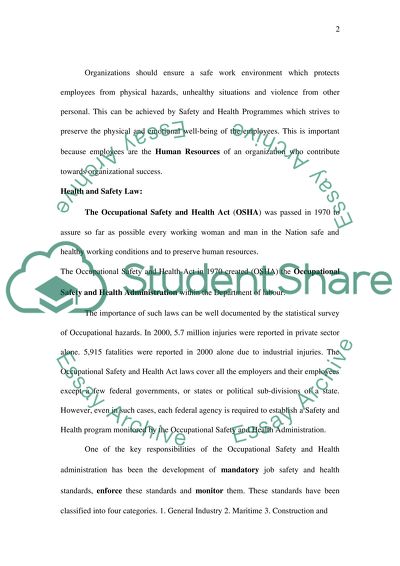 Extract of sample "Demonstration of the Value of Health, Safety and Environmental Programs in Corporate Settings"

Download file to see previous pages 75 million working days are lost because of on-job-hazards. $50 billion are given as compensation for injuries and deaths in organizations. $50 billion is spent on indirect costs like replacement, training and so on (Bohlander, 2004). On average $23,000 per serious accident- is the cost incurred by an employer in U.S.A. When a boiler explosion killed 6 workers at Ford's Rouge Power Plant, Ford was fined $1.5 million and directed to spend $6million on safety measures.
The staggering number of work-related accidents is alarming. 6,026 U.S workers died recently in workplace incidents at work and 6.2 million suffered from workplace injuries and many go unreported. In 2004, 5,703 fatalities have been reported of which 1004 were due to contact with equipments,815 because of falls, 459 due to exposure to harmful substances and 159 due to fire and explosions.
Organizations should ensure a safe work environment which protects employees from physical hazards, unhealthy situations and violence from other personal. This can be achieved by Safety and Health Programmes which strives to preserve the physical and emotional well-being of the employees. This is important because employees are the Human Resources of an organization who contribute towards organizational success.
The Occupational Safety and Health Act (OSHA) was passed in 1970 to assure so far as possible every working woman and man in the Nation safe and healthy working conditions and to preserve human resources.
The Occupational Safety and Health Act in 1970 created (OSHA) the Occupational Safety and Health Administration within the Department of labour.
The importance of such laws can be well documented by the statistical survey of Occupational hazards. In 2000, 5.7 million injuries were reported in private sector alone. 5,915 fatalities were reported in 2000 alone due to industrial injuries. The Occupational Safety and Health Act laws cover all the employers and their employees except a few federal governments, or states or political sub-divisions of a state. However, even in such cases, each federal agency is required to establish a Safety and Health program monitored by the Occupational Safety and Health Administration.
One of the key responsibilities of the Occupational Safety and Health administration has been the development of mandatory job safety and health standards, enforce these standards and monitor them. These standards have been classified into four categories. 1. General Industry 2. Maritime 3. Construction and
4. Agriculture.
These standards cover the workplace, machinery, material, power sources, processing, protective measures, first aid and administrative requirements.
The 'Federal Register' is the main source of information on proposed, adapted, amended and deleted OSHA standards.
The Occupational Safety and Health Administration has the power to set standards on its own account or on petition from other parties, namely, The Secretary of Health and Human Services (HHS) and the National Institute of Occupational Safety and Health (NIOSH). Other bodies like state and local governments, nationality recognized standards organization, employer or labour representative can also initiate standard setting.
The Secretary of labour is the person authorized by OSHA to conduct inspections of workplaces, to ...Download file to see next pagesRead More
Share:
Tags
Cite this document
(“Demonstration of the Value of Health, Safety and Environmental Essay”, n.d.)
Demonstration of the Value of Health, Safety and Environmental Essay. Retrieved from https://studentshare.org/miscellaneous/1507704-demonstration-of-the-value-of-health-safety-and-environmental-programs-in-corporate-settings

“Demonstration of the Value of Health, Safety and Environmental Essay”, n.d. https://studentshare.org/miscellaneous/1507704-demonstration-of-the-value-of-health-safety-and-environmental-programs-in-corporate-settings.
Comments (0)
Click to create a comment or rate a document

CHECK THESE SAMPLES OF Demonstration of the Value of Health, Safety and Environmental Programs in Corporate Settings

In terms of the drawbacks, one of the main issues is the needed resources and expenses which continuously increase due to the i...

... organization The context of health and safety in the business environment can be identified through the reference to their particular aspects; in accordance with ‘health is the protection of the bodies and minds of people from illness resulting from the materials, processes or procedures used in the workplace; safety is the protection of people from physical injury’ (Hughes et al., 2005, 2). On the other hand, supports that ‘the units of analysis of health include individual physiology and workplace environments’ (Glendon et al., 2006, 9). All aspects of employees’ health need to be taken into consideration by a firm’s strategic planners when the organizational practices are set. Measures of safety taken need to be in accordance...
9 Pages(2250 words)Coursework

Worse, because the family sometimes cannot afford to cover their medical expenses, these mentally ill patients end up with no medical care at all; they are forced to suffer the debilitating symptoms of their mental illness and to be subjected to worsening mental and general health conditions.
This paper shall discuss the lack of insurance among mentally ill patients. It shall first describe the mental health issue and the student’s position on such an issue. This paper shall also explain why this position is important and the relevance of the position to nursing practice, the mentally ill, and society. The rationale of this position shall be clearly explained and two factors that contribute to this issue shall be identi...
8 Pages(2000 words)Assignment
sponsored ads
Save Your Time for More Important Things
Let us write or edit the essay on your topic "Demonstration of the Value of Health, Safety and Environmental Programs in Corporate Settings" with a personal 20% discount.
GRAB THE BEST PAPER

Let us find you another Essay on topic Demonstration of the Value of Health, Safety and Environmental Programs in Corporate Settings for FREE!