Comments (0)
Add to wishlistDelete from wishlist
Cite this document
Summary
Virtual organizations are organizations which exist in a virtual world and thus have no physical existence. When it comes to the workings of a virtual organization, there is no need to have all the labor or even any labor at one place at a single point in time…
Download full paperFile format: .doc, available for editing
HIDE THIS PAPERGRAB THE BEST PAPER95.4% of users find it useful 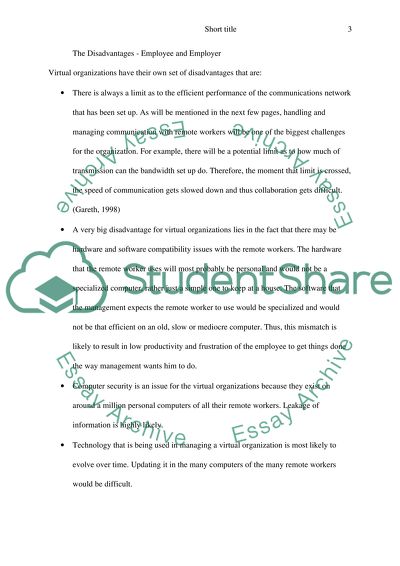 Extract of sample "Working in a Virtual World"

Download file to see previous pages This brings in the best of the talent present in the multiple locations in which the virtual world exists. Moreover, the virtual world brings forth the use of many technologies, which makes it even more interesting, as communication and collaboration becomes easier and working on any project becomes a dream-come-true even if each member of the project is kilometers away from each other. The barriers that would have been present in any virtual organizations - that of time and distance - have been conveniently removed by the technologies that are used, essentially that of telecommunications and computing. Furthermore, the virtual organization is flexible, because it is the management of an organization over a virtual set up. This also makes the virtual organization dynamic and ever-changing; it is restless in nature and dares to experiment with new ideas and creative techniques of operation. And lastly, the most important attribute which gives virtual organizations a unique touch is the integration that results and which enhances and brings out the best in all individuals to level out complete synergy and work in favor of the organization.
There is always a limit as to the efficient performance of the communications network that has been set up. As will be mentioned in the next few pages, handling and managing communication with remote workers will be one of the biggest challenges for the organization. For example, there will be a potential limit as to how much of transmission can the bandwidth set up do. Therefore, the moment that limit is crossed, the speed of communication gets slowed down and thus collaboration gets difficult. (Gareth, 1998)
A very big disadvantage for virtual organizations lies in the fact that there may be hardware and software compatibility issues with the remote workers. The hardware that the remote worker uses will most probably be personal and would not be a specialized computer, rather just a simple one to keep at a house. The software that the management expects the remote worker to use would be specialized and would not be that efficient on an old, slow or mediocre computer. Thus, this mismatch is likely to result in low productivity and frustration of the employee to get things done the way management wants him to do.
Computer security is an issue for the virtual organizations because they exist on around a million personal computers of all their remote workers. Leakage of information is highly likely.
Technology that is being used in managing a virtual organization is most likely to evolve over time. Updating it in the many computers of the many remote workers would be difficult.
The Advantages - Employee and Employer
The virtual organization has many advantages for the employee:
Often organizations experience an increase in production, but there is no as such acceleration in productivity, as should be the case. Therefore, implementing a virtual organization helps increase productivity and the number of output per worker, thus improving quality and not just the quantity of work that is being produced. Moreover, the employee is always at a pressure from all the ...Download file to see next pagesRead More
Share:
Tags
Cite this document
(“Working in a Virtual World Essay Example | Topics and Well Written Essays - 2000 words”, n.d.)
Working in a Virtual World Essay Example | Topics and Well Written Essays - 2000 words. Retrieved from https://studentshare.org/miscellaneous/1507642-working-in-a-virtual-world

CHECK THESE SAMPLES OF Working in a Virtual World

It has as a central idea that whatever else Man does will ultimately end up as nothing. This is the cen...
8 Pages(2000 words)Term Paper
sponsored ads
Save Your Time for More Important Things
Let us write or edit the essay on your topic "Working in a Virtual World" with a personal 20% discount.
GRAB THE BEST PAPER

Let us find you another Essay on topic Working in a Virtual World for FREE!