Comments (0)
Add to wishlistDelete from wishlist
Cite this document
Summary
Looking beyond Westminister, there is even less evidence of a two-party culture. Parties are, it is now generally agreed, indispensable features of democracy. The "two party system" develops out of the one-party predominance only after the resulting civil war had shown a people the danger of party violence…
Download full paperFile format: .doc, available for editing
HIDE THIS PAPERGRAB THE BEST PAPER95.2% of users find it useful 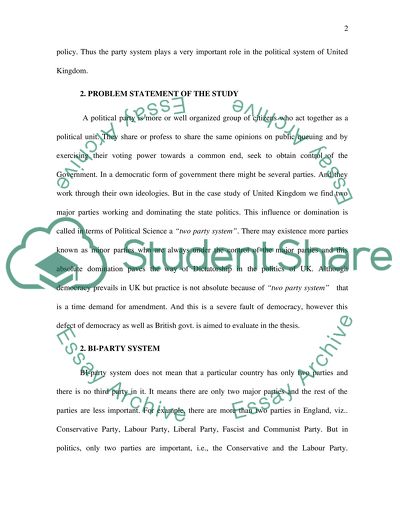 Download file to see previous pages The description of British Government so far given has required frequent mention of political parties. The nearest approach to official recognition is in the rules for the formation of Committees of the House of Commons. Yet without them the whole nature of the Constitution would be changed and many of its conventions would become unworkable. The relations of Parliament to the Government on the one hand, and to the people on the other, are governed by the party system (Field, 1963). The essence of this system is that people who find themselves in agreement on major matters of policy should unite in organized bodies to secure the return to Parliament, and to other elected assemblies, of Members who will work for an agreed policy. Thus the party system plays a very important role in the political system of United Kingdom.
A political party is more or well organized group of citizens who act together as a political unit. They share or profess to share the same opinions on public queuing and by exercising their voting power towards a common end, seek to obtain control of the Government. In a democratic form of government there might be several parties. And they work through their own ideologies. But in the case study of United Kingdom we find two major parties working and dominating the state politics. This influence or domination is called in terms of Political Science a "two party system". There may existence more parties known as minor parties who are always under the control of the major parties and this absolute domination paves the way of Dictatorship in the politics of UK. Although democracy prevails in UK but practice is not absolute because of "two party system" that is a time demand for amendment. And this is a severe fault of democracy, however this defect of democracy as well as British govt. is aimed to evaluate in the thesis.
2. BI-PARTY SYSTEM
BI-party system does not mean that a particular country has only two parties and there is no third party in it. It means there are only two major parties and the rest of the parties are less important. For example, there are more than two parties in England, viz.. Conservative Party, Labour Party, Liberal Party, Fascist and Communist Party. But in politics, only two parties are important, i.e., the Conservative and the Labour Party. Sometimes the Conservative Party and at other times the Labour Party forms the Government. No seat has been obtained by the communist and the Fascist Party. In the House of Commons, the Liberal Party has only a few seats.
Similarly in the U. S. A. though there are, many parties like the Communist Party, the Republican Party and the Democratic Party, yet only Republican and Democratic Par-ties are important and they form the Government. The Communist Party has no importance in the politics, thus, there is a bi-party system in the Great Britain and the U.S.A. Where there is a multi-party system, there are more than two important parties in politics. This system prevails in France, West Germany, Italy and certain other countries of Europe.
3. POLITICAL PARTIES AND 2 PARTY SYSTEM IN UNITED KINGDOM (UK)
The British parties have been inextricable entwined, cross-fertilizing each other with philosophy, policy, strategy and ...Download file to see next pagesRead More
Share:
Tags
Cite this document
(“To what extent does the United Kingdom have a 2 party system Essay”, n.d.)
To what extent does the United Kingdom have a 2 party system Essay. Retrieved from https://studentshare.org/miscellaneous/1507544-to-what-extent-does-the-united-kingdom-have-a-2-party-system

“To What Extent Does the United Kingdom Have a 2 Party System Essay”, n.d. https://studentshare.org/miscellaneous/1507544-to-what-extent-does-the-united-kingdom-have-a-2-party-system.
Comments (0)
Click to create a comment or rate a document

Unemployment is not a straight subject as this is beset with various microeconomic problems of wages, skill, training, hours of work, welfare and myriad of employment dynamics. Therefore, labour economics deals with all these aspects to look into the details and finds a solution (Sundram and Vaish, 1992).

The principal aim of a government is to reduce the rate of unemployment in the economy by framing correct policies, encouraging the gro...
6 Pages(1500 words)Assignment

...The term HYBRID warfare is increasingly used to describe current and future conflict; what is it and what challenges does it present? The end of theCold War and the events of 9/11 have provided a catalyst for unprecedented challenges to the international order and national security policy. Arguably the most important challenge has been the appropriate and most efficacious method to combat a transient and intangible enemy, which transcends borders and the conventional notion of an organised army that “yet has shown a remarkable resilience against traditional military firepower”1. Moreover, Mahmood’s observations highlight the changing nature of conflict and the fact that the contemporary international framework has removed pre-existing...
7 Pages(1750 words)Article
sponsored ads
Save Your Time for More Important Things
Let us write or edit the essay on your topic "To what extent does the United Kingdom have a 2 party system" with a personal 20% discount.
GRAB THE BEST PAPER

Let us find you another Essay on topic To what extent does the United Kingdom have a 2 party system for FREE!