Comments (0)
Add to wishlistDelete from wishlist
Cite this document
Summary
The Mind/body dualism concept states that mind and body are two separate entities and cannot be considered one. Even though the ideas of mind/body dualism existed from the time of Zarathushtra, its present form was formulated by Rene Descartes (1641). He clearly stated that mind is a non physical substance, and identified it as the seat of consciousness and awareness, and associated the brain with intelligence.
…
Download full paperFile format: .doc, available for editing
HIDE THIS PAPERGRAB THE BEST PAPER95.2% of users find it useful 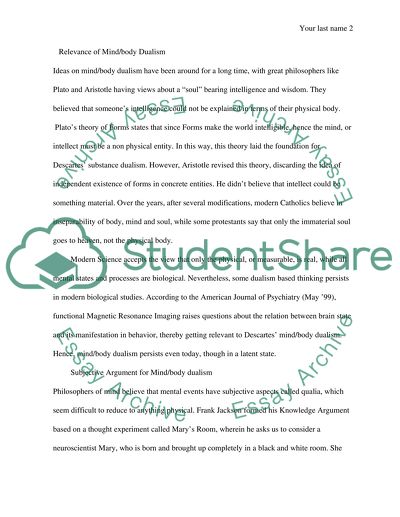 Download file to see previous pages They believed that someone's intelligence could not be explained in terms of their physical body.
Plato's theory of Forms states that since Forms make the world intelligible, hence the mind, or intellect must be a non physical entity. In this way, this theory laid the foundation for Descartes' substance dualism. However, Aristotle revised this theory, discarding the idea of independent existence of forms in concrete entities. He didn't believe that intellect could be something material. Over the years, after several modifications, modern Catholics believe in inseparability of body, mind and soul, while some protestants say that only the immaterial soul goes to heaven, not the physical body.
Modern Science accepts the view that only the physical, or measurable, is real, while all mental states and processes are biological. Nevertheless, some dualism based thinking persists in modern biological studies. According to the American Journal of Psychiatry (May '99), functional Magnetic Resonance Imaging raises questions about the relation between brain state and its manifestation in behavior, thereby getting relevant to Descartes' mind/body dualism. Hence, mind/body dualism persists even today, though in a latent state.
Subjective Argument for Mind/body dualism
Philosophers of mind believe that mental events have subjective aspects called qualia, which seem difficult to reduce to anything physical. Frank Jackson formed his Knowledge Argument based on a thought experiment called Mary's Room, wherein he asks us to consider a neuroscientist Mary, who is born and brought up completely in a black and white room. She collects data on nature of colors on her black and white computer monitor and knows all about the physical aspects of colors. On leaving the room, she will learn what it is like to see these colors, this knowledge being non-physical. It is practically impossible to reduce this sensation to something physical.
Arguments against Dualism
Causal Interaction: Some varieties of dualism claim that immaterial mind can causally interact with the material body, and the material body can interact with and affect the non-physical mind. In the twentieth century, this belief was questioned strongly for violating the heuristic principle of Science-causal closure of the physical world. If something totally non-physical causes a physical event, the law of conservation of energy and basic laws of physics are violated. There is a lack of explanation as to how something without any physical properties has physical effects, and where and how do the material and immaterial interact.
Argument from Brain Damage: It has been scientifically observed that different parts of the brain have certain specific functions, and any physical ...Download file to see next pagesRead More
Share:
Tags
Cite this document
(“Mind/Body Problem Essay Example | Topics and Well Written Essays - 1000 words”, n.d.)
Retrieved from https://studentshare.org/miscellaneous/1507444-mindbody-problem

CHECK THESE SAMPLES OF Mind/Body Problem

Nutrition is pivotal for growth and progression of normal life and also a disease-free life. It is imperative for everybody and much more important in the case of children and infants because they are in their maximum growth stage. Malnutrition at this stage can have serious repercussions for the...
10 Pages(2500 words)Coursework
sponsored ads
Save Your Time for More Important Things
Let us write or edit the essay on your topic "Mind/Body Problem" with a personal 20% discount.
GRAB THE BEST PAPER

Let us find you another Essay on topic Mind/Body Problem for FREE!