Comments (0)
Add to wishlistDelete from wishlist
Cite this document
Summary
Communication or marketing strategies depend on the product or service being sold and also the target audience. In case of automobiles, it depends on the segment of cars being marketed and for which segment of the consumers, the cars is meant for. A sedan which targets the executive market would have a different communication strategy from a sporty SUV which might appeal more to people who go on long trips across the length or breadth of the country…
Download full paperFile format: .doc, available for editing
HIDE THIS PAPERGRAB THE BEST PAPER98.5% of users find it useful 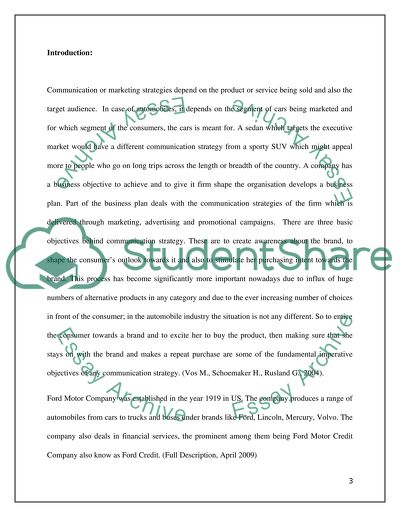 Download file to see previous pages There are three basic objectives behind communication strategy. These are to create awareness about the brand, to shape the consumer's outlook towards it and also to stimulate her purchasing intent towards the brand. This process has become significantly more important nowadays due to influx of huge numbers of alternative products in any category and due to the ever increasing number of choices in front of the consumer; in the automobile industry the situation is not any different. So to entice the consumer towards a brand and to excite her to buy the product, then making sure that she stays on with the brand and makes a repeat purchase are some of the fundamental imperative objectives of any communication strategy. (Vos M., Schoemaker H., Rusland G., 2004).
Ford Motor Company was established in the year 1919 in US. The company produces a range of automobiles from cars to trucks and buses under brands like Ford, Lincoln, Mercury, Volvo. The company also deals in financial services, the prominent among them being Ford Motor Credit Company also know as Ford Credit. (Full Description, April 2009)
Under Cars the brands are Focus sedan, Focus Coupe, Fusion Mustang and Tauras.I n Hybrids the brands are Fusion hybrid an Escape hybrid. The crossover brands are Taurus X, Flex and Edge. SUVs comprise of Escape, Sport Trac, Expedition and Explorer. The trucks range consists of Ranger, F-150, F-250 Super Duty, F - 450 Super Duty and E-Series.
Important marketing campaigns:
Important marketing campaigns in recent times; objectives, target and strategies:
Bold Moves Campaign - In 2006 May, Ford launched a new campaign under the concept 'Bold Moves' to inspire buyers to recognize and appreciate the company's bold new image. The campaign uses famous singer Kelly Clarkson's music with images and video portraying cars and buyers. The goal behind the campaign has been to change the mindset of the consumer towards Ford vehicles which have not been selling in large number. Critics have argued about the campaign pointing out that only a bold campaign would not be making any difference rather a bold product portfolio would help the company in notching up sales. Some experts said that the company had launched the campaign keeping in mind the future also. They said Ford might be using this campaign to make the consumer ready for its future launch of bold vehicles. JWT Marriott was the agency behind the campaign and they claimed that the campaign was a long term one with a complete turn around of the brand on their minds. The turn around effort was termed the Way Forward by the company.( Ford's bold moves fall flat with viewers, August 2006) The Bold Moves campaign was used massively for the Ford crossover vehicle the new EDGE. The company planned to spend more than $100 million behind advertising for the EDGE model. The campaign consisted of television ads on various language TVs which included English, Chinese, Korean, Spanish, etc. famous singer Beyonce Knowles was roped in for singing in the ads. ...Download file to see next pagesRead More
Share:
Tags
Cite this document
(“Communication or marketing strategies Case Study”, n.d.)
Communication or marketing strategies Case Study. Retrieved from https://studentshare.org/miscellaneous/1507333-communication-or-marketing-strategies

CHECK THESE SAMPLES OF Communication or marketing strategies

... the ways in which I interact with people from different cultures. This is not an easy task to do mind you, because communication strategies are often done without ever even thinking about them. Due to this, this essay remains a challenge, but one which I am confident that I tackle. I now turn to an overview of my own culture background. Introduction My name is Yonatan Tan and I was born in Indonesia. I grew up in Indonesia as well and came to this country for a better future. My ancestors originally came from China, and thats why people call us Indo-Chinese, and not Indonesian. For me, it is interesting to talk about culture because essentially I belong to two different cultures. While I was born and grew up in Indonesia, I have...
7 Pages(1750 words)Essay

Internal communication in any organization has been found to play a significant role in regard to role achievement in any business venture. When the internal communication department closely works with the top management, it has been found that job satisfaction levels rise which in effect translates to higher individual and group output from the workers (HRM guide, 2009). It is the role of the internal communication department to ensure that the strategic organizational direction is passed on to all employees and followed as planned so as to guarantee the achievement of intended outcomes.
With the current developments towards globalization, knowledge availability has become more readily available and the economy has approache...
9 Pages(2250 words)Assignment
sponsored ads
Save Your Time for More Important Things
Let us write or edit the case study on your topic "Communication or marketing strategies" with a personal 20% discount.
GRAB THE BEST PAPER

Let us find you another Case Study on topic Communication or marketing strategies for FREE!