Shall I compare thee to a summer's day - Essay Example

Comments (0)
Add to wishlistDelete from wishlist
Cite this document
Summary
William Shakespeare is universally recognized as the greatest writer in the English language. His work encompasses many different themes, styles and concepts. In fact, every aspect of the human condition is portrayed in his writings. Shakespeare's sonnet 18 "Shall I compare thee to a summer's day2" (1609), praises and compares the beloved's youth and beauty to a summer's day…
Download full paperFile format: .doc, available for editing
HIDE THIS PAPERGRAB THE BEST PAPER97.9% of users find it useful 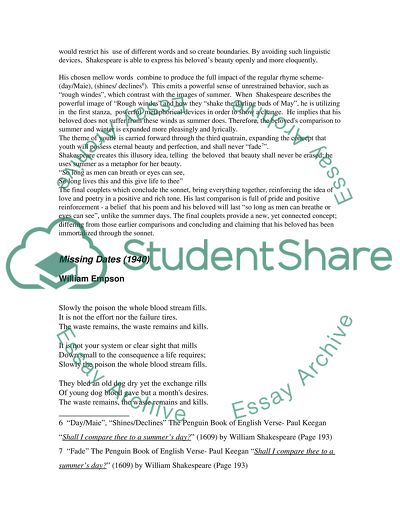 Extract of sample "Shall I compare thee to a summer's day"

“Shall I Compare Thee to a summer'S Day Essay Example | Topics and Well Written Essays - 1000 Words”, n.d. https://studentshare.org/miscellaneous/1507263-shall-i-compare-thee-to-a-summers-day.
Comments (0)
Click to create a comment or rate a document

Shall I compare thee to a summer's day, Shakespeare Analysis

Analysis - Shall I Compare Thee to a Summer's Day

... English March 26, Topic: Analysis—“Shall I compare thee to a Summer’s Day?” Introduction: A figure of speech is the style of arrangement and use of language that is distinctly different from the literal and actual meanings of words in order to convey additional meanings with dramatic or telling effects. Figures of speech say one thing in terms of something else. The difference between a figure of speech and metaphor and simile are marginal, more or less they belong to the same family. In this sonnet, “Shall I compare thee to a Summer’s day,” William Shakespeare makes use of figures of speech to convey profound meanings of love in one’s life. Love baffles definition, as each lover sees a new horizon; one may cross the moon, beat the stars...
3 Pages(750 words)Essay

Shall I Compare Thee to a Summer's Day

...William Shakespeare’s “Shall I Compare Thee to a Summers Day” is his 18th Sonnet. This is an English Sonnet or Shakespearean Sonnet. It has three quatrains with the addition of a couplet. The whole sonnet has 14 lines. Each line has 10 syllables. For example, the opening line of “Shall I compare thee to a summers day?” has 10 syllables. It can be broken down into 10 syllables “shall-I-com-pare-thee-to-a-sum-mer’s-day.” The first line is contain in a quatrain. The last line “So long lives this, and this gives life to thee” is in the couplet, but still has 10 syllables. The last line is broken down “so-long-lives-this-and-this-gives-life-to-thee.” So quatrain or couplet within “Shall I Compare Thee to a Summer’s Day” has 10 syllables...
2 Pages(500 words)Book Report/Review

Taylor was an argument on management theory was about limiting development time worked by managers. At the very primary level, studies of time comprise dismantling down every work into various parts, timing every element and making new arrangements in the most cost-effective mode of working.
Both, legal and professional responsibility are there to promote considerate and relevance of safety and health principles each and every time (Hunsaker, 2005).
Managers have responsibilities to assist attaining legal duties as stipulated in the Safety and Health work Act and to take considerate care of their own safety and health and that of any other individuals who might be affected by their omissions and acts (Hunsake...
9 Pages(2250 words)Assignment
sponsored ads
Save Your Time for More Important Things
Let us write or edit the essay on your topic "Shall I compare thee to a summer's day" with a personal 20% discount.
GRAB THE BEST PAPER

Let us find you another Essay on topic Shall I compare thee to a summer's day for FREE!