Comments (0)
Add to wishlistDelete from wishlist
Cite this document
Summary
The Sale of Goods Act provided a modicum of protection to buyers; however it was inadequate to the extent that it permitted sellers to evade their liability by incorporating exclusion clauses into their contracts (The UK Sale of Goods Act 1893). With the advent of the unfair contract terms act, there was a drastic reduction in the number of such exclusion clauses that were being incorporated into contracts of sale (Unfair Contract Terms Act (as amended on the 1st of October, 2003) 1977)…
Download full paperFile format: .doc, available for editing
HIDE THIS PAPERGRAB THE BEST PAPER98.2% of users find it useful 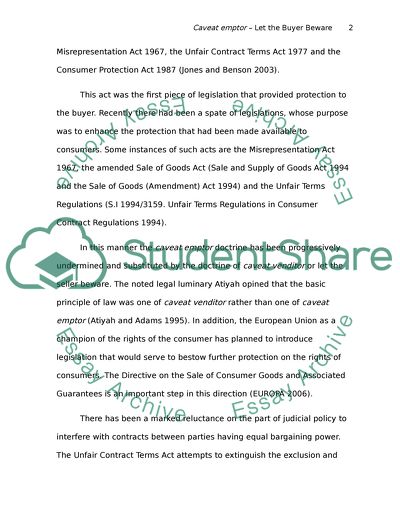 Download file to see previous pages This act is in addition to the existing law and accordingly a consumer usually has a remedy either in contract or in the tort of negligence (Slack 1997).
The term Caveat emptor connotes that let the buyer beware. It is a common law sales contract concept that exposes the buyer to the risk inherent in a transaction. Though it involves the principle of freedom to contract, nevertheless implied warranties in the context of sale of goods are latent in it (Rossini 1998)
The Sale of Goods Act 1893 was amended by several pieces of legislation, some of these are the Sale and Supply of Goods Act 1994, the Misrepresentation Act 1967, the Unfair Contract Terms Act 1977 and the Consumer Protection Act 1987 (Jones and Benson 2003).
This act was the first piece of legislation that provided protection to the buyer. Recently there had been a spate of legislations, whose purpose was to enhance the protection that had been made available to consumers. Some instances of such acts are the Misrepresentation Act 1967, the amended Sale of Goods Act (Sale and Supply of Goods Act 1994 and the Sale of Goods (Amendment) Act 1994) and the Unfair Terms Regulations (S.I 1994/3159. Unfair Terms Regulations in Consumer Contract Regulations 1994).
In this manner the caveat emptor doctrine has been progressively undermined and substituted by the doctrine of caveat venditor or let the seller beware. The noted legal luminary Atiyah opined that the basic principle of law was one of caveat venditor rather than one of caveat emptor (Atiyah and Adams 1995). In addition, the European Union as a champion of the rights of the consumer has planned to introduce legislation that would serve to bestow further protection on the rights of consumers. The Directive on the Sale of Consumer Goods and Associated Guarantees is an important step in this direction (EUROPA 2006).
There has been a marked reluctance on the part of judicial policy to interfere with contracts between parties having equal bargaining power. The Unfair Contract Terms Act attempts to extinguish the exclusion and limitation clauses that occur in consumer contracts and contracts that are based on one of the contracting parities' standard terms (Unfair Contract Terms Act (as amended on the 1st of October, 2003) 1977).
The above act is inapplicable to commercial contracts in general. In Photo Productions Limited v Securicor the House of Lords permitted Securicor to avoid liability for the acts of one of its employees (Photo Production Ltd v Securicor Transport Ltd 1980).
In the case of Slater and others v Finning Ltd, the House of Lords held that if a product failed for the reason that it had been used for a purpose other than that it had been designed for then the seller was absolved of any liability for such failure (Slater v Finning Ltd 1996). This was similar to the decision in Griffths v Peter Conway Ltd, in which the buyer had concealed from the seller as to what use was to be made of the goods (Griffths v Peter Conway Ltd 1939). This indicates very clearly that there has been a preference for caveat venditor in the context of the implied condition of suitability in commercial law.
The legal consequences of the rule of caveat emptor require the buyers to undertake ...Download file to see next pagesRead More
Share:
Tags
Cite this document
(“Caveat Emptor Is this common Law Maxim undermined Essay”, n.d.)
Retrieved from https://studentshare.org/miscellaneous/1507177-caveat-emptor-is-this-common-law-maxim-undermined

Thus, the advertisement placed by Adams in the local newspaper is an invitation to treat and not an offer, as per the case law discussed above. It is to be determined, whether Adam had formed legally binding contracts...
6 Pages(1500 words)Case Study
sponsored ads
Save Your Time for More Important Things
Let us write or edit the essay on your topic "Caveat Emptor Is this common Law Maxim undermined" with a personal 20% discount.
GRAB THE BEST PAPER

Let us find you another Essay on topic Caveat Emptor Is this common Law Maxim undermined for FREE!