Demands for Peace: France after WWI and United States after WWII - Essay Example

Comments (0)
Add to wishlistDelete from wishlist
Cite this document
Summary
World War II can never be fully assessed without looking into World War I. Wars have causes and may start only from some various causes. But war may be a continuation from another one where only an armistice was properly what was between them. This is what can characterize World War I and World War II as perceived by some historians based on events that happened.
…
Download full paperFile format: .doc, available for editing
HIDE THIS PAPERGRAB THE BEST PAPER93.8% of users find it useful 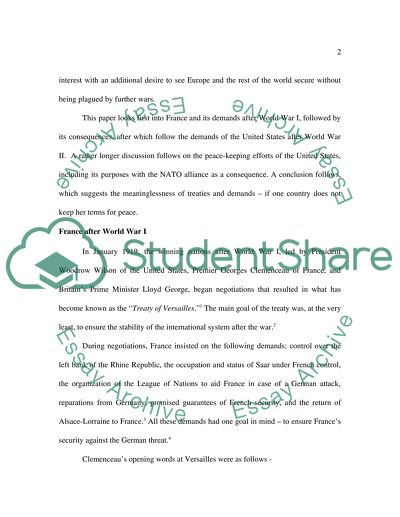 Extract of sample "Demands for Peace: France after WWI and United States after WWII"

Download file to see previous pages In the making of the Treaty of Versailles that effectively ended World War I, France chaired the peace conference and saw fit to have Germany, the one who started the war, be properly punished and the lands it confiscated be returned. Germany signed the treaty but proposed some amendments. Still, the treaty was to the consciousness of Germans a reason to have a score settled - and that came in World War II.
In a comparison between French demands after First World War and US demands after the Second World War, it is found that more of contrast lay in the altered circumstances. France acted purely on an instinct of her national survival, whereas the United States had hidden her intentions. France needed Germany to be humiliated and pay back for her foolhardiness, whereas the United States acted mainly on her self-interest with an additional desire to see Europe and the rest of the world secure without being plagued by further wars.
This paper looks first into France and its demands after World War I, followed by its consequences, after which follow the demands of the United States after World War II. A rather longer discussion follows on the peace-keeping efforts of the United States, including its purposes with the NATO alliance as a consequence. A conclusion follows, which suggests the meaninglessness of treaties and demands - if one country does not keep her terms for peace.
France after World War I
In January 1919, the winning nations after World War I, led by President Woodrow Wilson of the United States, Premier Georges Clemenceau of France, and Britain's Prime Minister Lloyd George, began negotiations that resulted in what has become known as the "Treaty of Versailles."1 The main goal of the treaty was, at the very least, to ensure the stability of the international system after the war.2
During negotiations, France insisted on the following demands: control over the left bank of the Rhine Republic, the occupation and status of Saar under French control, the organization of the League of Nations to aid France in case of a German attack, reparations from Germany, promised guarantees of French security, and the return of Alsace-Lorraine to France.3 All these demands had one goal in mind - to ensure France's security against the German threat.4
Clemenceau's opening words at Versailles were as follows -
"The greater the sanguinary catastrophe which devastated and ruined one of the richest regions of France, the more ample and more splendid should be the reparation - not merely the reparation for material acts, the ordinary reparation, if I may venture to say so, which is due to us - but the nobler and loftier reparation - we are going to try to secure, so that the peoples may at last escape from this fatal embrace, which, heaping up ruins and sorrows, terrorizes the populations and prevents them from devoting themselves freely to their work for fear of the enemies who may spring up at any moment." 5
Again in his speech at Paris Conference, on 16th June 1919, Clemenceau thundered -
"Justice, therefore, is the only possible basis for the settlement of the accounts of this terrible warJustice is what Germany shall have. But it must be justice for all. There must be justice for the dead and wounded and for those who have been orphaned and bereaved that Europe might be freed from ...Download file to see next pagesRead More
Share:
Tags
Cite this document
(“Demands for Peace: France after WWI and United States after WWII Essay”, n.d.)
Demands for Peace: France after WWI and United States after WWII Essay. Retrieved from https://studentshare.org/miscellaneous/1507161-demands-for-peace-france-after-wwi-and-united-states-after-wwii

“Demands for Peace: France After WWI and United States After WWII Essay”, n.d. https://studentshare.org/miscellaneous/1507161-demands-for-peace-france-after-wwi-and-united-states-after-wwii.
Comments (0)
Click to create a comment or rate a document

CHECK THESE SAMPLES OF Demands for Peace: France after WWI and United States after WWII

... rallying occurred in the Iraq-US war. In the same way, just as Huntington purports the dominance of the Western civilization over others in terms of their superior military power, international dominion and economic stability have made it an enviable power for the rest of the world. The author argues that the Western nations such as United States, Britain, France and Germany have developed better close international relations as they are united by the same Western civilizations and this cannot be seen among the non-Western civilizations. As a result, just as Huntington pointed out, the civilization conflict in the future is most likely to be the west versus the rest where the Islam civilization will prove to be another competent rival...
10 Pages(2500 words)Assignment

For example, for farming communities, fertile and well-watered land has been a pull factor in migration. Business opportunities and political stability are also examples of pull factors.
Since the turn of the 20th century, Great Britain and Northern Ireland have experienced a great influx of foreigners migrating into the country due to pull or push factors. There have been different waves of migrations to the United Kingdom, which has had different impacts. Because of this, the United Kingdom has had to respond in several ways, which includes coming up with new acts on immigration, nationality, and providing asylum to refugees.1 However, the topic of migration to the United Kingdom has attracted different political views and...
23 Pages(5750 words)Assignment
sponsored ads
Save Your Time for More Important Things
Let us write or edit the essay on your topic "Demands for Peace: France after WWI and United States after WWII" with a personal 20% discount.
GRAB THE BEST PAPER

Let us find you another Essay on topic Demands for Peace: France after WWI and United States after WWII for FREE!