Comments (0)
Add to wishlistDelete from wishlist
Cite this document
Summary
Evaluate TATE & LYLE international strategies and how they have managed their strategic challenges and strategic changes within this. You will in your evaluation need to consider the key factors of success in relation to the different strategic groups within food additive industry…
Download full paperFile format: .doc, available for editing
HIDE THIS PAPERGRAB THE BEST PAPER96.7% of users find it useful 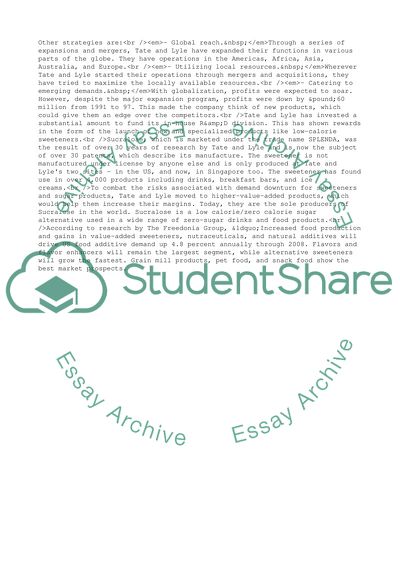 Download file to see previous pages From 1988 to 97, it grew from a Uk/European food company into one of world's largest producers of sweeteners and starches in the world.
With globalization, profits were expected to soar. However, inspite of the major expansion programme, profits were down by 60million from 1991 to 97.This made the company think of new products, which could give them an edge over the competitors.
Sucralose, which is marketed under the trade name SPLENDA, was the result of over 30 years of research by Tate and Lyle and is now the subject of over 30 patents, which describe its manufacture. The sweetener is not manufactured under license by anyone else and is only produced at Tate and Lyle's two sites - in the US, and now in Singapore too. The sweetener has found use in over 4,000 products including drinks, breakfast bars and ice creams.
To combat the risks associated with demand downturn for sweeteners and sugar products, Tate and Lyle moved to higher-value-added products, which would help them increase their margins. Today, they are the sole producers of Sucralose in the world. Sucralose is a low calorie /zero calorie sugar alternative used in a wide range of zero-sugar drinks and food products.
According to research by The Freedonia Group1 "Increased food production and gains in value-added sweeteners, nutraceuticals and natural additives will drive US food additive demand up 4.8 percent annually through 2008. Flavors and flavor enhancers will remain the largest segment, while alternative sweeteners will grow the fastest. Grain mill products, pet food and snack food show best market prospects."
Expansion in Production Capacity
To double production capacity and meet the demand of sucralose, a 42m ($75m) expansion project was completed in June 2006 in the US.
To help Tate and Lyle meet the global demand for Sucralose, another plant was opened in Jurong Island, in Singapore in April 2007.
Utilization of Local resources
The new facility at Singapore is expected to cater to the Far Eastern markets, which is predicted to be a lucrative one. Availability of skilled workers, cheap labor and tax breaks by the government are other factors, which led to the setting up of this unit in Singapore.
Key Factors of success in Food Additives Industry
Sucralose, the sweetener has been passed as fit for use in over 80 countries around the world and has been found to be more stable than Aspartame, the previously favoured sweetener for food manufacturers. Though derived from sugar, Sucralose is 600 ...Download file to see next pagesRead More
Share:
Tags
Cite this document
(“Coperate strategy Essay Example | Topics and Well Written Essays - 1500 words”, n.d.)
Coperate strategy Essay Example | Topics and Well Written Essays - 1500 words. Retrieved from https://studentshare.org/miscellaneous/1506989-coperate-strategy

CHECK THESE SAMPLES OF Coperate strategy

The first step namely the strategy formulation involves the development of the business mission, evaluation of the opportunities and threats faced by the business organization in the business, by using tools such as SWOT analysis, examining the s...

Education, profession, geographic location and parental status are some of the dimensions which influence the perspectives and identities of people; this is the basic interpretation of diversity. Using diversity as a concept, it includes everyone. In several ways, the initiatives of diversity match the compliance programs of non-discrimination through crafting an environment for the workplace and promoting an organizational culture that allows for such differences. Diversity is also about dignity and respect for all, about learning from others who are not similar to us, and about building environments and practices for the workplace which will encourage learning from others and being able to grasp the benefits of this diversity (H...
11 Pages(2750 words)Case Study

Let us find you another Essay on topic Coperate strategy for FREE!