Comments (0)
Add to wishlistDelete from wishlist
Cite this document
Summary
At an early age, it dawned on me that people build strong relationships through the usage of good and effective communication techniques that varies from person to person. When I was young, I am confused why I often argue with my older sister while I maintain good relationship with my friends…
Download full paperFile format: .doc, available for editing
HIDE THIS PAPERGRAB THE BEST PAPER95.9% of users find it useful 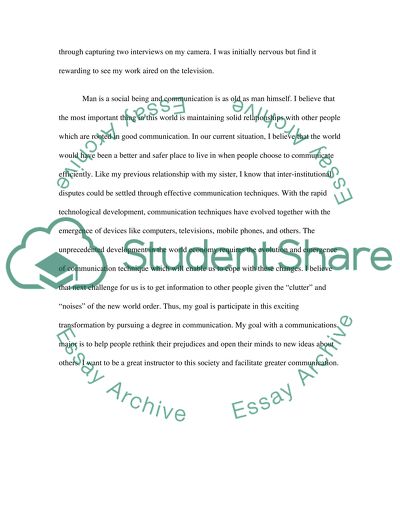 At an early age, it dawned on me that people build strong relationships through the usage of good and effective communication techniques that varies from person to person. When I was young, I am confused why I often argue with my older sister while I maintain good relationship with my friends. Recognizing that it might be on how I communicate with her, I started to converse with her like I do with my friends but it still did not work out. I have always thought that the bickering were due to lack of communication but well in fact, it is because of miscommunication. When we grow older, I have learned to tailor my conversation with her according to her preferences and made her understand my ideas through elaboration. Through this openness to new communication techniques anchored in responding according to my sister's requirements, I was able to build a harmonious relationship.
My experience in studying sign language strengthened my determination to choose communication as a major. Sign language classes exposed me to the hardships and needs of people who are disabled. I used to pity them knowing that they do not have avenue where they can truly express themselves. However, it also challenged me to make a difference in communication as I am able and free to communicate my ideas.
When I was young, I have developed an interest in communication through mass media especially during the nights when I watch documentaries with my father. It opened my eyes on social issues which typical people ignore. Having the chance to explore this field, I choose to become an intern at a Korean news station (KEMS) within the past six months. My first assignment was to report on the animal festival' in downtown San Jose through capturing two interviews on my camera. I was initially nervous but find it rewarding to see my work aired on the television.
Man is a social being and communication is as old as man himself. I believe that the most important thing in this world is maintaining solid relationships with other people which are rooted in good communication. In our current situation, I believe that the world would have been a better and safer place to live in when people choose to communicate efficiently. Like my previous relationship with my sister, I know that inter-institutional disputes could be settled through effective communication techniques. With the rapid technological development, communication techniques have evolved together with the emergence of devices like computers, televisions, mobile phones, and others. The unprecedented development in the world economy requires the evolution and emergence of communication technique which will enable us to cope with these changes. I believe that next challenge for us is to get information to other people given the "clutter" and "noises" of the new world order. Thus, my goal is participate in this exciting transformation by pursuing a degree in communication. My goal with a communications major is to help people rethink their prejudices and open their minds to new ideas about others. I want to be a great instructor to this society and facilitate greater communication. Read More
Share:
Tags
Cite this document
(“Communication Techniques Personal Statement Example | Topics and Well Written Essays - 500 words”, n.d.)
Retrieved from https://studentshare.org/miscellaneous/1506830-communication-techniques

CHECK THESE SAMPLES OF Communication Techniques

Communication is part of everyday life. It is not limited to adults or learned individuals. Babies communicate with their mothers as they cry when they are hungry, the mute use sign language to express what they want to say, while the mentally disabled laugh when they are happy or excited. The forms of communication people use may vary but common elements are usually present. These include the message and the communicators or the participants who play the role of either the sender or receiver of the message. In the communication situation, I had with my friend, these common features were present along with others namely, feedback, noise, context, and mutual agreement/negotiation. These elements affected the outcome of the conversa...
12 Pages(3000 words)Case Study
sponsored ads
Save Your Time for More Important Things
Let us write or edit the personal statement on your topic "Communication Techniques" with a personal 20% discount.
GRAB THE BEST PAPER

Let us find you another Personal Statement on topic Communication Techniques for FREE!