Comments (0)
Add to wishlistDelete from wishlist
Cite this document
Summary
The successful leadership of Siangua Highschool arises from transformational leadership. Cherry briefly explains that, "Transformational theories focus upon connections formed between leaders and followers. These leaders motivate and inspire people by helping group members see the importance and higher good of the task…
Download full paperFile format: .doc, available for editing
HIDE THIS PAPERGRAB THE BEST PAPER96.3% of users find it useful 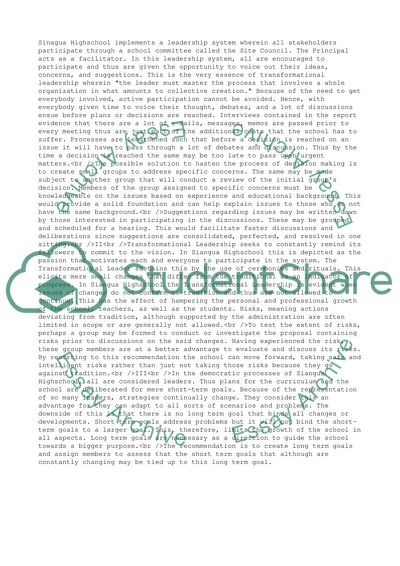 Limits of Transformational Leadership in Sianguna Highschool The successful leadership of Siangua Highschool arises from transformational leadership. Cherry briefly explains that, "Transformational theories focus upon connections formed between leaders and followers. These leaders motivate and inspire people by helping group members see the importance and higher good of the task. Transformation leaders are focused on the performance of group members, but also want each person to fulfill his or her potential." The study showed the ideal transformational leadership at work but fails to mention its disadvantages. The study did not tackle nor show problems or issues arising from the following issues of:
I. Absolute democracy in decision making breeds long tedious processes and deliberations leading to a slow determination or resolution of problems
II. Adherence to the traditional breeds complacency and resistance to change.
III. Preference to short term goals limits growth and hampers progressive direction.
All these issues arose from the causal factors as analyzed below and its consequent recommendation follows.
I
Siangua Highschool implements a leadership system wherein the all stakeholders participate through a school committee called the Site Council. The Principal acts as a facilitator. In this leadership system all are encouraged to participate and thus are given the opportunity to voice out their ideas, concerns and suggestions. This is the very essence of transformational leadership wherein "the leader must master the process that involves a whole organization in what amounts to a collective creation." Because of the need to get everybody involved, active participation cannot be avoided. Hence, with everybody given time to voice their thought, debates, and a lot of discussions ensue before plans or decisions are reached. Interviews contained in the report evidences that there are a lot of e-mails, messages, memos are passed prior to every meeting thus are just part of the additional costs that the school has to suffer. Processes are lengthened such that before a decision is reached on an issue it will have to pass through a lot of debates and discussion. Thus by the time a decision is reached the same may be too late to pass upon urgent matters.
The possible solution to hasten the process of decision making is to create small groups to address specific concerns. The same may be made subject to another group that will conduct a review of the initial group's decision. Members of the group assigned to specific concerns must be knowledgeable on the issues based on experience and educational background. This would provide a solid foundation and can help explain issues to those who do not have the same background.
Suggestions regarding issues may be written down by those interested in participating in the discussions. These may be grouped and scheduled for hearing. This would facilitate faster discussions and deliberations since suggestions are consolidated, perfected and resolved in one sitting.
II
Transformational Leadership seeks to constantly remind its followers to commit to the vision. In Siangua Highschool this is depicted as the passion that motivates each and everyone to participate in the system. The Transformational Leader sustains this by the use of ceremonies and rituals. This elicits mere small changes that differ from the traditional as an indicator of progress. In Siangua Highschool the Transformational Leadership is evident when issues of changes do not conform to tradition and thus are not allowed to continue. This has the effect of hampering the personal and professional growth of the school, teachers, as well as the students. Risks, meaning actions deviating from tradition, although supported by the administration are often limited in scope or are generally not allowed.
To test the extent of risks, perhaps a group may be formed to conduct or investigate on the proposal containing risks prior to discussions on the said changes. Having experience the risk, these group members are at a better advantage to evaluate and discuss its risks. By resorting to this recommendation the school can move forward, taking safe and intelligent risks rather than just not taking those risks because they go against tradition.
III
In the democratic processes of Siangua Highschool, all are considered leaders. Thus plans for the curriculum and the school are deliberated for mere short term goals. Because of the representation of so many leaders, strategies continually change. They consider this as an advantage for they can adapt to all sorts of scenarios and problems. The downside of this is that there is no long term goal that binds all changes or developments. Short term goals addresses problems but it will not bind the short-term goals a larger goal. This therefore limits the growth of the school in all aspects. Long term goals are necessary as a direction to guide the school towards a bigger purpose.
The recommendation is to create long term goals and assign members to assess that the short term goals that although are constantly changing may be tied up to this long term goal.
Sources:
Cherry, K. Leadership Theories - 8 Major Leadership Theories retrieved on 4/4/10 at http://psychology.about.com/od/leadership/p/leadtheories.htm
Class lectures on Transformational Leadership Read More
Share:
Tags
Cite this document
(“Transformational Leadership in Sianguna Highschool Case Study”, n.d.)
Transformational Leadership in Sianguna Highschool Case Study. Retrieved from https://studentshare.org/miscellaneous/1506661-transformational-leadership-in-sianguna-highschool

CHECK THESE SAMPLES OF Transformational Leadership in Sianguna Highschool

...﻿Transformational leadership Introduction Leadership has been around for many decades and can be traced from the native human beings. Though leadership being around for many years, not one proper definition of the term has been developed many scholars have attributed the lack of a proper definition of leadership to the constant and dynamic change. This always gives it a different look every time a review of the term is done. Leadership by its self is a complex concept with a multiple application and uses that are based on the context of the situation at hand. Various leadership theories have been developed and one of these theories is transformational or charismatic leadership. Transformational leadership can be defined as in two different...
10 Pages(2500 words)Assignment

...?Executive summary The success of any given organisation is mainly tied to the leadership styles implemented by the leaders. From this assertion, this paper has been designed to give insight into what leadership is as well as to evaluate different types of leadership styles. Various authors have suggested that different theories in leadership such as trait theories, behavioural as well as contingency theories have been developed to explain the impact of leadership styles on the performance of the organisation as a whole. However, recent studies have shown that transformational leadership is more ideal during the contemporary period since it is adaptive to change. Organisations operate in a dynamic environment and they ought to keep pace...
8 Pages(2000 words)Essay

...﻿Transformational Leadership The nature and definition of effective leadership has been a source of discussion for centuries. Everyone from Sun Tzu and Machiavelli to P.T. Barnum and Donald Trump have weighed in on the subject. Theories on what makes an effective leader are almost as diverse as the types of leaders that exist. After careful examination, I have realized that the style that best illustrates my personal leadership philosophy is Transformational Leadership. An excellent fictional example of a Transformational leader is Sergeant Apone, better known simply as Sarge, from the film Aliens. He is the first one out of stasis with his feet on the floor, a stogie in his mouth, and a smile on his face, crowing, “All right...
3 Pages(750 words)Research Paper

...Transformational Leadership Total Number of Words: 325 Q What are the key attributes of the transformational style of leadership? Transformationalleadership style is composed of four components known as: (1) charisma or idealized influence, (2) inspirational motivation, (3) intellectual stimulation, and (4) individual consideration (Bass, 1998; Bass & Avolio, 1993). For this reason, transformational leaders are considered as optimistic individuals who are capable of creating a collective vision, ability to communicate organizational vision, and inspire a group of diverse employees to support the vision (Epitropaki, 2001). According to Palmer et al. (2001), charisma is highly correlated to a person’s ability to monitor their own emotions...
1 Pages(250 words)Assignment

... Transformational Leadership Leadership is a process through which an individual influences the conduct of a person, or group of people in order to achieve a certain set goal. Leadership is defined differently depending on the school of thought adopted (Northouse 2001, p.14). Study of leadership over the years has yielded many leadership theories involving function, traits, behaviour, situational interaction, values, vision, intelligence, charisma and power amongst others. Amongst many theories that have developed on leadership are transactional and transformational leadership theories that were developed by Bernard Bass and colleagues (Tichy and Devanna 2008, p. 38). The transactional leadership theory involves exchange between labour...
8 Pages(2000 words)Essay

...﻿ Transformational LeadershipTransformational leadership involves identifying the need for change and providing the required inspiration to members to actualize that change. A transformational leader has a definite vision for the team members. Paul had a vision for the people in the court on that day he stood to defend himself. He stated that his desire was that "all who are listening to me today may become what I am" (Acts 26:29, New International Version). However, the leader ought to clearly articulate his vision to his to the people. Paul demonstrates excellent communications skills at the court. He starts by motioning his hand as he begins his defense despite being chained. This gesture calls for the attention to what he wants...
1 Pages(250 words)Assignment

...﻿ Leadership and management styles have experienced numerous changes over time. Gone are the days when leaders were completely autocrats and their say was final. Gone are the days when leaders were considered to be more superior to their subjects. Leaders are followed by people whereas managers have people who work under them. The two terms might have different meanings, but they go hand in hand. Every field of life requires leaders for a well-structured movement of the daily activities. The vital aim of this paper is to give an in-depth meaning of leadership and management styles in the field of nursing. My personal leadership style Transformational leadership style is the kind...
8 Pages(2000 words)Essay

Although the leadership paradigm is generally missing from the academic literature, serv...

10 Pages(2500 words)Capstone Project
sponsored ads
Save Your Time for More Important Things
Let us write or edit the case study on your topic "Transformational Leadership in Sianguna Highschool" with a personal 20% discount.
GRAB THE BEST PAPER

Let us find you another Case Study on topic Transformational Leadership in Sianguna Highschool for FREE!