Comments (0)
Add to wishlistDelete from wishlist
Cite this document
Summary
A research is not about information but about acquiring the right insight without compromising on integrity, to draw appropriate conclusions and initiate necessary actions. The following report provides an overview of the overall research framework, how data protection issues could possibly affect research activity and the extent it can affect the final report, subject to the fact that other elements of research are well established in the process…
Download full paperFile format: .doc, available for editing
HIDE THIS PAPERGRAB THE BEST PAPER91.7% of users find it useful 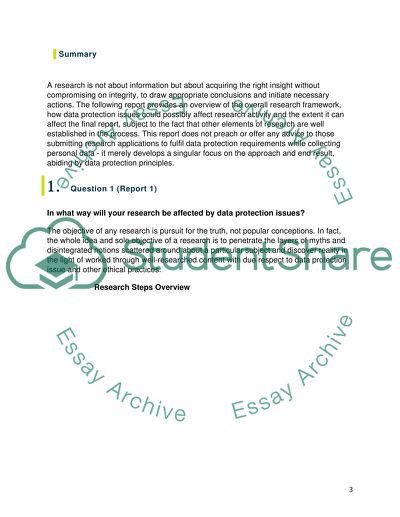 Download file to see previous pages The objective of any research is pursuit for the truth, not popular conceptions. In fact, the whole idea and sole objective of a research is to penetrate the layers of myths and disintegrated notions scattered around about a particular subject and discover reality in the light of worked through well-researched content with due respect to data protection issue and other ethical practices.
For a brief period, let us go ahead with a key assumption that one is free to take up a research assignment, bearing in mind that there is no data protection concepts involved in the exercise and all laws related to data privacy is temporarily abolished. Can we identify the steps in the pyramid above where research activity will be accelerated or hindered due to that relaxation While the readers are allowed some time to contemplate on that possibility, let us dwell on other relevant sources and strategies to gather data and briefly understand the impact of data protection, right from the bottom level in the pyramid.
While most researchers are aware of the thin difference between methods and methodologies, reliability and validity of information, appropriate analysis and evaluation of data, data protection and ethical practices, results and conclusion - it is the their responsibility to ensure that the broader objective is not diluted in the multiple steps involved in research nor there is any compromise in the entire cycle.
A general awareness of data protection needs in all spheres of life - beyond Universities, Corporate, Financial Institutions or wherever - will not only lead a researcher to have a better understanding about the hazards of not protecting data but also prepare him to value that aspect outside the premises of the current project. Once a researcher learns to appreciate data protection principles beyond definition, Act and Law, implementing good practice will be just as important as the authenticity of the report generated, by the end of the research.
Identifying Scope of Research/ Problem
Quoting an old proverb by Aristotle - "Well begun is half done". It is potentially important to acknowledge, that to obtain desired and realistic results of a research assignment, there is a definite need to have a defined framework. This might not necessarily be a tested or proven approach, however considering the complexity and magnitude of a research, the initial framework to drive all steps in an innovative manner has to be efficiently designed. It is the design that determines the strength of an analysis. There is one thing the researcher needs to have prior to working on the design - A problem.
While some researchers are very clear about their needs for information when working towards their thesis or study project, some are quite confused and require information on what studies, topics and papers are available, on specific work in their particular zone of interest. They also might need advice on their proposal and an idea of how effective their findings would be. Some might even need an elaborate discussion on the overall framework and data sourcing. The ...Download file to see next pagesRead More
Share:
Tags
Cite this document
(“Two Reports about Research Essay Example | Topics and Well Written Essays - 2000 words”, n.d.)
Two Reports about Research Essay Example | Topics and Well Written Essays - 2000 words. Retrieved from https://studentshare.org/miscellaneous/1506620-two-reports-about-research

CHECK THESE SAMPLES OF Two Reports about Research

It was in the 1990s that the world began to hear serious warnings on global warming and climate change. The summary for policymakers prepared as part of the first assessment report by the Intergovernmental Panel on Climate Change was the first-ever in-depth study on this topic (Houghton, Jenkins and Ephirams, 1990). This report explored climate change and stumbled upon revolutionary revelations. This study announced in very clear terms that there is a natur...
6 Pages(1500 words)Literature review
sponsored ads
Save Your Time for More Important Things
Let us write or edit the essay on your topic "Two Reports about Research" with a personal 20% discount.
GRAB THE BEST PAPER

Let us find you another Essay on topic Two Reports about Research for FREE!