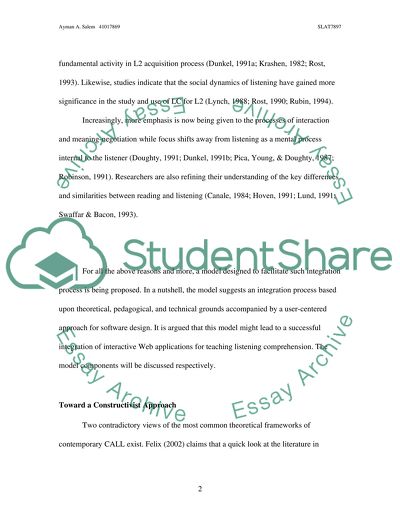 Download file to see previous pages The significance of investigating this integration remains, however, considering that listening now is the cornerstone of language acquisition (Krashen et al., 1994) and a fundamental activity in L2 acquisition process (Dunkel, 1991a; Krashen, 1982; Rost, 1993). Likewise, studies indicate that the social dynamics of listening have gained more significance in the study and use of LC for L2 (Lynch, 1988; Rost, 1990; Rubin, 1994).
Increasingly, more emphasis is now being given to the processes of interaction and meaning-negotiation while focus shifts away from listening as a mental process internal to the listener (Doughty, 1991; Dunkel, 1991b; Pica, Young, & Doughty, 1987; Robinson, 1991). Researchers are also refining their understanding of the key differences and similarities between reading and listening (Canale, 1984; Hoven, 1991; Lund, 1991; Swaffar & Bacon, 1993).
For all the above reasons and more, a model designed to facilitate such integration process is being proposed. In a nutshell, the model suggests an integration process based upon theoretical, pedagogical, and technical grounds accompanied by a user-centered approach for software design. It is argued that this model might lead to a successful integration of interactive Web applications for teaching listening comprehension. The model components will be discussed respectively.
Toward a Constructivist Approach
Two contradictory views of the most common theoretical frameworks of contemporary CALL exist. Felix (2002) claims that a quick look at the literature in language learning and technology will reveal that there is a move away from the static transmission models of knowledge and skill acquisition, which are instructivist vs. constructivist, tending towards more contextualized, authentic, and meaningful tasks in language learning. These three characteristics are underscored in three recent approaches in language learning and technology: the collaborative learning approach, the problem solving approach, and the constructivist approach. This study will adopt the definition of constructivism which believes that human knowledge is constructed and learners construct their own experience and understanding through assimilating current experience with previous internalized knowledge. Moreover, learning is seen as a collaborative, autonomous, socially negotiated process, which takes place when supported by a rich environment (Ruschoff & Ritter, 2001).
Pachler (2002), however, claims that traditional behaviorist modes, which I believe depends partly on transmission models (i.e., repetition in listening/speaking), are still very common in the world of CALL. The breaking of learning tasks into small manageable steps to drill and ...Download file to see next pagesRead More
Share:
Tags
Cite this document
(“Integrating Interactive Multimedia and Web Applications in Teaching Essay”, n.d.)
Integrating Interactive Multimedia and Web Applications in Teaching Essay. Retrieved from https://studentshare.org/miscellaneous/1506509-integrating-interactive-multimedia-and-web-applications-in-teaching

... assignment is due: Interactive Multimedia Multimedia environment is used to construct a presentation system by the introduction of interaction features. Interactive multimedia addresses how the innovation in the computer world impacts positively on various areas including the education system and in the entertainment scene (Roca and Rousseau 242). It uses the content type that includes audio, text, images, video and animation. It involves the ideas of interactivity, interaction design, the interaction between people and computers, digital culture and cyber culture. The cases involved include video games, interactive television and advertising, video games and algorithmic art. The most distinct feature of multimedia interaction...
2 Pages(500 words)Assignment

What Is Multigrade Teaching

Although multigrade teaching is most associated with developing countries, the use of this type of system is not limited to Africa and the Caribbean. “Multigrade classes, in which teachers work with more than one curriculum grade at the same time, are widespread in developing countries. They are also surprisingly common in industrialized countries. Yet the needs of learners and teachers in multigrade classes remain invisible to those who plan, design and fund education centrally” (O’Toole, 2006). There are several reasons why districts may choose to utilize the multigrade system, sometimes out of necessity and sometimes as a deliberate choice, just as there are several ways in which the system can be organized. I...
7 Pages(1750 words)Essay

The Role of Web Services in E-Commerce

Web services share business logic, data, and processes through a programmatic interface across a network (Kaye, 2003).

This becomes a platform for business that takes place across the internet in ways that were previously unimagined. E-commerce is much like regular commerce except that the markets have expanded and the competition has become global instead of local or even regional. Web services allow people from across the world to engage in business and the few barriers which remain for truly global commerce are being removed with automated language translators and website optimization techniques that allow users from different locations to view the web as they prefer to view it. All of these developments are takin...

“Language occurs through an interaction among genes (which hold innate tendencies to communicate and be sociable), environment, and the child’s own thinking abilities” (Genishi, 2006). But just how does this happen? How do children learn to use sounds to communicate and then to place those sounds in the correct order to make themselves understood? While some of this behavior can be attributed to the imitation of the caregivers, there remain aspects to the development of language and communication that cannot be so easily explained. To provide a more complete understanding of how language and communication develop in the young child, it is necessary to understand not only the primary terms that are applied, but al...
12 Pages(3000 words)Case Study
sponsored ads
Save Your Time for More Important Things
Let us write or edit the essay on your topic "Integrating Interactive Multimedia and Web Applications in Teaching" with a personal 20% discount.
GRAB THE BEST PAPER

Let us find you another Essay on topic Integrating Interactive Multimedia and Web Applications in Teaching for FREE!