Prevalence and Effects of Bullying in Public Schools - Essay Example

Comments (0)
Add to wishlistDelete from wishlist
Cite this document
Summary
Bullying has been in existent in our school system for a long time. This is a problem that the society cannot really deny its existence. There is need for measures to be put in place to deal with this problem. Bullying is present in all school systems in America, but it is disproportionately higher in public schools…
Download full paperFile format: .doc, available for editing
HIDE THIS PAPERGRAB THE BEST PAPER92.3% of users find it useful 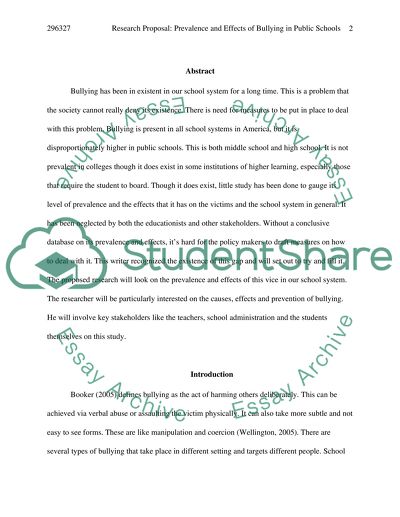 Extract of sample "Prevalence and Effects of Bullying in Public Schools"

Download file to see previous pages It has been neglected by both the educationists and other stakeholders. Without a conclusive database on its prevalence and effects, it's hard for the policy makers to draft measures on how to deal with it. This writer recognized the existence of this gap and will set out to try and fill it. The proposed research will look on the prevalence and effects of this vice in our school system. The researcher will be particularly interested on the causes, effects and prevention of bullying. He will involve key stakeholders like the teachers, school administration and the students themselves on this study.
Booker (2005) defines bullying as the act of harming others deliberately. This can be achieved via verbal abuse or assaulting the victim physically. It can also take more subtle and not easy to see forms. These are like manipulation and coercion (Wellington, 2005). There are several types of bullying that take place in different setting and targets different people. School bullying is such one form. It takes place in an educational institution. It can occur either in or outside the institution. Bullying is not a one time affair. It is often carried out systematically over a long period of time (Wellington, 2004). The few studies that have been conducted on school bullying have brought out several factors. They have shown that it is prevalent and causes long term or short term effects to the victims. It is also true that the perpetrators have been found to be suffering from some emotional and psychological imbalance. It is important therefore to look at the prevalence and effects of this phenomenon deeply. This can only be done by conducting researches on its causes and how it can be prevented or mitigated.
Problem Statement
Kendall (2006) is of the opinion that problem statement section of a research proposal must have certain elements. It should clearly state the problem that the researcher is interested in. it should also put forward the variables that the researcher wants to study and how they are related to one another. This study will address the issue of school bullying in middle and high schools. The variables will be as follows:
School bullying has far reaching effects to the victim and other people in the society
Bullies do share some common traits
School bullying does target some students than it does others
School bullying can be stopped or mitigated
Background to the Problem
The writer here has to show the importance of the problem that he is embarking on. He has to show other people who have worked on the problem before (Kendall, 2006). The findings and methods used by these people have to be clearly elaborated. In 2001, the United States Center for Disease Control conducted one of the few studies that have been published on school bullying (booker, 2005). It found that at least fifteen percent of middle and high school students in America have been victims. The victims were found to have problems coping with the school environment and in learning. They suffered from psychological and emotional problems as a result of this. Boys are targeted more than girls (Wellington, 2004). This may be because of the reason that majority of the ...Download file to see next pagesRead More
Share:
Tags
Cite this document
(“Prevalence and Effects of Bullying in Public Schools Essay”, n.d.)
Prevalence and Effects of Bullying in Public Schools Essay. Retrieved from https://studentshare.org/miscellaneous/1506491-prevalence-and-effects-of-bullying-in-public-schools

“Prevalence and Effects of Bullying in Public Schools Essay”, n.d. https://studentshare.org/miscellaneous/1506491-prevalence-and-effects-of-bullying-in-public-schools.
Comments (0)
Click to create a comment or rate a document

... in order to counter the influence of gangs. The most prominent questions then seem to be whether private or public schools are more effective in reducing crime? A research into the US problem of juvenile delinquency has important findings and hypotheses. The most common cause of delinquency related to schooling is due to teacher-student conflicts. Labels which are placed onto children confining them usually result in bitterness and frustration, leading to inappropriate behaviour. Resultantly this can be solved if there is a choir available is schooling and institutions. More choices would also entail the availability of private schooling. And it becomes a given that interschool competition requires schools to keep discipline in check...
6 Pages(1500 words)Research Proposal
sponsored ads
Save Your Time for More Important Things
Let us write or edit the essay on your topic "Prevalence and Effects of Bullying in Public Schools" with a personal 20% discount.
GRAB THE BEST PAPER

Let us find you another Essay on topic Prevalence and Effects of Bullying in Public Schools for FREE!