Comments (0)
Add to wishlistDelete from wishlist
Cite this document
Summary
Juvenile delinquency cases are growing abound and becoming serious threat in society. Reported in the BBC News (2007) that juvenile delinquency in China is rapidly rising and becoming serious problem in the country, not to mention other parts of the globe including those countries that are more deprived than China.
…
Download full paperFile format: .doc, available for editing
HIDE THIS PAPERGRAB THE BEST PAPER92.7% of users find it useful 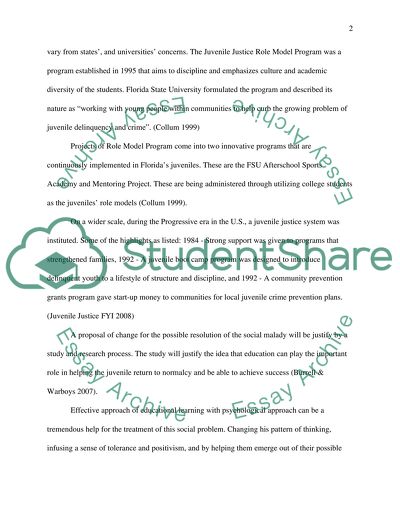 Juvenile Delinquency Justice Program Juvenile delinquency cases are growing abound and becoming serious threat in society. Reported in the BBC News (2007) that juvenile delinquency in China is rapidly rising and becoming serious problem in the country, not to mention other parts of the globe including those countries that are more deprived than China.
Even in a first world country such as the United States of America dealing with massive juvenile delinquency problem. The serious social issue is a growing one especially in some states where delinquency is rampant (Leighninger & Popple 1996).
A statistical data stated that an estimated 2.5 million juveniles were arrested by law enforcement officers with delinquency in 1999, according to the PBS Frontline's online statistic for Juvenile Justice Report (2008). It is stated in there that " in 1998, for every 100,000 youth in the United States ages 10 through 17, there were 1,751 arrests of juveniles for property offenses". (Frontline: Juvenile Justice 2008)
The problem rooted from some cited causal factors. One is the loose responsibility of the educators of the proper education designed for minors. Research shows that there are 70% of juvenile delinquent was caused by educational disabilities (Wright & Wright 2007).
The ineffectiveness of the educational system in a certain community is comparable to non-educational system at all. The knowledge and awareness in society and morality that children should learned are not being effectively conveyed to them, thus the possibility to create socially-insensitive individual is in its highest possibility (Diekmann 2004).
There are previous programs being implemented for the juvenile justice system to help resolve the social malady. In the United States, designed programs for juvenile justice system vary from states', and universities' concerns. The Juvenile Justice Role Model Program was a program established in 1995 that aims to discipline and emphasizes culture and academic diversity of the students. Florida State University formulated the program and described its nature as "working with young people within communities to help curb the growing problem of juvenile delinquency and crime". (Collum 1999)
Projects of Role Model Program come into two innovative programs that are continuously implemented in Florida's juveniles. These are the FSU Afterschool Sports Academy and Mentoring Project. These are being administered through utilizing college students as the juveniles' role models (Collum 1999).
On a wider scale, during the Progressive era in the U.S., a juvenile justice system was instituted. Some of the highlights as listed: 1984 - Strong support was given to programs that strengthened families, 1992 - A juvenile boot camp program was designed to introduce delinquent youth to a lifestyle of structure and discipline, and 1992 - A community prevention grants program gave start-up money to communities for local juvenile crime prevention plans. (Juvenile Justice FYI 2008)
A proposal of change for the possible resolution of the social malady will be justify by a study and research process. The study will justify the idea that education can play the important role in helping the juvenile return to normalcy and be able to achieve success (Burrell & Warboys 2007).
Effective approach of educational learning with psychological approach can be a tremendous help for the treatment of this social problem. Changing his pattern of thinking, infusing a sense of tolerance and positivism, and by helping them emerge out of their possible criminal mindset that were induced by them by several causal factors will be the proposed elucidation (Brock Burrell & Tulipano 2006).

“Visions in Conflict” has a threefold purpose. The first of these is to express much of the good work being done in the field of conflict resolution and peacebuilding around the world. This is especially relevant in the areas of acknowledgment and understanding of the “other” (including interfaith dialogue); communication through conflict and forgiveness. Second, this compilation aims to open up the field in ord...

13 Pages(3250 words)Assignment
sponsored ads
Save Your Time for More Important Things
Let us write or edit the essay on your topic "Research Program Proposal" with a personal 20% discount.
GRAB THE BEST PAPER

Let us find you another Essay on topic Research Program Proposal for FREE!