Comments (0)
Add to wishlistDelete from wishlist
Cite this document
Summary
Introduction: The environment is a major influence on a person's overall functioning. Because of this, it is critical for a care provider to have an understanding of how the internal as well as external environments impact a person's everyday life. The environment consists of both an internal and external environment that continuously interface with each other…
Download full paperFile format: .doc, available for editing
HIDE THIS PAPERGRAB THE BEST PAPER92.7% of users find it useful 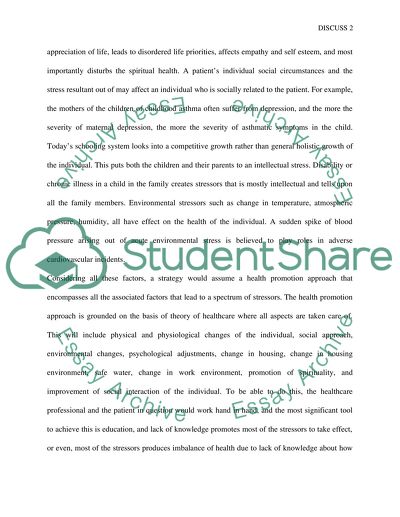 Discuss the Physical, Psychological, Spiritual, Social, Intellectual and Environmental Stressors that Impact Health. Provide Strategies to Minimize them to Achieve a Healthy Balanced Life
Introduction: The environment is a major influence on a person's overall functioning. Because of this, it is critical for a care provider to have an understanding of how the internal as well as external environments impact a person's everyday life. The environment consists of both an internal and external environment that continuously interface with each other. People's internal environment include their ideas, biological makeup, emotions, and the psychosocial elements that influence them. In this discussion, a brief review of those factors and a strategy planning would be done. Health is not only a state of physical functioning; rather health is a concept that encompasses the total functioning of a person. Health refers to the ability of the person to function effectively, physically, socially, psychologically, spiritually, and intellectually.
Effective physical functioning refers to the ability of the body structures to change and adapt to the changing environment. To different levels of physical stress, the body responds in all parameters of physiological functions, such as, heart rate, neural function, musculoskeletal function and others. The physical stressors may be of many categories. Of them, most important are muscular exercises, ambient temperature, and sound levels at work. The psychological stressors may be economic condition, housing condition, and family environment. The psychological stressors at work also influence individual's health status. Psychological stressors suppress cardiac parasympathetic nervous system activity leading to heart rate variability and eventually cardiovascular disease. Serious disease and treatment experiences affect the psychological, interpersonal, and spiritual wellbeing. It should be mentioned that this might yield both negative and positive outcomes. This affects interpersonal relationships, reduces appreciation of life, leads to disordered life priorities, affects empathy and self esteem, and most importantly disturbs the spiritual health. A patient's individual social circumstances and the stress resultant out of may affect an individual who is socially related to the patient. For example, the mothers of the children of childhood asthma often suffer from depression, and the more the severity of maternal depression, the more the severity of asthmatic symptoms in the child. Today's schooling system looks into a competitive growth rather than general holistic growth of the individual. This puts both the children and their parents to an intellectual stress. Disability or chronic illness in a child in the family creates stressors that is mostly intellectual and tells upon all the family members. Environmental stressors such as change in temperature, atmospheric pressure, humidity, all have effect on the health of the individual. A sudden spike of blood pressure arising out of acute environmental stress is believed to play roles in adverse cardiovascular incidents.
Considering all these factors, a strategy would assume a health promotion approach that encompasses all the associated factors that lead to a spectrum of stressors. The health promotion approach is grounded on the basis of theory of healthcare where all aspects are taken care of. This will include physical and physiological changes of the individual, social approach, environmental changes, psychological adjustments, change in housing, change in housing environment, safe water, change in work environment, promotion of spirituality, and improvement of social interaction of the individual. To be able to do this, the healthcare professional and the patient in question would work hand in hand, and the most significant tool to achieve this is education, and lack of knowledge promotes most of the stressors to take effect, or even, most of the stressors produces imbalance of health due to lack of knowledge about how it produces a health status that is unacceptable. The health promotion approach that involves understanding about these factors would restore balance when both the promoter and the promotee are not ignorant about these factors and they both welcome changes and adjustments that produce health.
Reference
Anderson, E.T. and McFarlane, J.M., Community as Partner: Theory and Practice in Nursing. Lippincott Williams & Wilkins, 2006. Read More
Share:
Tags
Cite this document
(“Health Impact Essay Example | Topics and Well Written Essays - 500 words”, n.d.)
Health Impact Essay Example | Topics and Well Written Essays - 500 words. Retrieved from https://studentshare.org/miscellaneous/1506324-health-impact

CHECK THESE SAMPLES OF Health Impact

...Assess the likely health impacts of the increased use of groundwaters in People's Republic of China - identify key geogenic and anthropogenic contaminants. By Alok Mohan ABSTRACT Pollution is another huge problem contributing to the larger crisis at hand. Over half of China's population, about 700 million people and 11 percent of the world's, only have access to drinking water of a quality below World Health Organization standards (WHO). The water is contaminated by a combination of industrial pollution and human and animal waste. Arsenic (As) is widely known for its adverse effects on human health, affecting millions of people around the world. In Asia the consumption of groundwater (through wells) in an attempt to replace polluted...
13 Pages(3250 words)Case Study

For example, for farming communities, fertile and well-watered land has been a pull factor in migration. Business opportunities and political stability are also examples of pull factors.
Since the turn of the 20th century, Great Britain and Northern Ireland have experienced a great influx of foreigners migrating into the country due to pull or push factors. There have been different waves of migrations to the United Kingdom, which has had different impacts. Because of this, the United Kingdom has had to respond in several ways, which includes coming up with new acts on immigration, nationality, and providing asylum to refugees.1 However, the topic of migration to the United Kingdom has attracted different political views and...
23 Pages(5750 words)Assignment
sponsored ads
Save Your Time for More Important Things
Let us write or edit the essay on your topic "Health Impact" with a personal 20% discount.
GRAB THE BEST PAPER

Let us find you another Essay on topic Health Impact for FREE!