Comments (0)
Add to wishlistDelete from wishlist
Cite this document
Summary
Economics, in the simplest sense, can be defined as the "social science which studies human choice behavior and how it affects the production, distribution, and consumption of scarce resources" (Economics 1). Economics is the branch of science which takes an in-depth look at the how individuals satisfy their unlimited needs and wants through choices, incentives, and allocation of scarce resources…
Download full paperFile format: .doc, available for editing
HIDE THIS PAPERGRAB THE BEST PAPER97.6% of users find it useful 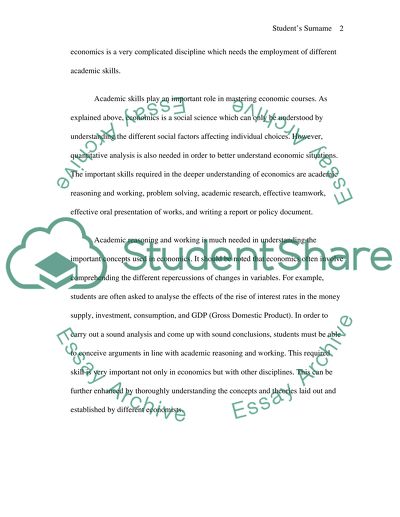 Download file to see previous pages However, as with any other social sciences, there is no definite consensus among economists on the operation of all the actors in the economy. This lead to the establishment of the rival schools of thought such as heterodox economics, institutional economics, Marxists economics, socialism, and green economics. Thus, economics is a very complicated discipline which needs the employment of different academic skills.
Academic skills play an important role in mastering economic courses. As explained above, economics is a social science which can only be understood by understanding the different social factors affecting individual choices. However, quantitative analysis is also needed in order to better understand economic situations. The important skills required in the deeper understanding of economics are academic reasoning and working, problem solving, academic research, effective teamwork, effective oral presentation of works, and writing a report or policy document.
Academic reasoning and working is much needed in understanding the important concepts used in economics. It should be noted that economics often involve comprehending the different repercussions of changes in variables. For example, students are often asked to analyse the effects of the rise of interest rates in the money supply, investment, consumption, and GDP (Gross Domestic Product). In order to carry out a sound analysis and come up with sound conclusions, students must be able to conceive arguments in line with academic reasoning and working. This required skill is very important not only in economics but with other disciplines. This can be further enhanced by thoroughly understanding the concepts and theories laid out and established by different economists.
Secondly, economics also require the skill of problem solving. It should be noted that problem solving skill is further divided into two components: the ability to analyse what is asked, what are given, and what solution is needed; and the ability to accurately use the formula to come up with the correct answer. In economics, the branch of science which deals with the mathematics in economics is called econometrics. With the advancement of technology, solving problems concerning economics is now aided by different software like STATA and EVIEWS. Thus, problem solving skill should be complemented by the knowledge and ability to use the different software to simplify economic methods.
The coursework and activities in economic courses are often designed for teams. Thus, each member should learn to work with teams efficiently, utilizing their diverse strengths and skills in finding better solutions for problems. Teamwork is often incremental as it pools together the different strengths of its members. However, it should also be noted that engaging emphasizing homework may limit the ability of a n individual to understand and analyse economic situations alike. In teamwork, it is inevitable that a member might contribute more than the others though they are given the same grade.
Knowledge is often useless unless the individual having knows how to properly and efficiently impart it. In economics, it is not just essential ...Download file to see next pagesRead More
Share:
Tags
Cite this document
(“Economics: Principles, Problems, and Policies Essay”, n.d.)
Economics: Principles, Problems, and Policies Essay. Retrieved from https://studentshare.org/miscellaneous/1506266-economics-principles-problems-and-policies

CHECK THESE SAMPLES OF Economics: Principles, Problems, and Policies

They are on trial and will be dealt with fairly. These laws ensure that no one, even if he or she has committed a crime is abused or punished cruelly.
Following the history of civilization like in china, we see the traces of systems for Criminal justice in order to provide safety for the citizens. Evolving through the years laws have been modified and changed to form the system that we know today.
From its start, the “U.S. criminal justice system” has advocated the idea of “checks and balances”. To avoid dictatorial rule, the people who founded this system in such a way that one person was not given control or authority completely to punish the criminals. The idea of assigning a ‘jury...
6 Pages(1500 words)Assignment
sponsored ads
Save Your Time for More Important Things
Let us write or edit the essay on your topic "Economics: Principles, Problems, and Policies" with a personal 20% discount.
GRAB THE BEST PAPER

Let us find you another Essay on topic Economics: Principles, Problems, and Policies for FREE!