The movie rating system should be revised - Essay Example

Comments (0)
Add to wishlistDelete from wishlist
Cite this document
Summary
The movie rating system has been established in different countries for the movies their areas produce. Its aim is to classify films according to the degree of sex, violence, profanity or any other mature content they might contain which is unsuitable for certain audiences…
Download full paperFile format: .doc, available for editing
HIDE THIS PAPERGRAB THE BEST PAPER98.2% of users find it useful 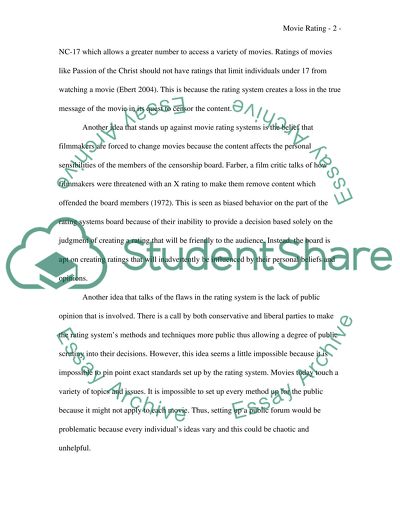 Extract of sample "The movie rating system should be revised"

Download file to see previous pages However, the rating system is not viewed as an effective and substantial body and has been criticized for a variety of reasons.
The first criticism against the motion picture rating system has been presented by film critic Ebert who claims the rating system to place more importance on the minute details of the movie rather than the movie itself. This argument stands against the system's choice of picking on intricate details of the movie like the number of times a profane word is used or the number of scenes containing violence. This allows the rating system to escape from the throes of presenting the true message of the movie. For instance, a movie with sex and violence could be discussing the consequences these activities could teach to the audience. Adult ratings should be limited to those movies which show an immense degree of sex and violence. This would help in the removal of NC-17 which allows a greater number to access a variety of movies. Ratings of movies like Passion of the Christ should not have ratings that limit individuals under 17 from watching a movie (Ebert 2004). This is because the rating system creates a loss in the true message of the movie in its quest to censor the content.
Another idea that stands up against movie rating systems is the belief that filmmakers are forced to change movies because the content affects the personal sensibilities of the members of the censorship board. Farber, a film critic talks of how filmmakers were threatened with an X rating to make them remove content which offended the board members (1972). This is seen as biased behavior on the part of the rating systems board because of their inability to provide a decision based solely on the judgment of creating a rating that will be friendly to the audience. Instead, the board is apt on creating ratings that will inadvertently be influenced by their personal beliefs and opinions.
Another idea that talks of the flaws in the rating system is the lack of public opinion that is involved. There is a call by both conservative and liberal parties to make the rating system's methods and techniques more public thus allowing a degree of public scrutiny into their decisions. However, this idea seems a little impossible because it is impossible to pin point exact standards set up by the rating system. Movies today touch a variety of topics and issues. It is impossible to set up every method up for the public because it might not apply to each movie. Thus, setting up a public forum would be problematic because every individual's ideas vary and this could be chaotic and unhelpful.
The rating system is criticized for its inability to present an equal treatment to the independent studios. This criticism lies on the belief that independent studios are not meted out with the same ratings as those given to major studios. Thus, independent studios are given a harsher rating system which is a great setback in the creation of new and diverse films. An instance of this is evident in the rating given to the movie Saints and Soldiers. The movie was created by an independent studio and created a limited amount of sex, profanity and violence. Yet, a single scene where a character is killed made the movie get a PG-13 rating (Deseret News). This is an obvious sign of bias against independent studios which can be of great harm to the creativity and emergence of unique ideas in the motion picture industry.
Thus ...Download file to see next pagesRead More
Share:
Tags
Cite this document
(“The movie rating system should be revised Essay Example | Topics and Well Written Essays - 750 words”, n.d.)
Retrieved from https://studentshare.org/miscellaneous/1506137-the-movie-rating-system-should-be-revised

CHECK THESE SAMPLES OF The movie rating system should be revised

In order to compare the welfare system of the three proposed countries, it is important to first develop a comparative method that would guide in comparing the three states. For the purpose of this paper, a binary comparison would be conducted. The implicit comparison would deal with Britain while the explicit comparison would explore the USA and Canada. Thereby a small N’ study would be used, that is, of three countries.
The three countries selected to share a similarity in the form that these countries are a welfare state. This is when welfare is mainly funded by the state. While the USA and Canada focus on the liberal welfare state, the welfare state of the UK is not quite defined.
The comparison of the welfare...
8 Pages(2000 words)Term Paper
sponsored ads
Save Your Time for More Important Things
Let us write or edit the essay on your topic "The movie rating system should be revised" with a personal 20% discount.
GRAB THE BEST PAPER

Let us find you another Essay on topic The movie rating system should be revised for FREE!