The Sleepy Hollow: The Influence of Personal Opinions - Essay Example

Comments (0)
Add to wishlistDelete from wishlist
Cite this document
Summary
This essay will argue that, in many respects, Washington Irving was heavily influenced by the historical period in which he wrote; more specifically, he was heavily influenced by the American Revolutionary War and the tensions between traditional British society and a wilder America…
Download full paperFile format: .doc, available for editing
HIDE THIS PAPERGRAB THE BEST PAPER98.4% of users find it useful 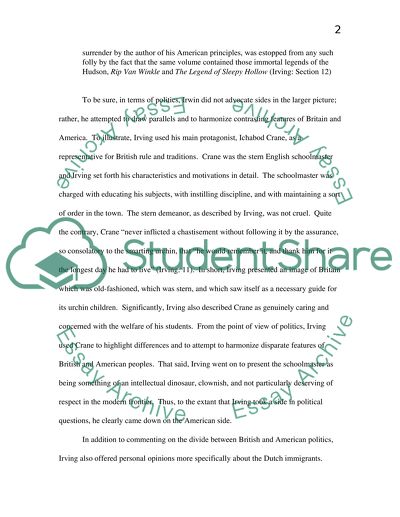 Extract of sample "The Sleepy Hollow: The Influence of Personal Opinions"

Download file to see previous pages The Dutch were referenced rather than a resort to some fictional group of people. More, the peculiarities of small-town America, in this case upstate New York, were drawn from people and practices which were witnessed by Irving rather than created solely as an imaginative effort. In short, The Legend of Sleepy Hollow was, in many ways, an intentional conveyance of personal opinions and observations by Washington Irving.
As an initial matter, it is important to place the story in its proper historical context. It was written shortly after the American Revolutionary War, and it was set in a real town in upstate New York ("The Legend of Sleepy Hollow": np). Though born an American, Irving was accused by some of harboring pro-British sentiments. A reading of the text, however, demonstrates quite clearly that Irving was more complicated in his presentation of the British-American tensions and politics; indeed, as stated by Putnam,
An American critic who might have been tempted to criticize some of the papers in The Sketch Book as unduly English in their sympathies and as indicating a surrender by the author of his American principles, was estopped from any such folly by the fact that the same volume contained those immortal legends of the Hudson, Rip Van Winkle and The Legend of Sleepy Hollow (Irving: Section 12)
To be sur...
Crane was the stern English schoolmaster and Irving set forth his characteristics and motivations in detail. The schoolmaster was charged with educating his subjects, with instilling discipline, and with maintaining a sort of order in the town. The stern demeanor, as described by Irving, was not cruel. Quite the contrary, Crane "never inflicted a chastisement without following it by the assurance, so consolatory to the smarting urchin, that "he would remember it, and thank him for it the longest day he had to live" (Irving: 11). In short, Irving presented an image of Britain which was old-fashioned, which was stern, and which saw itself as a necessary guide for its urchin children. Significantly, Irving also described Crane as genuinely caring and concerned with the welfare of his students. From the point of view of politics, Irving used Crane to highlight differences and to attempt to harmonize disparate features of British and American peoples. That said, Irving went on to present the schoolmaster as being something of an intellectual dinosaur, clownish, and not particularly deserving of respect in the modern frontier. Thus, to the extant that Irving took a side in political questions, he clearly came down on the American side.
In addition to commenting on the divide between British and American politics, Irving also offered personal opinions more specifically about the Dutch immigrants. Irving was a well-traveled man. He was familiar with and aware of the different cultural particularities of different groups. He had traveled to Europe and within America. In The Legend of Sleepy Hollow, he described the Dutch as being very industrious and very insular. They were quite content ...Download file to see next pagesRead More
Share:
Tags
Cite this document
(“The Sleepy Hollow: The Influence of Personal Opinions Essay”, n.d.)
Retrieved from https://studentshare.org/miscellaneous/1506068-the-sleepy-hollow-the-influence-of-personal-opinions

(The Sleepy Hollow: The Influence of Personal Opinions Essay)
https://studentshare.org/miscellaneous/1506068-the-sleepy-hollow-the-influence-of-personal-opinions.

“The Sleepy Hollow: The Influence of Personal Opinions Essay”, n.d. https://studentshare.org/miscellaneous/1506068-the-sleepy-hollow-the-influence-of-personal-opinions.
Comments (0)
Click to create a comment or rate a document

CHECK THESE SAMPLES OF The Sleepy Hollow: The Influence of Personal Opinions

Another challenge I faced was time management. I had limited time to study since I worked on a full-time basis. My poor time management skills worsened the matter for me. Indeed, this made me fail in my first presentation and essay despite starting work on it early enough. I had reserved two hours every day for my essay, as opposed to waiting until the last night before the presentation when I would be forced to work on it in a hurry. I also reserved time for my work-related tasks as well as relaxation in order to avoid exhaustion and boredom. However, I still failed. Still, on time management, I found it difficult to balance my time so as to have adequate time for each assignment. This could cause me to take up many tasks at the...
9 Pages(2250 words)Term Paper
sponsored ads
Save Your Time for More Important Things
Let us write or edit the essay on your topic "The Sleepy Hollow: The Influence of Personal Opinions" with a personal 20% discount.
GRAB THE BEST PAPER

Let us find you another Essay on topic The Sleepy Hollow: The Influence of Personal Opinions for FREE!