Comments (0)
Add to wishlistDelete from wishlist
Cite this document
Summary
This paper looks at issues of housing in Malta and how it will affect the young. It includes confusion of terms, deficiencies within existing housing policy, lack of regular maintenance, bad practices, meddling by politics, unaddressed rent law problems, and wrong targets. …
Download full paperFile format: .doc, available for editing
HIDE THIS PAPERGRAB THE BEST PAPER95.1% of users find it useful 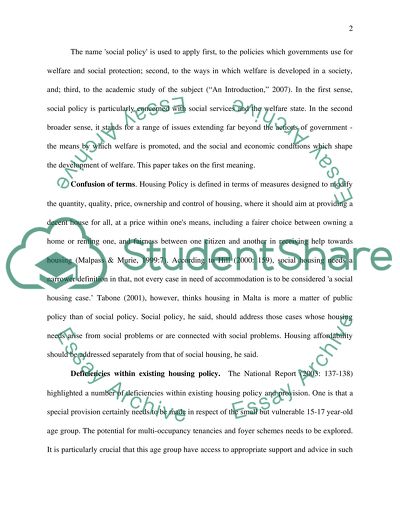 Download file to see previous pages Policymakers realize that social housing in Malta cannot be divorced from the economic, cultural and social realities. They recognized there is a group of people that should occupy the highest spot in the priority lists. An analysis of what has been done in Malta over the past fifty years however clearly indicated that the definition of social priorities was sometimes blurred (Gonzi, 2001). The Malta government also recognized that there is the need to sharpen focus on the social aspects of the housing problem. What is intriguing, however, is that the Housing Authority and the Department of Social Housing admitted no strategy for youth existed (“Report,” JCY, 2003).
Housing in Malta is one of the major problems faced by both citizens and government. The number of households exceeded the number of dwellings available, at least at reasonable prices. The gap between the price of a decent accommodation and the costs that could be afforded by the majority of the population is not simply significant, but wide enough to incur heavy burdens on many citizens, and consequently the government (Tabone, 2001). Consequently it is very easy to confuse social housing with the general housing problem with the danger of excluding the most needy.
Contemporary housing issues
The name 'social policy' is used to apply first, to the policies which governments use for welfare and social protection; second, to the ways in which welfare is developed in a society, and; third, to the academic study of the subject (“An Introduction,” 2007).
"An Introduction," 2007). In the first sense, social policy is particularly concerned with social services and the welfare state. In the second broader sense, it stands for a range of issues extending far beyond the actions of government - the means by which welfare is promoted, and the social and economic conditions which shape the development of welfare. This paper takes on the first meaning.
Confusion of terms. Housing Policy is defined in terms of measures designed to modify the quantity, quality, price, ownership and control of housing, where it should aim at providing a decent house for all, at a price within one's means, including a fairer choice between owning a home or renting one, and fairness between one citizen and another in receiving help towards housing (Malpass & Murie, 1999:7). According to Hill (2000: 159), social housing needs a narrower definition in that, not every case in need of accommodation is to be considered 'a social housing case.' Tabone (2001), however, thinks housing in Malta is more a matter of public policy than of social policy. Social policy, he said, should address those cases whose housing needs arise from social problems or are connected with social problems. Housing affordability should be addressed separately from that of social housing, he said.
Deficiencies within existing housing policy. The National Report (2003: 137-138) highlighted a number of deficiencies within existing housing policy and provision. One is that a special provision certainly needs to be made in respect of the small but vulnerable 15-17 year-old age group. The potential for multi-occupancy tenancies and foyer schemes needs to be explored. It is particularly crucial that this age group have access to appropriate support and advice in such areas as education, training and employment. Some, whose departure from the parental home may have been precipitated by family problems, might also require support from social services ("Report," JCY, 2003).
Lack of regular maintenance. As reported by Gonzi (2001), social housing in Malta is covered by the Housing Department, the Housing Authority, the Housing ...Download file to see next pagesRead More
Share:
Tags
Cite this document
(“Contemporary housing issues in Malta: effects on young people Case Study”, n.d.)
Retrieved from https://studentshare.org/miscellaneous/1506046-contemporary-housing-issues-in-malta-effects-on-young-people

CHECK THESE SAMPLES OF Contemporary housing issues in Malta: effects on young people

The event, happening in a congregational setting and in a “liturgical” space being in the synagogue on a Sabbath, was pointedly significant in that the hearers of that preaching moment were “bearers” who were in the position of religious influence and authority of the time to witness to the momentous revelation of prophetic fulfillment. Jesus intended the declaration of the fulfillment of the Word to proceed in time and to all the Earth.
A publication of the United States Conference of Catholic Bishops (USCCB) entitled “Fulfilled in Your Hearing: The Homily in Sunday Assembly” contains that the fundamental elements of Christian liturgical preaching are three: The preacher, the Word drawn fr...
6 Pages(1500 words)Case Study

The second aim is to then consider the objections to th...

...” or “hypodermic needle” model which indicates that the audience is relatively powerless in hindering the effect of media. In the said model, the influence of the media can be infused and injected to the brain of the members of the public, as shown by the Figure 1 (Mediaknowall Homepage; Perse 23). The different forms of media can be considered to have influence to change the minds and to sway the decisions of the people by presenting propagandas. In addition, another important notion in the said model is that the different background concepts such as the intelligence and the opinion of the individual regarding the issue do not hinder or affect the reception of the stimulus produced by the different forms of media. The audience...
7 Pages(1750 words)Case Study

Erving Goffman was an astute observer of society, who immersed himself in the social environment which he was studying. He carefully observed and recorded the ways in which people’s behavior and interpersonal interactions are carried out in everyday life. He notes that “people perform their social roles and, as they do so, they produce social order through their actions and the regu...
6 Pages(1500 words)Article
sponsored ads
Save Your Time for More Important Things
Let us write or edit the case study on your topic "Contemporary housing issues in Malta: effects on young people" with a personal 20% discount.
GRAB THE BEST PAPER

Let us find you another Case Study on topic Contemporary housing issues in Malta: effects on young people for FREE!