Comments (0)
Add to wishlistDelete from wishlist
Cite this document
Summary
Studies suggest that, leukemia is one of the leading causes of mortality in children under the age of 15. Other studies show that, exposure to vehicle exhaust increases the risk of childhood leukemia. The main aim of this paper is to describe and discuss the main findings and the implications of a study carried on childhood leukemia and its correlation with traffic air pollution in Taiwan.
…
Download full paperFile format: .doc, available for editing
HIDE THIS PAPERGRAB THE BEST PAPER94% of users find it useful 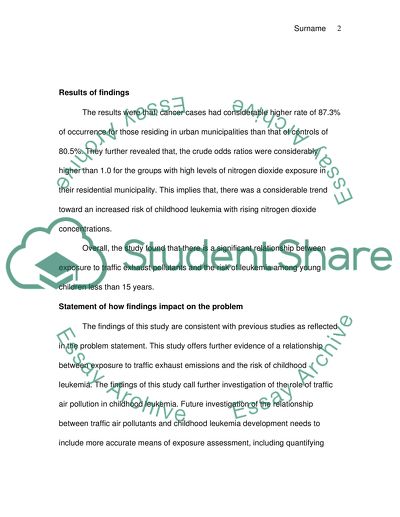 Extract of sample "Air Pollution a Silent Killer to Children"

Air Pollution a Silent Killer to Children ment of problem Studies suggest that, leukemia is one of the leading causes of mortality in children under the age of 15. Other studies show that, exposure to vehicle exhaust increases the risk of childhood leukemia. The main aim of this paper is to describe and discuss the main findings and the implications of a study carried on childhood leukemia and its correlation with traffic air pollution in Taiwan.
Research questions
Can childhood leukemia be attributed to vehicle exhaust particles
is the risk of childhood leukemia is associated with exposure to vehicle exhaust emissions
is childhood leukemia linked with effects of urbanization
Description of experimental approach
This study was carried out by Hsu-Huei Weng and others.The study was on a matched cancer case-control group using childhood deaths that occurred in Taiwan between 1995 and 2005. Data on childhood leukemia deaths were gathered from the Bureau of Vital Statistics of the Taiwan. The control group was made up of children who died from causes associated with respiratory complications. The controls were pair matched to the cases in respect to gender, year of birth, and year of death after they had been selected randomly from the set of possible controls for each case.
Results of findings
The results were that, cancer cases had considerable higher rate of 87.3% of occurrence for those residing in urban municipalities than that of controls of 80.5%. They further revealed that, the crude odds ratios were considerably higher than 1.0 for the groups with high levels of nitrogen dioxide exposure in their residential municipality. This implies that, there was a considerable trend toward an increased risk of childhood leukemia with rising nitrogen dioxide concentrations.
Overall, the study found that there is a significant relationship between exposure to traffic exhaust pollutants and the risk of leukemia among young children less than 15 years.
Statement of how findings impact on the problem
The findings of this study are consistent with previous studies as reflected in the problem statement. This study offers further evidence of a relationship between exposure to traffic exhaust emissions and the risk of childhood leukemia. The findings of this study call further investigation of the role of traffic air pollution in childhood leukemia. Future investigation of the relationship between traffic air pollutants and childhood leukemia development needs to include more accurate means of exposure assessment, including quantifying individual exposure to benzene (benzene is an established cause of leukemia in humans) and to other carcinogens.
Work cited
Hsu-Huei Weng, Shang-Shyue Tsai, Chih-Cheng Chen, Hui-Fen Chiu, Trong-Neng Wu, and Chun-Yuh Yang, Childhood Leukemia Development and Correlation with Traffic Air Pollution in Taiwan using Nitrogen Dioxide as an Air Pollutant Marker
Journal of Toxicology and Environmental Health, Part A, 71: 434-438, 2008 Read More
Share:
Tags
Cite this document
(“Air Pollution a Silent Killer to Children Essay Example | Topics and Well Written Essays - 500 words”, n.d.)
Retrieved de https://studentshare.org/miscellaneous/1505950-air-pollution-a-silent-killer-to-children

CHECK THESE SAMPLES OF Air Pollution a Silent Killer to Children

The decentralized form of the homeschooling populace limits the ability of researchers to outline conclusions on the precise effect of homeschooling on diverse outcome measures like an academic achievement (Ray). Nevertheless, assessments of homeschooled children have claimed that these students do well in that educational environment. In addition, a survey of homeschooled adults implies that homeschooling ushers in positive outcomes such as improved college enrollment and attendance.
Historically, homeschooling has been a key means for parents to offer education to their children. Most of the Founding Fathers of America went through this form of education, including Thomas Jefferson and George Washington (Coulson 120). With...
11 Pages(2750 words)Case Study
sponsored ads
Save Your Time for More Important Things
Let us write or edit the essay on your topic "Air Pollution a Silent Killer to Children" with a personal 20% discount.
GRAB THE BEST PAPER

Let us find you another Essay on topic Air Pollution a Silent Killer to Children for FREE!