Comments (0)
Add to wishlistDelete from wishlist
Cite this document
Summary
Baseball is one of the most well attended and well loved sports in the United States. Even newspaper reports recording the lowest MLB attendance do not even compare to the highest attendance in other sports such as the NBA. Consequently, one is left to wonder whether there is a need for personal marketing techniques among the baseball players…
Download full paperFile format: .doc, available for editing
HIDE THIS PAPERGRAB THE BEST PAPER97.1% of users find it useful 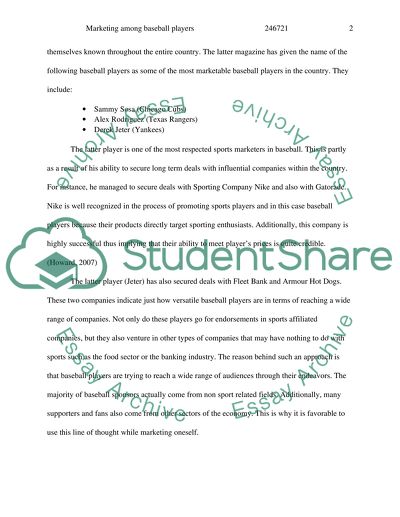 Download file to see previous pages The first major avenue that baseball players use to market themselves as sporting products is through product endorsements. Usually, players are approached by interested companies and then requested to endorse a certain product. This may be done by displaying the endorsement on television advertisements, on the cover/packaging of that particular product, through posters about the product or other media channels. (Howard, 2007)
It should be noted that many baseball players may not be as enthusiastic about endorsement deals as other players in the market. Usually, basketball players, golfers and tennis players are greatly associated with this form of advertising in comparison to base ball players. Despite this low turnout, a few players have exploited this avenue. For instance, a number of magazines such as "Sports Daily" have been targeting sports marketing within the country. They have explained just how some baseball players utilize television advertisement to make themselves known throughout the entire country. The latter magazine has given the name of the following baseball players as some of the most marketable baseball players in the country. They include:
The latter player is one of the most respected sports marketers in baseball. ...
Nike is well recognized in the process of promoting sports players and in this case baseball players because their products directly target sporting enthusiasts. Additionally, this company is highly successful thus implying that their ability to meet player's prices is quite credible. (Howard, 2007)
The latter player (Jeter) has also secured deals with Fleet Bank and Armour Hot Dogs. These two companies indicate just how versatile baseball players are in terms of reaching a wide range of companies. Not only do these players go for endorsements in sports affiliated companies, but they also venture in other types of companies that may have nothing to do with sports such as the food sector or the banking industry. The reason behind such an approach is that baseball players are trying to reach a wide range of audiences through their endeavors. The majority of baseball sponsors actually come from non sport related fields. Additionally, many supporters and fans also come from other sectors of the economy. This is why it is favorable to use this line of thought while marketing oneself.
An example of one of the advertisements made by a baseball player was the Visa advertisement of 2004. In this advertisement, Yankees player Jeter is depicted as a baseball player who has wronged his team owner. The latter role was also played by the actual Yankees team owner. In this advertisement, the baseball player is asked just how he manages to go out all night but still play a good game of baseball. In response to this, the baseball player show his visa card and even opts to take the team owner out for a night out. When asked to comment about their use of the baseball player in their advertisement the Visa vice president Madam Silver claimed that the ...Download file to see next pagesRead More
Share:
Tags
Cite this document
(“Marketing among Baseball Players Essay Example | Topics and Well Written Essays - 2250 words”, n.d.)
Marketing among Baseball Players Essay Example | Topics and Well Written Essays - 2250 words. Retrieved from https://studentshare.org/miscellaneous/1505801-marketing-among-baseball-players

CHECK THESE SAMPLES OF Marketing among Baseball Players

Nutrition is pivotal for growth and progression of normal life and also a disease-free life. It is imperative for everybody and much more important in the case of children and infants because they are in their maximum growth stage. Malnutrition at this stage can have serious repercussions for the...
10 Pages(2500 words)Coursework
sponsored ads
Save Your Time for More Important Things
Let us write or edit the essay on your topic "Marketing among Baseball Players" with a personal 20% discount.
GRAB THE BEST PAPER

Let us find you another Essay on topic Marketing among Baseball Players for FREE!